At the dawn of the 19th century, when Paolo Mascagni hired Clementi Susini to help him make wax models of the human lymphatic system including the brain, he probably had no idea he was setting himself up for centuries of ridicule. In a 2003 piece about 18th-century science in The Lancet, his “mistake” was condescendingly explained: “Mascagni was probably so impressed with the lymphatic system that he saw lymph vessels even where they did not exist — in the brain.” That sentiment reflects what scientists have long believed. And then lymphatic vessels were found in the dura mater, the membrane covering the brain, of mice by a team from University of Virginia in 2015. The researchers noted, “The discovery of the central-nervous-system lymphatic system may call for a reassessment of basic assumptions in neuroimmunology.” Ah, sweet vindication, 300 years later.

The human lymphatic system transports lymph, a fluid in which our cells bathe and that carries away waste, toxins, and other cellular debris. Lymph is also an important element in our immune systems, containing white blood cells for fighting infection, and the lymphatic system delivers them to the 600-700 lymph nodes around the body, and to organs, to fight off infections.

The human brain’s lymphatic vessels were discovered by a team led by NIH neurologist and radiologist Daniel Reich, who specializes in multiple sclerosis. Since patients’ immune systems seemed somehow to be involved in inflammatory brain disease, and central nervous system cells produce waste like other cells do, he wondered why the brain wouldn’t have a lymphatic system that could account for both things. How was that waste being washed away anyway?

When a study was published in 2015 announcing the discovery of “a macroscopic waste clearance system that utilizes a unique system of perivascular channels, formed by astroglial cells, to promote efficient elimination of soluble proteins and metabolites from the central nervous system,” it seemed like he might have the beginning of an answer. Since it was also found that the system transported lipids, glucose, lipids, neurotransmitters, and amino acids, it was dubbed a “glymphatic system.” However, since “the central nervous system (CNS) completely lacks conventional lymphatic vessels,” exactly how the system worked was not yet understood.

Mindful of the dura mater lymphatic vessels in mice, Reich’s team developed an MRI method for imaging the brains of humans and marmosets that could identify lymphatic vessels — carefully differentiated from similar-looking blood vessels — in their dura mater. (They believe their findings would also be verifiable with autopsy tissue.)

The marmosets and human volunteers were injected with gadolinium, a dye-like fluid that normal blood vessels can’t hold — it leaks out of them. On the other hand, lymph vessels can successfully contain gadolinium. Once the gadolinium reached the dura mater, it became relatively easy to separate out the lymphatic vessels from the blood vessels: They were the ones that showed up on the MRIs as bright white areas containing gadolinium. As a double-check, they injected another dye that blood vessels can hold onto, and found that it never found its way out of them and into the suspected lymphatic vessels. 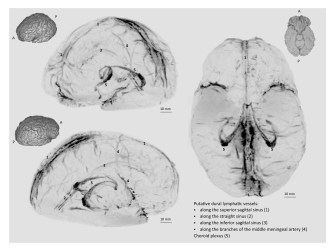 Now that we know the brain has lymphatic vessels, it becomes, as Reich’s team states, “possible to study how the brain removes waste products and circulates white blood cells, and to examine whether this process is impaired in aging or disease,” and that the discovery, after all this time, of lymphatic vessels in the dura mater of humans “holds promise for better understanding the normal physiology of lymphatic drainage from the central nervous system and potential aberrations in neurological diseases.”

Research from NASA reveals Mars’ spectacular volcanic past.
Up Next
Surprising Science

With a 5-10 year warning, we could develop a plan to change an asteroid’s trajectory.