Last week was a bad week for depression. We lost two cultural icons. Kate Spade’s name is ubiquitous in the fashion world. A few days later, waking up at 5 am to discover that Anthony Bourdain took his own life made me do a double, then triple take at my screen. The grief remains palpable for many of us.

There is no singular reason for suicide. In a recent episode of Revisionist History, Malcolm Gladwell discusses the insidious, deadly effects of encephalopathy. Football players suffer tragic consequences from repetitive poundings taken on the field. One of the most emotional episodes of Vice on HBO dealt with the right to die. Euthanasia should be legal for the terminally ill.

But what of us who just feel dissatisfied with life to the point of suffering from a chronic lack of meaning? Depression is often at the root of suicide. No matter how Logic’s massive hit positively impacted the world, suicide rates continue to climb. This shouldn’t be surprising, considering depression rates have also been increasing. That doesn’t make it any less shocking when you run into the consequences of statistics once again. You rarely know the depths of someone else’s pain.

While correlation does not always imply causation, these two increasing rates coincide with another: the Internet. Trace the footsteps of each new advancement—widespread adoption of the cell phone, the introduction of the iPhone, the contagion effect of social media—and you find increasing dissatisfaction across the nation. Time spent on devices must be subtracted from other activities, and often those activities involve physical movement. Convenience is never free.

When people say we’re disconnected from nature, what they really mean is we no longer move our bodies. We can pinpoint any geographical location on the planet on a screen, yet what good is this knowledge if we never pass through it? Every digital breakthrough seems to render us more immobile. Some point to a loss of meaning as the philosophical underpinning of suicide, yet what meaning is possible without movement? Even thinking triggers motor neurons. We were built for movement.

An ability to move through our environment created the brains we have. Spatial navigation forms and informs important traits: memory, endurance, creativity, dexterity, ingenuity. Movement makes us healthy. When surrendering this birthright, of course we’ll feel depressed.

This is not to claim that lack of movement is the only cause of depression. But it’s certainly an important one. What also shouldn’t surprise us is that exercise reduces rates of depression. Reclaiming what is inherently ours makes us feel good about ourselves. A lifting of depression has been observed in running, yoga, meditation, even walking through forests. Now we can add weightlifting to this list.

This isn’t the first research paper to address this issue; I wrote about prior studies on this site years ago. But this review of dozens of studies offers the first quantitative synthesis of the relationship between resistance exercise training (RET) and depression. Covering 33 randomized clinical trials with 1,877 participants, this is the first time we have a large pool to investigate, and the results are satisfying.

The research paper, led by graduate student Brett Gordon at Ireland’s University of Limerick, notes that 300 million people suffer from depression worldwide, costing the global economy $118 billion. Medication, the authors continue, can be expensive and efficacy is questionable, while psychotherapy is sometimes inaccessible as well as costly. A gym membership might not be the end-all, but it is certainly less expensive and undoubtedly healthier. 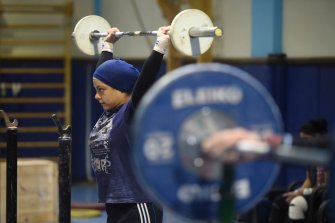 After reviewing the literature, Gordon and team found that regardless of age, sex, or health status, RET is “associated with a significant reduction in depressive symptoms.” The largest gains were found in adults with elevated symptoms, which gave the researchers hope that RET “may be particularly helpful for reducing depression symptoms in people with greater depressive symptoms.” They also found that supervised workout sessions resulted in larger gains than in unsupervised sessions.

As Gordon says, it’s impossible to blind people for this sort of research—you know who is lifting weights and who is not. As with most studies, the placebo effect could be at work. But given all we know about the benefits of exercise, this is a placebo with few side effects (overexertion and muscle strains being the most prominent). The benefits outweigh any potential risk.

The neurochemistry of movement is beneficial to everyone, including those not suffering from depression. It could be argued that regular exercise staves off depressive symptoms from regular gym goers so that problems never arise. While weightlifting is often associated with “bulking up,” such ambitions were absent from study participants: “All that mattered was showing up and completing the workouts.”

Though we often associate lifting weights with a particular mindset, historically humans always loaded their bodies—carrying water from the river, chopping wood, clearing forests, building shelter. It’s only until quite recently when all physical exertion was removed from our daily activities. Trace the depression scale from the beginning of the Industrial Revolution and you might find further data to contemplate. Biologically and emotionally we are designed to use our bodies. The results of not doing so are unlikely to be positive.

Related
Health
New blood types are often discovered following medical disasters
New blood types are regularly discovered by an unusual absence or an unusual presence — both of which can result in tragedy.
The neuroscience of loving music
Humans are musical animals four million years in the making, explained by music expert Michael Spitzer.
▸
8 min
—
with
Michael Spitzer
Life
Scientists use CRISPR to insert an alligator gene into a catfish
Disease kills off 40% of farmed catfish. This gene protects them.
Neuropsych
How you breathe affects your brain
Your breathing rhythm influences a wide range of behaviors, cognition, and emotion.
Health
What happens when regular porn watchers abstain for a week?
Researchers watched for signs of withdrawal — but didn’t find any.
Up Next
Starts With A Bang
This Is Why The Event Horizon Telescope Still Doesn’t Have An Image Of A Black Hole
The data has been taken, collected, and analyzed. So where is the first image of an event horizon, already?Across multiple continents, including Antarctica, an array of radio telescopes observe the galactic […]