We may remember torture scenes from certain movies or books, such as One Flew Over the Cuckoo’s Nest, where shock treatment was used to silence dissent and make patients docile. Once a common treatment, it fell out of favor in the 1940s—perhaps because it was introduced to the US at the same time as the lobotomy—and was replaced by talk therapy and medication. Now, however, experts claim that with certain diagnoses such as major clinical depression, electroconvulsive therapy (ECT) may be the best option.

ECT is effective in cases of major depression especially when the person is having suicidal thoughts or mania, medication will take too long to take effect, or the person might harm themselves in the interim. Physicians aren’t enthusiastic in prescribing it, however, and instead think of it as a last resort. Although the type introduced in the 20th century was as brutal as Kesey’s novel describes, modern incarnations are far less severe.

For this procedure, the patient is first put under general anesthesia. Then, electrodes are placed on the scalp and highly controlled electrical current is applied to the prefrontal cortex of the brain—the area responsible for mood. Electrical stimulation moves through the scalp into the brain, causing a small seizure.

This is usually the part patients are most worried about. However, practitioners agree it’s perfectly safe. Side effects only occur when the staff administering it is poorly trained or the equipment is used improperly. When the seizure occurs, the hands and feet may jump a little bit. But that’s it. A patient may receive treatments up to three times per week for 2-4 weeks. 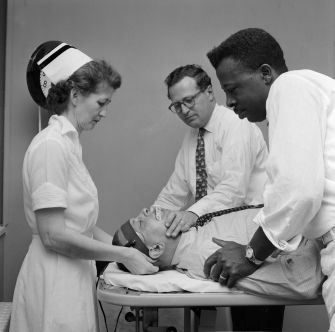 Commonly used in the 1940s and ‘50s, shock treatment fell out of favor as it became considered barbaric by the general public. But experts today say it’s perfectly safe and can offer certain patients relief. Image credit: Getty Images.

So how effective is it? A 2012 study found that over half of patients who underwent ECT found significant relief in the aftermath. Now a study, published recently in the journal JAMA Psychiatry, finds that for those with major depression, for whom talk therapy and medication are ineffective, ECT may be their best bet. Researchers at the University of Michigan, Ann Arbor conducted the meta-analysis.

They examined data from three large studies and determined which patients had received ECT and whether they improved, comparing them to others who underwent different treatment options. A combination of anti-depressants and talk therapy worked best. But when these failed, ECT was the next best alternative. 50% of those patients who underwent ECT had no symptoms afterward. Only 25% of those given a second antidepressant went into full remission, while patients who received a third pill felt full relief just 15% of the time.

Eric L. Ross was the lead author of the study. He told Medical News Today. “Although choosing a depression treatment is a very personal choice that each patient must make with their physician based on their preferences and experience, our study suggests that ECT should be on the table as a realistic option as early as the third round of care.”

Previous studies have shown that many depression sufferers undergo different treatments over long periods, often years, and sometimes find little relief. The longer it goes on, the less of a chance of full remission. ECT may offer hope. Unfortunately, the stigma and the high cost of treatment stand in the way of those who might otherwise benefit from it. A lot of work will have to be done to reverse the stigma—and bring the cost down.

Carl Jung was one such person.
Up Next
Technology & Innovation

What would it cost to move some of the world’s most famous landmarks to new locations?