Dementia is a broad term that covers several types of neurodegenerative disorders which affect a person’s ability to think, learn, recall memories, and perform everyday activities. This deterioration of the brain’s cognitive function is not considered part of the normal process of aging and it affects more than 47 million people worldwide, with 7.7 million new cases every year.

Alzheimer’s disease (AD) is the most common cause of dementia, contributing to 60-70% of cases and has a significant social and economical impact. Evidence suggests that changes on the molecular level that contribute to the development of the disease can occur as far back as 25 years prior to any noticeable symptoms. 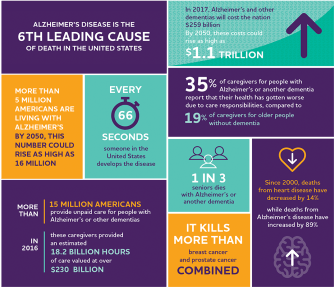 Recently, researchers have been exploring the connection between AD and post‐traumatic stress disorder (PTSD). Epidemiological data shows that people with PTSD at a young age have an increased risk of developing AD in old age. A study from 2010, looked at data from 181,093 U.S. veterans and found that those diagnosed as having PTSD were nearly 2 times more likely to develop dementia compared with those without PTSD.

People with PTSD have an impaired mechanism, called fear extinction, that causes them to continue having a stress response to a stimulus that is no longer a threat. Normally, through processes like cognitive flexibility and extinction learning the individual would stop having such a response to the stimulus that once caused the traumatic event.

In a recently published study, scientists aimed to discover some of the mechanisms that link PTSD and AD. They observed that age‐associated memory decline is most likely a direct consequence of the reduced expression of a gene called Formin 2 (FMN2). Loss of FMN2 in young mice caused PTSD-like symptoms and also led to accelerated age-associated memory decline. In the tested mice deficits in fear extinction preceded the impairment of memory consolidation.

FMN2 has been associated with intellectual disability and is essential for extinction learning and cognitive flexibility. Both PTSD patients and AD patients have been shown to have a decreased FMN2 expression. The researchers determined that FMN2 levels are altered in blood samples from PTSD patients which may indicate that exposure to PTSD‐inducing events may alter FMN2 levels in the brain.

The link between dementia and PTSD has also been highlighted in another recent study, where researchers caution that delayed-onset post-traumatic symptoms in older people may be misdiagnosed as part of the symptoms of dementia.

“Every patient with dementia has a unique narrative, which if captured in the earlier stages of the disease, enables clinicians and their families to understand the origin of their distress. Therefore, it is important to look for a history of previous trauma in patients with BPSD as this could be due to delayed onset PTSD.”

For the very first time, an AR contact lens was worn on the eye of a human subject. And it has about 30 times the pixel density of an iPhone.
Up Next
Politics & Current Affairs

The cost-effectiveness of green technology makes it tough to ignore.