Hitler seemed obsessed with the idea of infection. The Nazi leader was, by most accounts, a germaphobe who avoided personal contact and bathedincessantly. He was repelled by sex, horrified by venereal disease. He referred to himself as an Einsiedler – a hermit. He extolled the virtues of celibacy and claimed prostitution was for inferior races, though some have proposed Hitler himself contracted syphilis from a Jewish prostitute in Vienna in 1908.

It was in ideology, however, where Hitler’s obsession with infection thrived, becoming the essential Nazi metaphor: Germany was the body, Jews were the parasites.

Examples are abundant in his speeches and writings:

“How many diseases have their origin in the Jewish virus! We shall regain our health only be eliminating the Jew.”

“Anyone who wants to cure this era, which is inwardly sick and rotten, must first of all summon up the courage to make clear the causes of this disease.”

“This is the battle against a veritable world sickness which threatens to infect the peoples, a plague that devastates whole peoples…an international pestilence.”

“The Jew is a parasite in the body of other nations.”

“Germany, without blinking an eyelid, for whole decades admitted these Jews by the hundred thousand. But now… when the nation is no longer willing to be sucked dry by these parasites, on every side one hears nothing but laments.”

“If this battle should not come…Germany would decay and at best sink to ruin like a rotting corpse.”

Do Hitler’s germaphobic tendencies and obsession with the infection metaphor reveal anything about his personality traits? While it’s impossible to know for sure, it seems likely that he was highly sensitive to disgust.

Over the past couple of decades, studies have linked disgust sensitivity to numerous dimensions of ideology – immigration, political affiliation, sense of justice. If Hitler ranked high on the disgust scale, there were probably deeply rooted psychological forces lurking underneath his xenophobia and murderous fantasies that research on the behavioral immune system might help bring to light.

How disgust relates to personality and ideology

Disgust is a protective emotion. It causes us to lurch back from a rotten apple, or take an extra big step over dog poop on the sidewalk. These reactions are part of the behavioral immune system, which evolved to help us detect and avoid things in our environment that cause disease. That’s why we find some things universally repulsive – urine, feces, vomit.

What’s strange, however, is that an acute sense of disgust can extend beyond these things and into the social world, causing some to feel repulsed by certain ethnic groups. This might have once served an evolutionary function: In earlier times, it was probably useful to be wary of unfamiliar individuals or groups because they might have carried disease.

Today, this same evolutionary function might be playing a role in the immigration debate. According to a recent paper, people who are acutely sensitive to disgust are more likely to oppose immigration. The researchers explained:

It is the presence of physically and culturallydistinct immigrants that poses a threat to individuals concerned about pathogens, not the intentions of the immigrants. Second, individuals motivated by pathogen avoidance are especially motivated to avoid contact with immigrants, potentially preventing the sorts of experiences that may engender tolerance. Taken together, these findings demonstrate that the behavioral immune system emerges as a potent—and distinct—obstacle to inclusive attitudes and tolerance.

Other studies have linked high disgust sensitivity to: 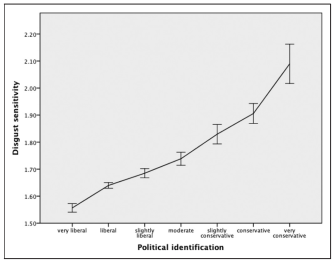 Hitler arguably qualifies for almost every dimension to which high disgust sensitivity is linked. Professor of Psychology Jordan Peterson elaborates on the connection between disgust and Nazism in the video below, about an hour into the lecture:

Still, how could one leader’s disgust-oriented rhetoric have influenced an entire country?

Metaphor and the Final Solution

The use of metaphoric language in Nazi Germany has been studied at length since the end of World War II. On a psychological level, the dehumanization of the Jewish population through language was crucial in carrying out the Final Solution because deeming the Jews to be rats or parasites made extermination the logical and “necessary” course of action.

Some have considered the Nazi use of metaphorical language to be a “rhetorical trick,” a cynical manipulation of the cultural conversation to advance a murderous fantasy. But others, like Andreas Mulsoff, who penned Metaphor, Nation and the Holocaust, thought Hitler’s parasite metaphor sat at the bedrock of his ideology, conveying his “fundamental cognitive processes” and serving as an “integral part of the ideology that made the holocaust happen.”

In his essay The Jewish Parasite, Alex Bein argues that Nazi ideology captivated the German people through repeated use of words and concepts that eventually led to “belief in the reality of a fantasy.” Richard A. Koenigsberg, author of the seminal Hitler’s Ideology, elaborated:

“In language, Bein explains, thoughts and conceptions are mirrored. Nazism crept into the flesh and blood of the masses by means of “single words, terms and phrases, and stock expressions” which, imposed upon the people a million times over in continuous reiteration, were “mechanically and unconsciously absorbed by them.” The presentation of Jews as corroding and poison parasites as vermin, bacteria and bacilli—everywhere infecting and striving to destroy the body of the German people— “paralyzed any internal resistance on the part of the masses.”” 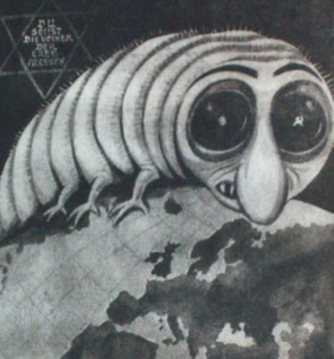 A recent study suggests that disgust-oriented language can wield surprising power over our biases. ResearchersLene Aaroe, Michael Bang Petersen and Kevin Arceneaux asked two groups of participants to read a passage about a hospital employee coming in contact with bodily fluids. The passage given to one group, however, included an addition part in which the hospital employee thoroughly washes his hands. Anti-immigration sentiment dropped by 47 percent among this group, leading researchers to claim:

The findings imply that threats of actual infection need not be present in order for our sense of disgust to unconsciously affect how we see groups of people. Mere language can accomplish that.

Nazi supporters held huge rallies and summer camps for kids throughout the United States in the 1930s.
The Present

Like it or not, you can’t ignore how people look or sound

The trouble with judging historical figures by today’s moral standards

Monuments are under attack in America. How far should we go in re-examining our history?
The Present

Numerous U.S. Presidents invoked the Insurrection Act to to quell race and labor riots.
The Present

How pandemics are used to promote racism and xenophobia

The current focus on the Chinese and Jews is nothing new.
Up Next
Surprising Science

Does the Human Brain Operate Outside of the Laws of Physics?

Some scientists posit that our brains are actually quantum computers.