A new study published in the journal Frontiers in Neuroscience finds that just 10 minutes of mindfulness meditation can improve a person’s cognitive abilities, provided they’re not too neurotic to begin with. According to Hedy Kober, senior author and associate professor of psychiatry and psychology at Yale, “We have known for a while that people who practice meditation for a few weeks or months tend to perform better on cognitive tests, but now we know you don’t have to spend weeks practicing to see improvement.” She adds, “We don’t know if longer meditation sessions, or multiple sessions, would improve their cognitive scores, and we look forward to testing that in future studies.” Her co-lead on the project was Catherine Norris at Swarthmore.

How the studies worked

The researchers performed two studies on male and female Swarthmore students. Subjects of the first were 37 students, a third of them female. The second involved 56 students, divided about evenly between male and female.

Subjects’ cognitive capabilities were divided into response times—“RTs”—and levels of accuracy as they performed Flanker tasks. A Flanker task presents you a string of five characters (or colors, or images, etc.) arranged in a row. Your job is to press a specified keyboard key when you see one of a particular pair of characters in the middle position, or a different key when you see one of another pair. (You can take an online Flanker task demo to see for yourself what it’s like.)

Sometimes the non-relevant characters on either side of the central character are the same as the central character. Such a trial is called “congruent.” If the surrounding characters are not the same as the central one, they’re “incongruent.” Previous studies have found that the brain processes congruent and incongruent Flanker trials differently, even if you think you barely notice anything outside the center. A Flanker task activates your anterior cingulate cortex, or ACC, and the level of activity is higher for incongruous tasks, at least initially.

In the first study, students were divided randomly into two blindfolded groups—the blindfolds were to reduce distractions as they listened. One group listened to a 10-minute meditation/mindfulness audio recording presenting mindfulness-based stress reduction, or MBSR. The other group listened to a 10-minute control recording. The control recording matched the MBSR recording “on number of words, word frequencies, voice, cadence, and length,” although, of course, with different content.

After listening to the MBSR recording or the control recording, the now-unblindfolded subjects were introduced to Flanker testing and allowed 12 trial runs before the official test. Afterward, each filled out a Big 5 Personality Inventory to help track the effect of neuroticism in the data. There’s been a lot of interest on whether or not meditation can help alleviate neuroticism; in this study, things were reversed, with neuroticism adversely affecting meditation’s potential effects. Each subject also took a demographic survey and was debriefed.

In the second study, researchers took a slightly different tack. The Flanker task was a more extended “attention network test,” or ANT. Subjects were given instructions on the test and given 24 practice trials before being outfitted with EEG electrode nets for real-time monitoring of brain activity — “the researchers wanted to investigate neural correlates of the effects of meditation on attention.” After listening to the recording or a control recording, subjects performed the ANT Flanker test. Afterward, the electrodes were removed, and the subjects were again given a Big Five test as well as a demographic survey, and finally, debriefed.

Response time (RT): There was no difference in RTs when the group performed congruent Flanker tasks compared to those who didn’t.

Accuracy: Interestingly, although MBSR subjects performed significantly more accurately than the control group with incongruent trials, there was no discernible difference between them on congruent trials. It may be that meditation helps reduce the stress inherent in the more confusing incongruent trials. 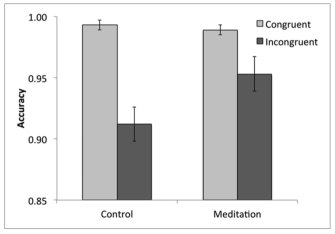 The MBSR group was more accurate on incongruent trials than the control group. Congruent accuracy was about the same. (Credit: Kober, et al)

Effect of neuroticism: Researchers found “individuals higher in neuroticism did not exhibit any performance boost following meditation. Neuroticism may thus prevent individuals from reaping the benefits of an initial, brief meditation.”

Overall: Study 1 found “a brief 10-min guided mindfulness meditation instruction period can improve executive attentional control even in naïve, inexperienced meditators. This is a novel and important finding, suggesting that individuals who are merely initiating a meditation practice may reap benefits after a single brief session.”

Response time: For correct Flanker responses, ANT subjects had quicker RTs than the control group for both congruent and incongruent tasks.

Accuracy: There was no significant difference in accuracy between the ANT group and the control group.

Effect of neuroticism: Study 2 found slightly lower RTs for this personality type with both the control and ANT group. 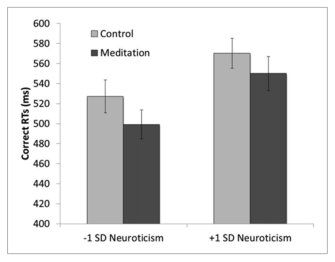 With less neuroticism (on the left) both groups had quicker RT times for correct answers/ With more neuroticism, they both slowed down. (Credit: Kober, et al)

EEG differences: The authors found no discernible differences in the EEGs between the two groups or for congruent/incongruent trials.

Overall: Subjects in Study 2 had a less rushed experience than those in Study 1, with short breaks, and thus they may have been able to demonstrate “faster correct RTs overall, regardless of trial type, consistent with the conclusion that they were better able to focus and respond (correctly) more quickly than those in the control condition.”

“Of primary interest is that a brief meditation period did affect performance in both studies,” says the study of the increased RTs seen with meditation, leading them to conclude that while more study of this is warranted—factoring in different mediation/mindfulness methods, for example, or the level of commitment on the part of subjects—“a brief guided meditation may improve executive attention, but the manifestation of that improvement may depend strongly on the task being performed.”

Related
Neuropsych
How you breathe affects your brain
Your breathing rhythm influences a wide range of behaviors, cognition, and emotion.
Health
What happens when regular porn watchers abstain for a week?
Researchers watched for signs of withdrawal — but didn’t find any.
Neuropsych
Daily caffeine intake temporarily alters your brain structure
Compared to people who took a placebo, the brains of those who took caffeine pills had a temporarily smaller gray matter volume.
Thinking
Why you should laugh at yourself, according to Seneca and Nietzsche
“It is more human to laugh at life than to lament it.”
Hard Science
The violence of the Tonga eruption is a wake-up call to watch other submarine volcanoes
Out of sight, but not out of mind.
Up Next
21 New Learning Opportunities We Launched in July
The Big Think+ team is thrilled to present 21 new videos!