We aren't lunarly exclusive. Earth has a few minimoons whizzing around us, including one that comes back into our orbit every 20 years or so. 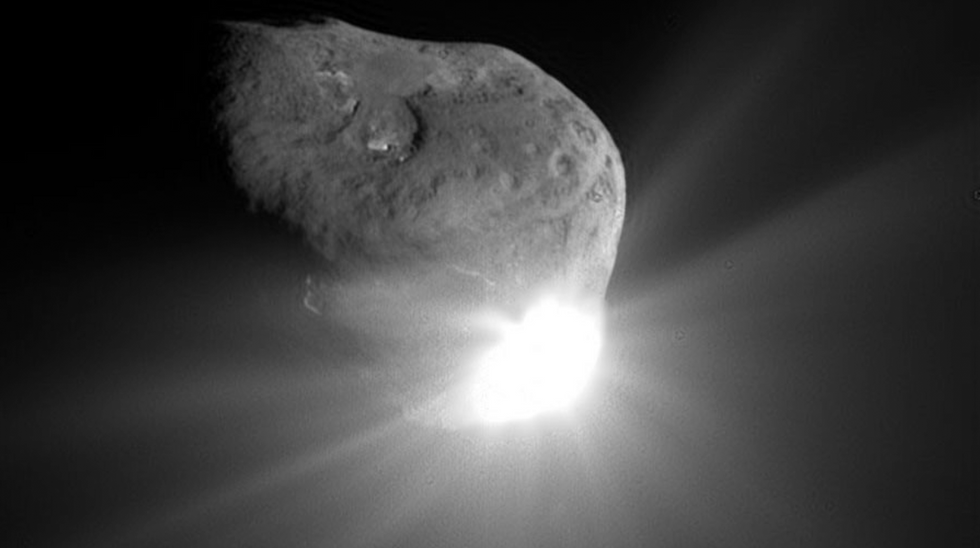 An asteroid of approximate size of a minimoon, c/o NASA

For nearly four billion years, Earth and the Moon have been inseparable as they’ve journeyed together through the cosmic void. It’s our only permanent satellite we’ll ever know. But new research has unearthed (...unmooned?) evidence that our planet occasionally captures “mini-moons” every once in a while. These tiny asteroids zoom around our planet as temporary natural satellites.

The implications for this carries with it scientific and even commercial opportunities for our new space-age renaissance. A cadre of astronomers and scientists reviewed the history, properties and future potential that these mini-moons will have in a number of fields, scientific disciplines, and markets. These natural objects are referred to as either temporarily captured objects (TCO) or temporarily captured flybys (TCF.) The researchers stated that their inspiration for the name came from Austin Powers:

"As an homage to the Moon and Austin Powers we usually refer to TCOs and TCFs as “mini-moons” though, to be more precise based on their relative diameters, they may more accurately be considered micro-moons."

How it was discovered

The existence of mini-moons was thought to be unlikely by a number of astronomers and even impossible because current data and asteroid surveys had shown no sign of natural geocentric objects in orbit. It’s possible that due to the incredibly small relative size of these objects, which are often moving too fast and are sometimes faulty labeled artificial – the discovery of mini-moons had continued to elude us.

Our Moon is roughly a quarter the size of our planet, which makes mini-moons infinitesimally small in comparison. These fast-moving and transient objects are difficult to detect, even though there may be loads of them floating around the planet. Mini-moons usually measure anywhere from 3 to 10 ft in diameter. Sometimes they’ll elope with our orbit for just a quick swing before going right back to revolving around the sun. There is still a lot to learn about these objects.

Twelve years ago, the first and only other mini-moon was detected by astronomers by the Catalina Sky Survey organization. It was named 2006 RH120 and measured to be 6 to 10 ft in length. It’s thought to enter Earth’s orbit around every 20 years. It remains our only known mini-moon for now.

There was some controversy over the nature of the object after discovery on whether or not it was another artificial object or really the first natural object known to be orbiting us besides the moon. From the white paper of the study:

“Several launch vehicle booster stages have achieved sufficient speed for them to escape the gravitational bonds of the EMS only to be subsequently recaptured in the system after a few decades. Subsequent astrometric observations of 2006 RH120 established its provenance as a natural object because the perturbations to its trajectory caused by solar radiation pressure were inconsistent with it being artificial.”

It’s expected that in the near future, advances in astronomical surveys will allow us to discover even greater quantities of mini-moons.

According to the researchers, there are a few more ways to detect these objects in the future:

Discovering a little teeny mini-moon might seem minuscule, but this research might help us better understand the nature of asteroids around the solar system, Earth-to-moon system relations and a whole host of other commercial and celestial data.

What are the implications of mini-moon research?

To say there’s a lot we still don’t know about the universe is an understatement, a phenomenon in our own extraterrestrial backyard is still shrouded in mystique. One thing we could learn from the study of mini-moons is the interior structure of meteoroids and asteroids. The range of different hypotheses on the insides of asteroids of any size varies significantly. The authors of the study state:

“There is essentially no data to constrain models that range from ‘sandcastles’ held together by cohesive forces to solid, monolithic structures.”

Meteorites that crash to Earth only give us a slight picture of what constitutes an asteroid. The Earth’s atmosphere strips away a lot of material contained within and on the objects. Mini-moons could become new quick destinations for space missions, where we could grab them and go back to earth without worrying about the effects of atmospheric forces.

Before we start studying and sourcing these mini-moons, we first have to have a way to detect and find them. Currently, there is a telescope being constructed in northern Chile called the Large Synoptic Survey Telescope (LSST) – this telescope is up to the task of mini-moon sighting.

The authors of the paper believe that mini-moons will lead us to a number of new places that will benefit research and commerce:

(1) The development and testing of planetary defense technologies (e.g., deflecting an asteroid)

(4) Establishing the feasibility of asteroid mining technologies for future commercial applications, all in an environment where the round-trip light-time delay is a few seconds. This short list illustrates that minimoons have far-reaching non-science implications for different stakeholders.

Once we begin discovering and tracking mini-moons at a greater rate, we can send out satellite missions for either retrieval or study. These cheaper missions will be a great way to help jumpstart a soon to be burgeoning space mining industry.

The many moons in our Solar System

As we one day begin to recognize more mini-moons and add them to the local neighborhood, we should be able to understand what constitutes the classification of a “moon.” Our planet is at the top of the list when it comes to the primary planet to satellite mass ratio. In general, the term moon denotes an object that is orbiting something other than the main star in the solar system. So in this regard, our moon is similar to the moons circling Mars, Jupiter or other planets. Moons are not determined by what they’re made out of, their size, or mass.

We determine what makes a moon by the way it moves throughout the solar system and what its relation is to other celestial bodies. For example, classification by motion allows us to determine the dynamics of our solar system by looking at the gestalt of movement, rather than categorizing by an arbitrary division.

Our moon’s composition is similar to the other four terrestrial planets in the inner circle of the sun: Mercury, Venus, Earth, and Mars. All of these planets have rocky surfaces and geological layers. But this doesn’t mean that the Moon can be classified as a terrestrial planet – again this is determined by motion.

A planet can gather a number of natural satellites through the force of its gravity. Other planets in our solar system have a whole load of big moons. For example, Jupiter has 79 confirmed moons and Saturn has 62 confirmed moons.

Jupiter’s Ganymede is larger than both Mercury and Pluto and 2/3rds the size of Mars, but again it orbits Jupiter so it is considered a moon.

The moons of our solar system and mini-moons of Earth may one day prove to be the literal stepping stones for the rest of the galaxy. *Editor's note: A version of this story published on the site late yesterday had a misleading title; apologies for the confusion—I worded it poorly and take full responsibility. —Ned
From Your Site Articles