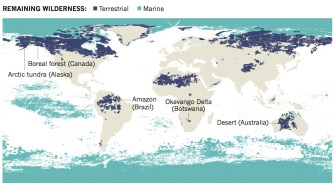 Human exploration and activity has transformed the natural world, and a paper recently published in Nature gives us some numbers to accompany our sense of that ever-snowballing change. The Wildlife Conservation Society summarizes it in a news release: “23 percent of the world’s landmass can now be considered wilderness, with the rest—excluding Antarctica—lost to the direct effects of human activities.”

The criteria by which the Nature paper examined Earth included a focus on built environments, crop and pasture lands, population density, night-time lights, roadways, railways, and navigable waterways, and the scale of the details found using that criteria are shocking, as the authors, James E. M. Watson, James R. Allan and colleagues, write:

“Between 1993 and 2009, an area of terrestrial wilderness larger than India — a staggering 3.3 million square kilometres — was lost to human settlement, farming, mining and other pressures. In the ocean, areas that are free of industrial fishing, pollution and shipping are almost completely confined to the polar regions.”

Such a large impact seems to be relegated to comparably few actors as well. Twenty nations hold control over 94 percent of the marine and terrestrial earth. Five nations — Russia, Canada, Australia, the U.S., and Brazil — control 70 percent.

If future generations are to remember us with gratitude rather than contempt … we must leave them a glimpse of the world as it was in the beginning. — Lyndon B. Johnson, 36th President of the United States 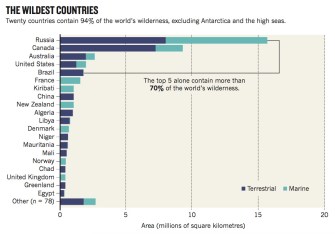 What action can be taken to protect global wilderness?

“We believe that Earth’s remaining wilderness can be protected only if its importance is recognized within international policy frameworks,” the paper states. The authors continue:

“How can changes in policy at the global level translate into effective national action? By our measure, 20 countries contain 94 percent of the world’s remaining wilderness (excluding the high seas and Antarctica). More than 70 percent is in just five countries — Russia, Canada, Australia, the United States and Brazil (see ‘What’s left?’). Thus, the steps these nations take (or fail to take) to limit the expansion of roads and shipping lanes, and to rein in large-scale developments in mining, forestry, agriculture, aquaculture and industrial fishing, will be critical.”

The paper recommends a move for large-scale ecosystems to be explicitly protected by an international framework similar to The Paris Climate Agreement.

Pressure could well be put on the five largest meat and dairy companies, who emit a startling amount of C02 and don’t receive nearly as much political attention as oil companies.

Quite relevant in this moment in America, just before the midterms: Vote for politicians and environmental issues that will make the world a better place.

The authors finish on an emotionally poignant note:

“As U.S. President Lyndon B. Johnson observed when he signed the US Wilderness Act in 1964, “If future generations are to remember us with gratitude rather than contempt. . . we must leave them a glimpse of the world as it was in the beginning.”

Already we have lost so much. We must grasp this opportunity to secure the wilderness before it disappears forever. Photo by Tony Reid on Unsplash

Once numbering just 27 birds, the global population of California condors is now in the hundreds.
Life

France is split in two by its very own “desert,” the Empty Diagonal. The area’s depopulation is fairly recent, and Paris is to blame.
Up Next
Life

Google and NatGeo team up to combat climate change

They’re creating an unprecedented map of Earth to help government leaders make better decisions in regard to climate change.