Who are the world’s top predators? It’s not humans, killer whales or tigers. The creatures that kill and consume the most amount of prey per year are lowly spiders. Such is the conclusion of illuminating research by a Swiss spider scientist.

There are an estimated 25 million tons of spiders in the world, which hunt and eat between 400 to 800 million tons of prey every year. Most of the prey would be insects, with some occasional frogs, lizards, fish and even bats. By comparison, in that same year humans would consume about 400 million tons of meat and fish, according to the Food and Agriculture Organization of the United Nations (FAO). Whales would chow down on about 280-500 million tons of seafood in the same time span.

If the 3200 or so tigers in the world eat up to 25 pounds of prey per day, it can be estimated that they eat about 13 thousand tons of prey annually. Tigers are also no match for spiders.

The lead author of the study, Dr. Martin Nyffeler from the University of Basel, has been studying spiders for 40 years and was inspired to make this calculation by “The World of Spiders,” a 1958 arachnology book which proposed that if you combine the weight of all insects killed each year by British spiders, the amount would be greater than the total weight of all the humans in Britain. 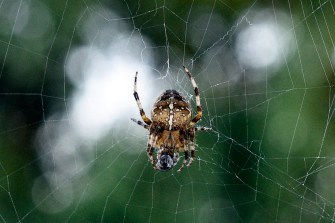 Spiders, in case you are wondering, are not insects. They are arachnids, creatures that have two body parts, eight legs, simple eyes, and no wings or antennae. Insects, on the other hand, have three body parts, six legs, compound eyes and most often two pairs of wings.

The new study really highlights how much 45,000 species of spiders in existence contribute ecologically.

“Our calculations let us quantify for the first time on a global scale that spiders are major natural enemies of insects. In concert with other insectivorous animals such as ants and birds, they help to reduce the population densities of insects significantly,” says Dr. Nyffeler. “Spiders thus make an essential contribution to maintaining the ecological balance of nature.”

And in case none of this convinces you and you still think spiders are kind of creepy, consider that on average they have a population density of 131 individual spiders per square meter on earth, but in “favorable” conditions it can be up to 1,000 individuals per square meter. They are mostly everywhere.

You can read the study here, in the Science of Nature.

Three cutting-edge techniques – the gene-editing tool CRISPR, fluorescent proteins and optogenetics – were all inspired by nature.
Up Next
Hard Science

The climate your ancestors came from shaped your nose