As far as we know, humans alone are capable of speech as we know it, with words and sentences. This has to do, scientists believe, with a pathway in the brain we possess. Now a new and controversial study reports the presence of this same pathway, albeit in less pronounced form, in macaques. Given that our last shared ancestor with these monkeys was 25-30 million years ago, the study suggests that speech may date back to at least that far, much longer ago than the previous estimates of five million years.

Pinpointing such evolutionary milestones is tricky, since brain tissues don’t survive as fossils, leaving us to examine the contemporary brains of our closest relatives, such as primates, to piece these puzzles together. The study’s lead author, comparative neuropsychologist Chris Petkov of Newcastle University in the UK compares the study of our living cousins is like finding a lost fossil. 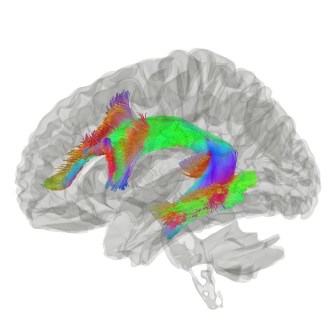 The arcuate fasciculus and the auditory cortex

The fuss is about a neural pathway in humans called the arcuate fasciculus, or AF, that traverses our prefrontal cortex and frontal lobe. Recent research suggests it has connections to other brain regions as well.

For the study, international teams of European and US scientists pored through new imaging data of humans looking for evidence of this pathway in other regions. They found a segment of it, unexpectedly, in the auditory complexes of both brain hemispheres, though most strongly identifiable in the left one. Says Petkov, “To be honest, we were really quite surprised that the auditory system has this privileged pathway to vocal production regions in frontal cortex.” He adds, “That in itself tells us that there is something special about this pathway. The link to projection from the auditory system to frontal cortex regions, which in humans supports language, is fascinating.” 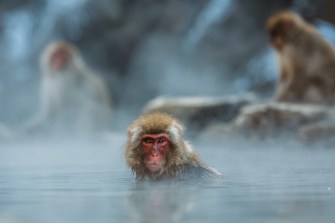 Things got even more interesting when Petkov and his colleagues began searching for the AF in apes and monkeys. In their auditory cortexes, too, the researchers saw what appeared to be something similar to, though less distinct than, the human AF. Their interpretation of the finding is that speech may have begun in the auditory cortex and in humans over time spread outward to encompass the prefrontal cortex and frontal lobe whose executive function allowed us to develop basic sound communication into sophisticated speech.

“Whether monkeys have a homolog (a precursor) of this pathway was highly controversial,” says Petkov. “Thinking further about the basis for the controversy, when we started the project we also wondered whether such a pathway in monkeys was missed because scientists had not looked in the correct place. We predicted that a missing correspondence to humans might be hiding, so to say, in the auditory system. So that is where we looked first. The analogy here is that we may have been looking in the wrong place for the missing brain ‘fossil.'” 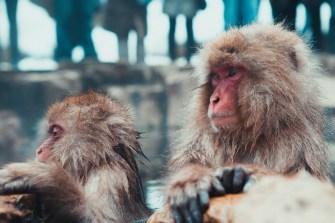 Do macaques talk, then?

Well, in a sense, yes. While we haven’t observed words and sentences in these Old World monkeys, they do communicate with vocal sounds and with gestures, signaling information about food and about imminent danger. Other research has identified what appears to be a speech-ready vocal tract.

Finding an AF-like pathway in macaques may not even represent their earliest development, notes Petkov, who points out, “there may be more brain ‘fossils’ yet to be discovered with even earlier evolutionary origins. Or it may be discovered that the origin of this pathway traces back even further if another brain “fossil” is found.”

Not everyone will be onboard with Petkov’s conclusions, which he admits are “highly controversial.” Still, if they turn out to be valid, even beyond the “wow” factor, who knows where further identification of AF-related pathways could lead, potentially including new ways to work around interruptions in brain circuitry that may affect patients with speech-based disorders.

Joint senior author neurologist Timothy Griffiths says, “This discovery has tremendous potential for understanding which aspects of human auditory cognition and language can be studied with animal models in ways not possible with humans and apes. The study has already inspired new research underway including with neurology patients.”

You open an app and start scrolling, then suddenly it’s an hour later. Sound familiar?
The Future

Uploading your mind is not a pathway to immortality. Instead, it will create a possibly hostile digital doppelgänger.
Neuropsych

The dark side of neuroplasticity

Long thought incapable of regenerating, we now know that brain cells can grow and reorganize. That, it turns out, is a mixed blessing.
Surprising Science

Your subjective experience might not end the moment your heart stops, research on near-death experiences suggests.
Neuropsych

What makes us subconsciously mimic the accents of others in conversation

When you imitate the speech of others, there’s a thin line between whether it’s a social asset or faux pas.
Up Next
Starts With A Bang

The Hubble Space Telescope, as imaged during its last and final servicing mission. Although it hasn’t been serviced in over a decade, Hubble continues to be humanity’s flagship ultraviolet, optical, […]