One of the hallmarks of life is homeostasis, or the ability for life to maintain a consistent internal state regardless of external conditions. Think of how you sweat to cool down, or how you need to drink water every now and again to maintain fluid levels.

This need to maintain homeostasis is present in all forms of life by definition. But in order for there to be homeostasis, there needs to be an inside and an outside. Now, a new study published in Nature Ecology & Evolution on November 4, may have identified how life first developed the barriers between cells’ insides and their outsides. 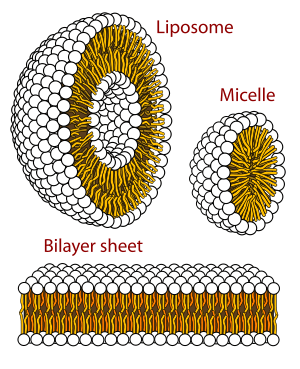 Examples of a lipid bilayer, a liposome (a.k.a., a vesicle, or a protocell), and a micelle, which is a type of structure composed of only one layer of lipids.

Biologists believe that before life could develop on Earth, the first thing that needed to occur was the development of protocells. You can think of this like a cell minus all of the machinery that makes a cell work. Instead, a protocell is just composed of a membrane that defines inside and outside.

Nearly every organism’s cell membrane is composed of a lipid bilayer, meaning that it’s likely that life started out with these bilayers. A lipid is what’s known as an amphiphilic molecules, which are molecules that have one side attracted to water and one side repelled by it. When there are two “sheets” of these molecules, they can form a barrier where the water-loving heads of the molecules face outward while the water-hating tails face inward. Sometimes, these sheets also form a sphere, or vesicle. These vesicles are essentially cell membranes.

Many scientists believe that the formation of vesicles was the first step toward life. Vesicles keep certain material out of the protocell while protecting an internal solution — homeostasis. But the question of where and how they formed is less clear.

An artists depiction of the water vapor plumes found on Enceladus, which are believed to caused by subsurface hydrothermal vents.

Could vesicles have formed around hydrothermal vents?

The earliest direct evidence of life dates back to 3.5 billion years ago in the form of fossilized microorganisms, but life clearly existed before then. A 2017 study claims to have identified fossilized microorganisms dating back to 4.28 billion years ago, a mere 400 million years after the formation of the Earth itself. But this finding is contested, not just because it implies life sprang into action as soon as it could but because of where it was found: in the precipitate of hydrothermal vents.

The interesting chemistry and energy source that characterized hydrothermal vents has long made them a candidate for the origin of life, but experiments have failed to demonstrate that vesicles can form there. The environment around hydrothermal vents in the Hadean/early Archaean period when life began was highly alkaline, or basic, and extremely salty, even saltier than today’s oceans are. When scientists attempted to create vesicles under such conditions, they simply fell apart, leading some scientists to argue that life probably began in freshwater pools, away from the highly alkaline and salty environment of hydrothermal vents.

However, this new study indicates that not only can protocells develop in this environment, it actually encourages their development. One of the study’s authors, Dr. Sean Jordan, explains why their results were different: “Other experiments had all used a small number of molecule types, mostly with fatty acids of the same size, whereas in natural environments, you would expect to see a wider array of molecules.”

Prior experiments were extremely precise, failing to replicate that messier nature of the hydrothermal vent environment — Jordan’s experiment, however, featured numerous amphiphilic molecules. In fact, molecules with longer carbon chains required the heat of a hydrothermal vent to form vesicles, the alkalinity helped the vesicles keep their electrical charge, and the salt in the solution ensured helped the molecules pack together more tightly.

Not only does this suggest that life on Earth may have started in the deep oceans by hydrothermal vents, it also points to places in our solar system where life may develop or have developed as well. Celestial objects such as Europa, one of Jupiter’s moons, may harbor life despite the miles-deep shell of ice that encases it. The moon’s orbit constantly squeezes and unsqueezes it, providing heat for a liquid subsurface ocean that observations suggest may be salty and alkaline as well. Saturn’s moon Enceladus is covered in geysers shooting water vapor, thought to be caused by hydrothermal vents, that contain salts and organic compounds.

Together, these facts paint a picture about the formation of life; not only might life first develop deep in the ocean near hydrothermal vents, but it might develop as soon as its able, and often. If this finding is backed up by further evidence, and if we find that life began nearly as soon as the oceans formed on Earth, we may have a very good shot at finding life in our solar system on the moons of Jupiter and Saturn.

Without Benjamin List and David MacMillan, chemists would still be using metals and enzymes to catalyze chemical reactions.
Starts With A Bang

From wearable electronics to microscopic sensors to telemedicine, new advances like graphene and supercapacitors are bringing "impossible" electronics to life.
Surprising Science

WT.Social promises never to sell your data or run advertisements.