Whenever a movie script calls for the protagonist to be menaced by a spider, central casting typically places a call to a tarantula wrangler. Tarantulas, or theraphosids, are hairy and big — they’re the largest spiders in the world — and for many people, the ultimate spider nightmare.

Reality is much tamer. Tarantulas are not actually aggressive. They’re homebodies, preferring to spend their time in their burrows with their families. Females and their young hardly ever leave home, and males only go out to mate. Stay away from them, and they’ll stay away from you.

This makes tarantulas’ presence on six out of seven continents something of a mystery. How did such non-adventurous creatures end up in so many places? A new study published in the journal PeerJ from a team of international researchers provides the answer: They walked there as they rafted across the earth atop drifting continental masses. 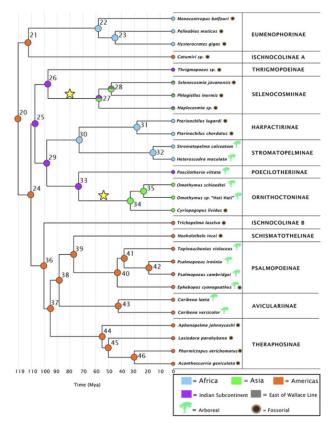 The lead author of the study is Carnegie Mellon University’s Saoirse Foley, whose team included researchers from Universität Trier in Germany and Yale-NUS College in Singapore. Together, they conducted a wide-ranging analysis of 48 spider transcriptomes, a compilation of RNA transcripts inside of cells. The researchers used the transcriptomes to construct a “family tree.”

The tarantula family tree was then time-calibrated using fossil data. (Tarantula fossils are rare, so the team used software to assist in the calculation using the ages of fossils from other types of spiders.)

Combined, the data allowed the researchers to construct a tarantula family tree dating back about 120 million years to the Cretaceous period. Around this time, giant crocodiles were walking — yes walking on legs — in South Korea.

Landmasses on the move 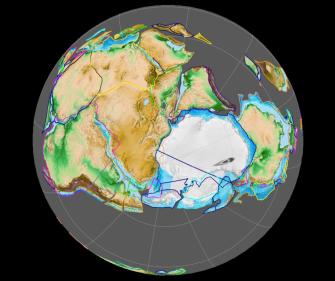 Tarantulas are Americans from a time when the Americas were part of the supercontinent Gondwana and still attached to Australia, Africa, Antarctica, and India.

The researchers tracked tarantulas’ migration atop pieces of Gondwana as the landmasses slowly assumed their current positions.

A few detours along the way 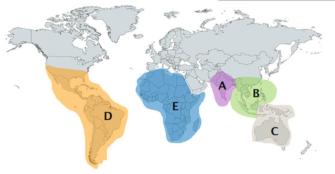 The research revealed that tarantula migration wasn’t just a matter of riding the continents.

Researchers discovered that the spiders may have done some dispersing through the areas in which they found themselves. Their arrival into Asia was, for example, two-pronged. Once the tarantulas were in India, they split into two groups — one group stayed on the ground while the other took to the trees — before that landmass collided with Asia and the spiders moved northward. The two groups arrived in Asia 20 million years apart from each other.

This is a bit of a surprise says Foley, noting that the two Indian variants demonstrate tarantula adaptability at work:

“Previously, we did not consider tarantulas to be good dispersers. While continental drift certainly played its part in their history, the two Asian colonization events encourage us to reconsider this narrative. The microhabitat differences between those two lineages also suggest that tarantulas are experts at exploiting ecological niches, while simultaneously displaying signs of niche conservation.”

Tags
ancient worldanimalsearth sciencegeneticsgeologyhistorytarantulas
In this article
ancient worldanimalsearth sciencegeneticsgeologyhistorytarantulas
Related
Strange Maps
The horrors of World War II air war, in one stark map
This graph shows how badly German cities were hit by Allied bombing raids.
Life
Strange life forms create an “alien” ecosystem in an abandoned uranium mine
Slimy biofilms made up of bacterial and eukaryotic life forms have taken over an abandoned, flooded uranium mine in Germany.
Hard Science
Earth has an eerie “sodium glow,” and astronomers use it to image stars
Air currents in our atmosphere limit the resolving power of giant telescopes, but computers and artificial stars can sharpen the blur.
High Culture
Why are flood myths so common in stories from ancient cultures around the world?
Could the prevalence of flood myths around the world tell us something about early human migration or even the way our brains work?
The Past
The Wild West was lawless and chaotic — and the police helped keep it that way
Lawmen and outlaws were often the same people.
Up Next
Strange Maps
How Europe will beat China on batteries
Map shows Europe’s imminent Great Leap Forward in battery cell production