Neil Irwin is a senior economic correspondent at The New York Times, where he was a founding member of The Upshot, the Times’s site for analytical journalism. He was previously[…]
Go to Profile 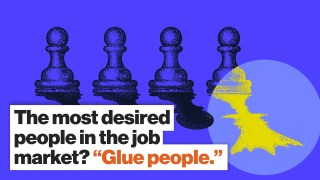 The most desired people in the job market? ‘Glue people.’

NEIL IRWIN: My job is to be an economics writer. So what I do everyday is write about these big-picture issues in the economy, what's changing in the corporate world, GDP, what's going on with the Federal Reserve. And then, at night, often, over the last several years, I'll go out and I'll see a friend, or see a colleague, or a source, and we'll talk about how hard it can be to navigate a career in the modern world, how you have to make a lot of decisions, there's not a nice linear path you can follow like our parents' generation did. And eventually I realized these conversations I was having at night over drinks and these things I was writing about during the day as a writer at The New York Times were actually two sides of the same coin, and that figuring out how to have a successful career is really about understanding how the economy is shifting, how you can be in position to take advantage of those shifts rather than being steamrolled by them.

For this book, I went to a lot of big companies -- to Goldman Sachs, to Microsoft, to GE, to Walmart, and asked, OK, what does it take to succeed in this environment we're in, this highly-technological, highly-competitive environment? And the thing I heard over and over is the importance of being able to work in teams and pull together teams; I call it being a glue person, a person who can make a team stick together and produce something more than the sum of its parts. And so that's not just about technical ability. You have to have technical ability, obviously. You have to be good at whatever the thing is your core job is. But you also need to understand how what you do fits together with what your other members of that team are. And if you can't communicate with others effectively who have very different kinds of skills and background than your own, you're really not going to be that glue person.

Economists talk of this concept of Pareto optimality, and they usually mean it in regards to an entire economy. So an economy is Pareto optimal if you can't make one person better off without making somebody else worse off, meaning it's the best of all possible worlds -- even if there's inequality; it doesn't mean necessarily that everybody's equally well off. It just means if you're going to make somebody else better off, somebody else is worse off. Now, that's not what I'm talking about with careers, but I think drawing that line is a really useful concept that can help us understand who becomes a good glue person, who actually helps modern organizations propel toward success. And that's being Pareto optimal, meaning you can't get better at one thing without getting worse at the other.

So if you think about a team that has people who are engineers on it and people who do kind of marketing and product work on it, a Pareto optimal engineer is somebody who is a really good engineer who is at least as good at marketing as they can be without being worse as an engineer. This exists in all types of organizations, and there are different spots on that curve to be at. There are people who are really good at one thing, and only a little bit good at that other thing. Then there's others who are kind of in the middle, and they know some engineering, they know some marketing, some product development. Those tend to be team leaders, people who pull together a product in a lot of different types of organizations. There's no right answer for where on that curve you should be, but if you're not on that curve, you're in trouble, and you need to find a way to get out toward that frontier and work on whichever of your skills are lacking. You take every opportunity you have in the course of a career, whether that's in college, grad school, early jobs, even into mid-career jobs, to stretch yourself in new ways that might not come naturally to you.

I think the most natural thing in the world is take whatever you're naturally good at and try and get better at it. If you're a kid and you're good at a certain sport, you're probably going to keep playing that sport because it's nice to be good at things. But what I'm finding is that, in the modern workplace, what you really have to do is find ways to stretch yourself into areas that don't come as naturally. So if you have a natural mind for numbers and statistics, maybe figuring out how to be a better communicator and public speaker is the key. If somebody comes up through engineering, maybe understanding what do these finance people actually do all day, how does marketing fit in to figure out what product I should be building and working on? The key is asking for different opportunities, whether it's a six-month assignment on another team, working for a different boss who has a different background, always seeking out those opportunities to stretch your own experience beyond where it exists now.