Researchers at UCLA have found Grim Reaper DNA in 5% of the population. But there is a bright side – lifestyle choices go a long way in overriding a shorter genetic life expectancy. 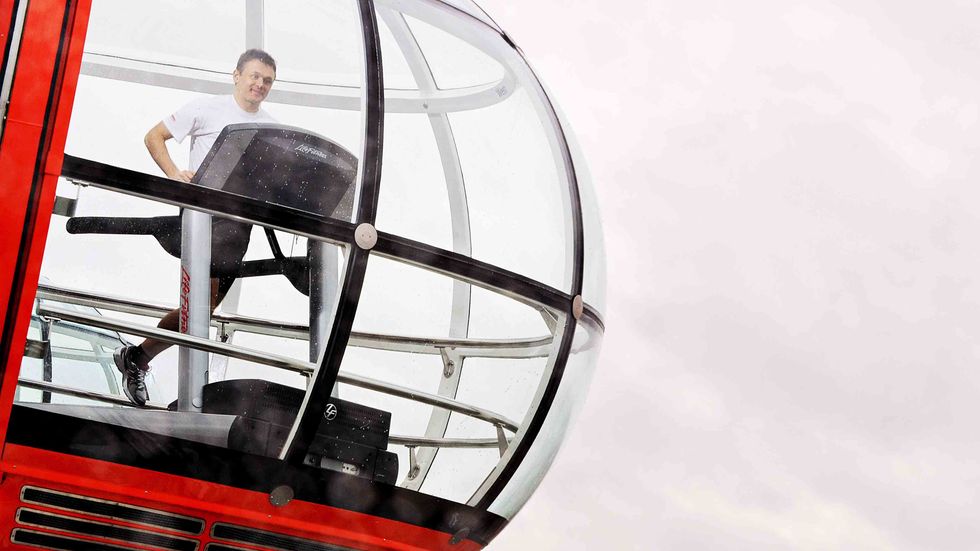 Veteran marathon runner Noel Bresland attempts to run a marathon on a treadmill inside a capsule of the famous London Eye in central London.

Those of you trying to ward off old age with macrobiotic diets and 5am running sessions? Chill. It might not be helping you. In fact, according to new research led by UCLA, you might very well die young anyway, thanks to your genes.

“You get people who are vegan, sleep 10 hours a day, have a low-stress job, and still end up dying young,” Steve Horvath, a biostatistician who led the research, told The Guardian. “Some people [just] have a faster innate aging rate.”

That faster innate aging rate is caused by “subtle chemical changes” in the blood, The Guardian reports. Your body may age more quickly than your chronological age indicates it should. The culprit, according to Horvath’s previous research, are methyl compounds that attach or detach from our genome over time. Those compounds are one of the four primary ones that make up our DNA. While their change doesn’t alter our underlying genomic pattern, it does age us. The Guardian explains that “methyl levels at 353 specific sites on the genome rise and fall according to a very specific pattern as we age – and that the pattern is consistent across the population. The latest study… showed that some people are propelled along life’s biological tramlines much quicker than others – regardless of lifestyle.”

The study involved 65 scientists in seven countries analyzing over 13,000 blood samples. UCLA explains what they did next: “Applying a variety of molecular methods, including an epigenetic clock developed by Horvath in 2013, the scientists measured the aging rates of each individual... By comparing chronological age to the blood’s biological age, the scientists used the clock to predict each person’s life expectancy.”

How exactly can an epigenetic clock do that? According to Duke University Professor Randy Jirtle, it’s because epigenetics are “computer programs established in our genes.” He broke down the process for us here: After applying that method to all those blood samples, Horvath and his team discovered that “5 percent of the population ages at a faster biological rate, resulting in a shorter life expectancy,” he explained in a UCLA statement. “Accelerated aging increases these adults’ risk of death by 50 percent at any age.”

More research needs to be done in order to clearly identify those risk factors, but one might be gender. UCLA reports that “even by the age of five the different speeds of aging between genders was apparent and by the age of 40 a biological age gap of 1-2 years opens up.” “Women always age a little bit more slowly than men,” Horvath added. “It’s not lifestyle it’s this innate aging process that favours [sic] women.”

All that said, there are more bright spots than concerns in this research. Horvath was quick to point out that, “for an individual, factors like blood pressure and smoking were more decisive” than genetics.

Another bright spot is that different parts of the body age faster than others. “Healthy breast tissue is about two to three years older than the rest of a woman's body," Horvath told UCLA back in 2013. "If a woman has breast cancer, the healthy tissue next to the tumor is an average of 12 years older than the rest of her body." That could explain why breast cancer is the most common cancer diagnosis in women.

The biggest bright spot may simply be that our epigenetic clock isn’t as persistent as Captain Hook’s -- meaning, it’s not constant. "It ticks much faster when we're born and growing from children into teenagers, then slows to a constant rate when we reach 20," Horvath explained. That means its effects won’t sneak up on you; they’ll accumulate over time, which gives you time to act on them.

Horvath has no plans to market his tests for general use, but we’ve still got a lot to learn from it. One thing we can be certain of is that exercising like fiends won’t keep any of us young forever. The best we can do is live healthy lifestyles to enjoy the years we do have.