Would Pirates Make Good Politicians? Iceland's About to Find Out

When the rest of the world chooses nationalism, Iceland chooses radical change. 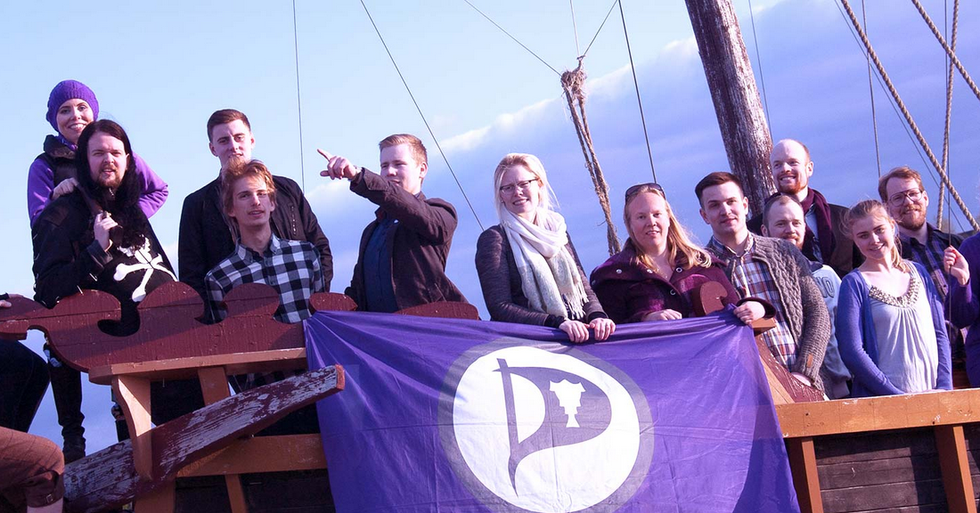 When the rest of the world swings right, Iceland chooses left.

“At a time when millions around the world are looking to populist politicians for solutions to their problems, many Icelandic voters have rallied around a radical, technology-focused left-wing party that champions political transparency, free health care and new measures to protect digital privacy.”

That quote comes from the BBC, and it’s about Iceland’s Pirate Party. The Pirate Party was founded in 2012 by a handful of internet activists. Their goal? To “Restart Iceland” by prioritizing “transparency in governance and the protection and promotion of civil rights” in Iceland’s government, as their site explains. They welcome anyone who wants to help and give potential allies two ways to do that on the front page of their site: “Strengthen” and “Participate.”

The Pirate Party was dismissed by critics as activists with no understanding of government. But they came in third in an October election, earning 10 out of 63 seats in Iceland’s Parliament, and “will continue talks with [the] four other parties represented in parliament, the Left-Greens, Social Democrats, Bright Future and the Reform Party,” according to Reuters.

That means the Pirate Party has a real shot at changing Iceland’s government. Their first steps fall to party leader Birgitta Jonsdottir because after the October election “Iceland’s president asked Jonsdottir to [help] form a new coalition government,” BBC reports. A self-described “anarchist poetician,” Jonsdottir takes that new responsibility seriously: “A lot of marginalized people, people that nobody really cares about, people that feel left behind because the system is not working for them, have actually started to engage and work with us,” she told BBC. Why Iceland’s disenfranchised voted for pirates to government rather than right-wing nationalists like the UK, the US, and Austria is unclear -- but having an option like the pirate party in a country whose government has more than two political parties doing the work could be key.

Leader of the Pirate Party of Iceland Birgitta Jonsdottir, poses for a picture at the party's office in the Icelandic Parliament in Reykjavik, Iceland. Credit: Gwladys Fouche/REUTERS

One thing Jonsdottir and the Pirate Party are working on is giving Iceland’s citizens power to “introduce their own policies to be voted on, as long as they arrange at least one meeting to discuss it,” BBC reports. The party “has also produced a new draft constitution for Iceland incorporating ideas crowdsourced from the population. “To be the robin hood of power, we take the power from the powerful and give it to the people,” Jonsdottir told the BBC.

Another issue the Pirate Party wants to resolve is the lack of security for online information. Where traditional politicians downplay or ignore the safety of our digital data, Jonsdottir is dire: “she is fully aware that technology cannot be rolled back – and that people seem to be very willing to give up their personal data,” the BBC reports. “I totally declare that privacy is dead and gone forever and we will never be able to reclaim it,” she says. “We have to start to look at our realities from that perspective.”

Jonsdottir is right in asserting that “privacy is dead and gone forever.” Here’s why, according to the FBI’s former Futurist-in-Residence, Mark Goodman: Other items on the Pirate Party’s agenda include embracing Bitcoin as a currency and offering asylum to Edward Snowden. And they’re open to public suggestions for more. “The Icelandic Pirate Party’s adoption of a policy hinges on the ability to root it firmly in the core policies of the party,” they explain on their site. “It must also receive sufficient support in the Pirate Party’s online voting system.” The party does much of its work online, holding policy discussions and constitutional conventions in “in-house meetings, social media and various online groups,” according to the site. Consider it crowdsourcing for government.

This amount of transparency between a political party and the people it’s governing is radically refreshing. But there are potential hiccups to its abilities. “Jonsdottir’s opponents claim her party are political lightweights, arguing that a party formed from a grab-bag of anarchists chasing ideals are not up to tackling problems like rising house prices, student debt and climate change,” BBC reports. Highlighting lack of a experience as the major critique of a new political party is a bit like kicking a horse when it’s down. Yet the Pirate Party is responding to this critique with its biggest asset: its people. “What others call passing the buck, Jonsdottir sees as the best way to represent a diverse population. “Somebody needs to set new standards,” she told the BBC. Setting new standards while a country’s future is uncertain is brave. And both Jonsdottir and the Pirate Party are determined to make it work.

Jonsdottir’s perspective is a hard one for Americans to empathize with. In the wake of a bitter, divisive election where our President-elect will be a man who earned 2.6 million less votes than his competitor, half the country is so pissed off it wants to abolish the electoral college. Yet rebuilding institutions the way Iceland is may be the best way to create a functional government, as Dan Ariely told us here: