What Made David Bowie So Creative? His Obsession with Art.

Sotheby’s will auction off 380 pieces from Bowie’s collection later this year. The collection is “eclectic, unscripted, [and] understated,” according to Sotheby’s European chairman Oliver Barker. 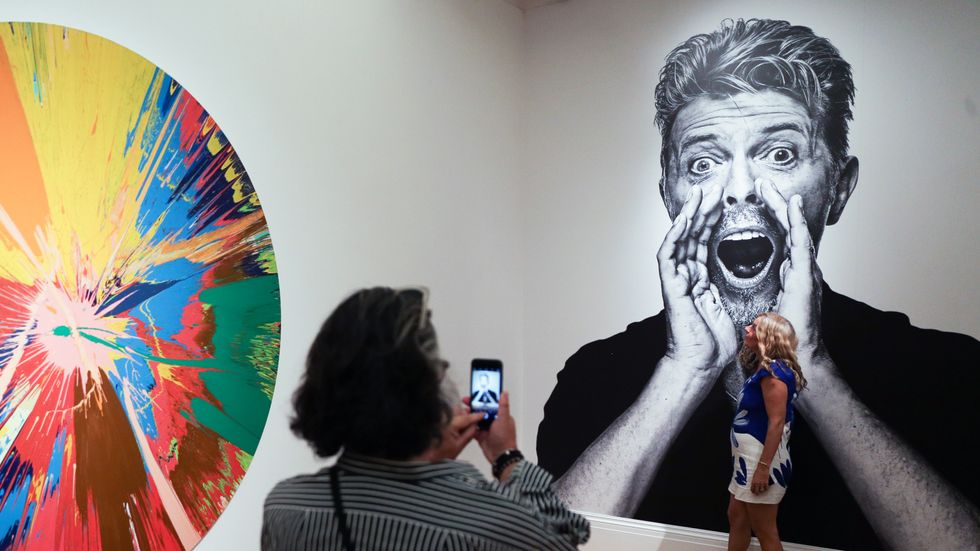 Visitors take a picture in front of a pictures of the British singer David Bowie and beside by one of the artworks (L) he owned named 'BEAUTIFUL, SHATTERING, SLASHING, VIOLENT, PINKY, HACKING, SPHINCTER PAINTING' by British artist Damien Hirst. (DANIEL LE

David Bowie was a singer, songwriter, musician, actor, painter, publisher, curator, editor, and art collector -- but above all, he was an artist. He died in January 2016, at the age of 69, leaving a powerful, divergent body of work as his legacy. Bowie blended artistic influences from mime and early American rock and roll, to modern art and jungle music in ways that shook, challenged, and changed popular music. Bowie thought of himself as a synthesizer, bringing out the best of whatever he liked, including fellow collaborators Moby, Trent Reznor, Adrian Belew, Peter Frampton, John Lennon, and Iggy Pop. How all those passions came together to create one of the most forceful artistic talents in recent memory is a mystery. Thankfully, the auction of his private art collection offers insights as to why.

In late 2016, Sotheby’s auctioned off 380 pieces from Bowie’s collection. None of these pieces had ever been seen by the public before. The collection is “eclectic, unscripted, [and] understated,” according to Sotheby’s European chairman Oliver Barker. It is particularly full of 20th-century British art, but there are also surreal, expressionistic and even outsider and African pieces. Three are valued at over $13.3 million. The most expensive is Jean-Michel Basquiat’s Air Power, valued between $3,320,000 - 4,648,000:

I feel the very moment of his brush or crayon touching the canvas. There is a burning immediacy to his ever evaporating decisions that fires the imagination ten or fifteen years on, as freshly molten as the day they were poured onto the canvas. It comes as no surprise to learn that he had a not-so-hidden ambition to be a rock musician... His work relates to rock in ways that very few other visual artists get near.

Basquiat was mentored by Andy Warhol, even collaborating with him on a few pieces. Bowie was deeply influenced by Warhol, writing a song about him and admiring the art rock experimentalism of his group The Velvet Underground. “I bought the whole pop art thing,” Bowie told the BBC, “[Warhol] wasn’t a real person, he was a creation.” That idea, combined with the raunchy lyrics of the Underground’s lead singer Lou Reed, inspired Bowie to create Ziggy Stardust, his most famous persona.

Another painter Bowie was deeply influenced by was Frank Auerbach. “I find his kind of bas relief way of painting extraordinary,” Bowie explained in a 1988 New York Times interview. “Sometimes I’m not really sure if I’m dealing with sculpture or painting.” He loved Auerbach’s work so much that he purchased Head of Gerda Boehm, which will be sold at the auction:

“My God, yeah! I want to sound like that looks,” Bowie continues in the Times interview. “It will give spiritual weight to my angst. Some mornings I’ll look at it and go, ‘Oh, God, yeah! I know!’ But that same painting, on a different day, can produce in me an incredible feeling of the triumph of trying to express myself as an artist.”

All of the pieces in the collection are risky in their own ways. “From a very early age I was always fascinated by those who transgressed the norm, who defied convention, whether in painting or in music or anything,” he said in an 1992 Life interview. “Those were my heroes.” He put it more succinctly for Joe Smith in a 1987 Off the Record interview: “I love to see people being dangerous.”

Here are some of the other pieces in Bowie’s collection:

Hirst was one of the few high-profile artists Bowie expressed public admiration for, going so far as to interview Hirst for Modern Paintings. Bowie recounted the experience in his Times interview: “He’s different. I think his work is extremely emotional, subjective, very tied up with his own personal fears – his fear of death is very strong – and I find his pieces moving and not at all flippant.” Bowie even collaborated with Hirst on Beautiful Hallo Space-boy Painting.

Basquiat, Auerbach, and Hirst are far from the only painters Bowie turned to for inspiration over his career. The cover of his 1977 album 'Heroes' was inspired by the painting Roquairol by German painter Erich Heckel. The cover of his 1984 album Tonight borrowed the aesthetic style of British artists Gilbert & George. The cover of his 1979 album Lodger was an homage to Roman Polanski’s film The Tenant and was photographed by artist Derek Boshier, who also designed stage sets for Bowie. Bowie even designed the look of his lavish 1974 Diamond Dogs tour on the work of German artist George Grosz.

Bowie even borrowed techniques from other artists to troubleshoot songwriting problems. He borrowed author William Burroughs’ surrealist “cut up” method of physically cutting and rearranging text to write songs. He painted to work out musical problems, as he admitted in a Charlie Rose interview (“I used to work through musical problems by painting them out”). Sometimes he even scrawled sheet music on the carpet, as he did during a Dick Cavett interview (“What are you drawing?” / “(laughing) Attention… Sheet music. I have to get it out of my head”).

That desire to create must have driven Bowie’s desire to collect. He admitted as much in his Times interview:

Art was, seriously, the only thing I’d ever wanted to own. It has always been for me a stable nourishment. I use it. It can change the way I feel in the mornings. The same work can change me in different ways, depending on what I’m going through.

“The only thing I buy addictively is art,” he later confessed. You can view his entire addictive collection on Sotheby's website. It will be on public display at London’s New Bond Street galleries from November 1-10.

The proceeds from the auction have gone directly to Bowie’s family, who sold the collection because they don’t have the space to keep it all. A spokesman for his estate told Sotheby’s:

David’s art collection was fuelled by personal interest and compiled out of passion. He always sought and encouraged loans from the collection and enjoyed sharing the works in his custody. Though his family are keeping certain pieces of particular personal significance, it is now time to give others the opportunity to appreciate – and acquire – the art and objects he so admired.

Hopefully, the same collection that inspired Bowie will inspire others. If you feel like you need a bigger nudge of creative inspiration from him, he divulged his biggest secret to director Michael Apted in his 1997 documentary Inspirations: