Art of the Bill: How America Can Make Space Great Again 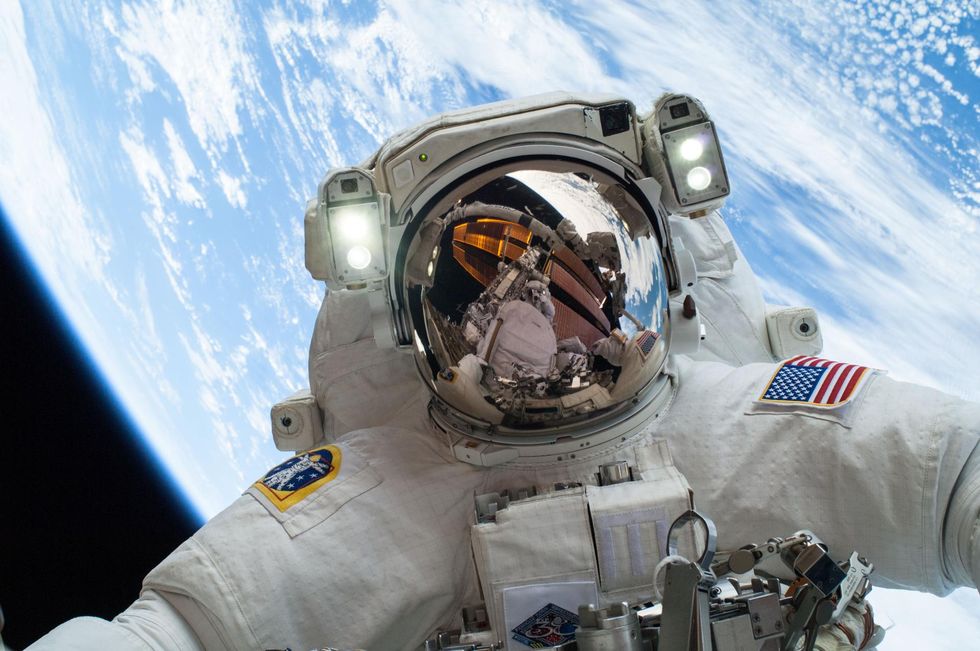 NASA astronaut Mike Hopkins, Expedition 38 flight engineer, participates in the second of two spacewalks, spread over a four-day period, which were designed to allow the crew to change out a faulty water pump on the exterior of the Earth orbiting Internat

In the wake of Trump’s plans to defund NASA’s Earth Science division and refocus space tech on exploration, the future of America’s investment in space is uncertain. Thankfully, the Air Force’s “Space Horizons” team has a plan to make the most of our space program. The main members are US Air Force Lt. Col. Peter Garretson, Maj. Brent Ziarnick, Ph.D., Dr. M.V. “Coyote” Smith, Col., USAF (Ret), and Dr. Everett Dolman. Here are the highlights on how they plan to make space great again.

How humans will live on Mars, according to a conceptual artist. Credit: NASA

“All civilizations become either space-faring or extinct,” according to Carl Sagan. Stephen Petranek agrees, telling us “the reason we need to travel to Mars and to establish a civilization on Mars is to protect the long-term survival of the human species.” Elon Musk agrees, too, which is why he’s pushing to build a human society on Mars in 40 years. The Space Horizons team agrees with all of them, writing that the US needs to establish a “permanent self-sustaining human settlement in order for humankind to become a multi-habitat, multi-planetary, and eventually a starfaring species.” Why? “To spread life and the unique life of Earth’s biospheres to the myriad of lifeless worlds,” and “to enable a thriving economy which may one day support millions of American and other citizens in permanent space settlements.” Investing in spacefaring technology creates economic opportunities and even pave the way for new industries -- such as:

The Next Industrial Revolution Will Be In Space

“Living and working on the moon will provide opportunities for research and technology development that will prepare humans for further human exploration to Mars and beyond,” as NASA explains. That’s why they’re hoping to go back. The Space Horizons team agrees, saying “The United States shall support pre-competitive research and development of technology to mine the Moon, asteroids and other bodies for metals, propellant, and other minerals with a clear intention to transition these technologies to private industry.” They also advocate for developing “pre-competitive technology necessary for on-orbit manufacture, construction, and servicing of large, high power platforms and settlements.”

That plan may sound crazy, but it’s based in fact: “The promise of near-infinite mineral resources in space promises to alleviate long-term concerns over our planet's resource scarcity,” as we’ve told you before. Plus, the team wants to use space to invest in alternative energy with “the creation of a space-power grid to supply nearly limitless green energy to every nation,” according to the report. Win-win.

Space Weapons are the Best Weapons

An example of current missile defense technology being developed by the US Air Force. Credit: Raytheon / Airforce Technology

The Space Horizons team wants to develop space weapons that seek to:

The idea of a missile defense system in space began under President Ronald Reagan. Nicknamed “Star Wars,” the Strategic Defense Initiative was a plan to create “a sophisticated anti-ballistic missile system [that would] prevent missile attacks from other countries, specifically the Soviet Union,” reports the Cold War Museum. Its goal was to “strengthen the stability and credibility of deterrence and reduce the threat of nuclear war,” according to the official White House memo. But, according to VICE, the multibillion dollar program is “bloated and mostly useless” because it “aims to “hit bullets with bullets”—and often misses.” It was still funded under President Obama, and is likely to be funded under President Trump. But since it’s never worked, it’s unclear why the Space Horizons team advocates investing in it.

Space Will Bring the World’s Best and Brightest to America

“It is the policy of the United States to compete for the best space-related talent and industries to come to the United States,” the Space Horizons team writes. In order to do that, they want to “initiate a new series of space-related educational grants to grow our ranks of space-capable science, technology, engineering and math professionals.” They want to do that by investing in STEM (science, technology, engineering, math) education programs for global students, which is exactly what the Department of Education had been trying to do under Obama’s term. The issue with doing that under President Trump is that his immigration policies will greatly restrict the kinds of people coming into the country. His rhetoric has also greatly emboldened anti-immigrant sentiment, making the idea of bringing the kinds of multinational talent needed for this plan unlikely.

Here’s the whole thing in an infographic:

These statements from the Space Horizons team are bold and lofty. Despite the two major drawbacks, a more thorough breakdown of the implementation of these plans might actually refocus resources in a way that helps America’s space program flourish under the incoming administration. Until then, read the whole treatise on Space Review.