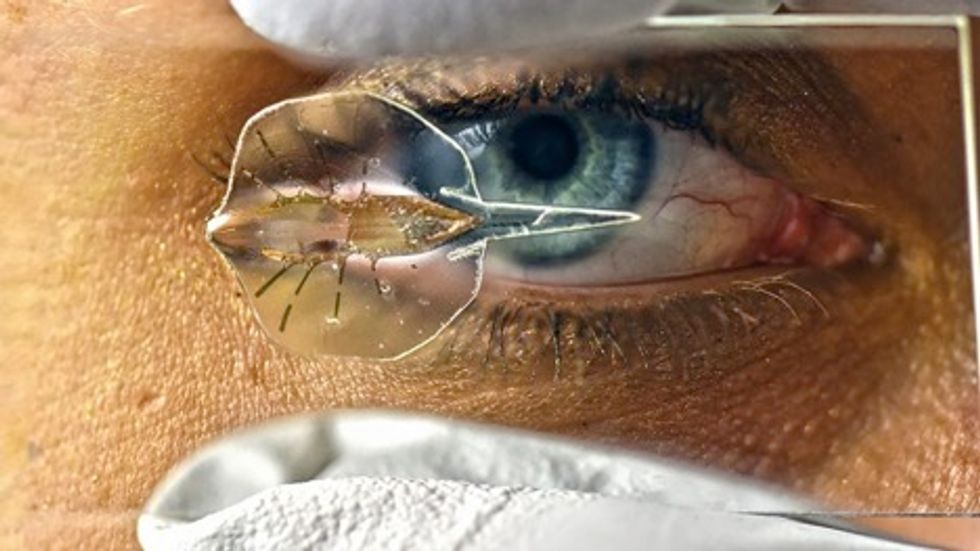 A research assistant displays a tissue-engineered robot stingray on a piece of glass. (Karaghen Hudson and Michael Rosnach/Science)

Parker isn’t a roboticist. He’s a veteran who’s served three tours in Afghanistan with the United States Army Reserve. Parker has a lifelong passion for both science and service and pursues both career simultaneously, leading a research team at Harvard University's Disease Biophysics Group while continuing to stay in the reserve. That combination of passions gives Parker an edge in out-of-the-box thinking -- which is exactly what happened when he went to the aquarium with his daughter and saw a stingray.

"I had this whole idea of a laser-guided, tissue-engineered stingray made out of rat," Parker told Phys.org. As he described the idea to mechanical engineer Sung-Jin Park, he had a less than enthusiastic response. "He looked at me like a hog staring at a wristwatch,” Parker continued. “He was like, 'Have I trusted my career to this yahoo'? I think he thought I was unglued."

Yet they did it. It took four years, but they built a translucent stingray with a gold skeleton and silicone fins layered with the heart muscle cells of a rat. It was a huge effort, and the team needed to pull in experts from non-related fields in order to do it, including an ichthyologist. "The cutting edge of a field is often putting two fields together—things that don't belong,” Parker told Fast Company.

The stingray robot swims in a tank of water at Harvard University. (AP Photo/Steven Senne)

Here’s how the stingray works, according to Phys.org:

"It's remote-controlled, guided by a blinking blue flashlight. Each burst of blue sets off a cascade of signals through the cells, which have been genetically-engineered to respond to light. The contraction of the tissue creates a downward motion on the ray's body. When the tissue relaxes, the gold skeleton recoils—moving the fin upward again in an undulating cycle that mimics the graceful swimming of a real ray or skate."

Parker launched the project in order to better understand the muscular pumping of a heart and used that knowledge toward the far-off goal of building an artificial one. He hopes that this stingray is one step toward creating other living machines that can do dangerous jobs in place of humans.

"Bio-hybrid machines—things with synthetic parts and living materials—they're going to happen," Parker told phys.org. "I've spent time getting shot at and seen people getting shot. If I could build a cyborg so my buddy doesn't have to crawl into that ditch to look for an IED, I'd do that in a heartbeat."

The team’s research is published in the journal Science.