The James Webb Space Telescope will bring us closer to a galaxy far, far away

The James Webb Space Telescope could mean finding a human-sustaining planet in another galaxy. 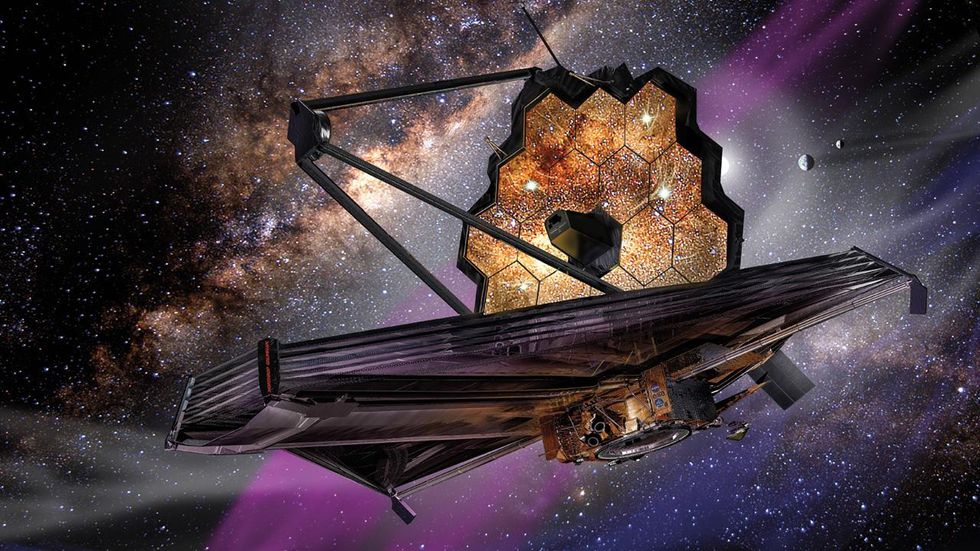 The NASA James Webb telescope could prove to be the biggest leap forward to humankind's exploration into deep space.

The Webb telescope will give us the ability to investigate the cosmos, unlocking secrets from the beginning of the Big Bang to how galaxies are formed and beyond, bringing us light years ahead of our current understanding of planetary evolution.

What Is the James Webb Telescope?

The James Webb Telescope is the newest introduction to NASA’s deep space exploration. NASA uses infrared wavelengths to measure objects very, very far away, and from those measurements, we learn about how planets are formed in different atmospheres, how galaxies are formed, and more.

The telescope is called Webb or JWST, and has a 6.5-meter mirror as its primary measurement tool. That mirror is made up of 18 separate pieces, that unfold and slide into place once it’s launched. The material of the mirrors, beryllium, is lighter than aluminum but stronger than steel, which will help it to survive out in deep space.

The James Webb Telescope also features a five-layer sunshield, about the size of a tennis court, that reduces the amplitude of the Sun’s heat. It also features many instruments, like cameras and spectrometers, that will enable it to detect and record event the faintest of signals. For a real-life comparison, think of it like this: JWST will be able to see a penny from about 24 miles away!

JWST will be able to study the formation of solar systems, and potentially even galaxies and planets capable of supporting human life.

The Hubble Telescope was the predecessor to JWST. Due to the scientific breakthroughs from Hubble, scientists were encouraged to push deeper into space and learn more but needed more advanced technology to do so. Hence, the James Webb Space Telescope was born.

The Hubble telescope measures and gauges space entities via visible (or optical) and ultraviolet wavelengths. Hubble orbits about 340 miles from Earth and was launched into space in 1990.

JWST will observe deep space primarily in infrared. This means that it will be able to measure objects that are more distant, redshifted, and are further from the visible range of observation than Hubble.

JWST will be about 1.5 million kilometers from Earth, at the second Lagrange point. (Lagrange points are gravitationally stable locations in space.) Don’t see JWST as a replacement to Hubble, however - they will work in tandem to explore further into space than ever before.

What The James Webb Telescope Means For Space Exploration

Once the James Webb Space Telescope is launched, it will be the largest observatory into space that has ever been conducted.

The telescope, which will operate at ultracool temperatures, will be able to detect infrared from the earliest stars and galaxies in the universe and analyze distant planets.

Unfortunately, the project has been beset by delays, from assembly to testing to defects in the shield. Originally set to launch in 2018, the project was pushed to 2019, and now has been delayed again to “no earlier than May 2020.”

"Webb will journey to an orbit about a million miles from the Earth — four times further than the moon," Thomas Zurbuchen said at a NASA news conference. Zurbuchen is the associate administrator of the Science Mission Directorate at NASA. "Simply put, we have one shot to get this right before going into space. You've heard this before, and it rings true for Webb: For us, really, failure is not an option ... It needs even closer attention now as it nears the finish line.""This is the largest international space science project in U.S. history, and we need to take the time necessary to evaluate its data very closely to ensure that we get back on track and get it right on the ground," Zurbuchen added. "We want to make sure that the launch is in 2020, and we have a path forward."

While engineers are working on fixes to hardware issues, NASA is working on implementing more oversight of the project with the contractor supporting the mission - Northrop Grumman.

Moving forward, the Webb telescope will be able to monitor the weather and atmosphere of objects previously out of observation range. With the ability to search for signs of life, water, and atmospheric pressure, the possibility that JWST could find an Earth-like replacement is more like a probability.