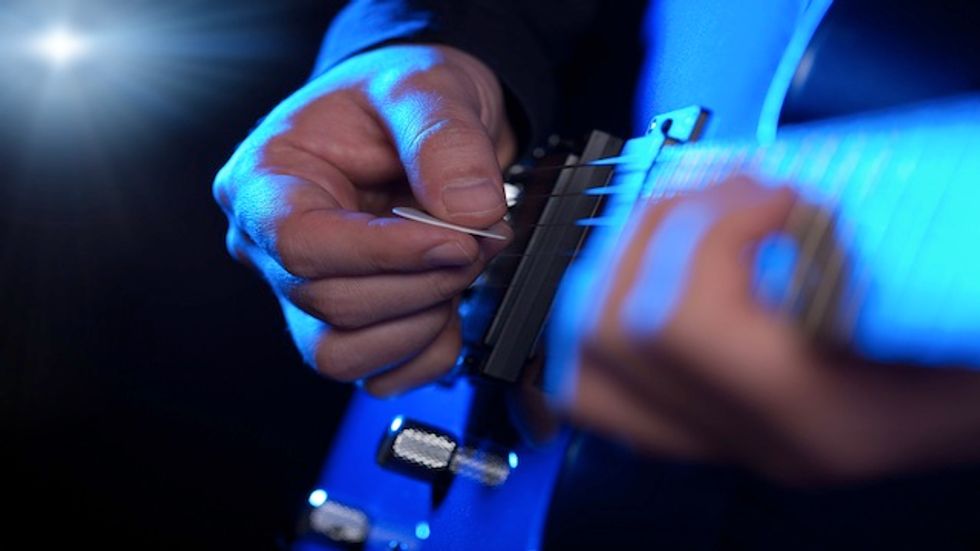 The following is a forthcoming article for CreativityPost.com

When Radiohead sat down to record the follow-up to their 1995 album, The Bends, lead singer Thom Yorke said he wanted to create a record with, “an atmosphere that’s perhaps a bit shocking when you first hear it.” So the band traded in the guitar-driven sound of The Bends for more diverse instrumentation, “including electric piano, Mellotron, cello and other string, glockenspiel, and electronic effects and rhythm.” In addition, Yorke replaced the introspective and soul-searching lyrics that defined The Bends with a more positive tone. The result was an unconventional sound that, in the eyes of the record company, was unmarketable. Regardless of these initial concerns, OK Computer was released in June 1997 and went on to sell millions of copies, receiving near universal critical acclaim and launching Radiohead into international fame.

What’s remarkable about OK Computer is how different it is from The Bends. By any account, The Bends was a commercial and artistic success. It reached number four in the UK Album Chart and went triple platinum in the UK and Canada as well as platinum in the US and the EU. It also landed on numerous end-of-year lists and was ranked 111 on Rolling Stone’s 500 greatest albums of all time. Despite its success Radiohead chose to completely change their sound. Why?

Radiohead has never been fully satisfied with their direction. However, this musical malaise drives them to craft novel songs that challenge the listener. Fans of the band know that this is precisely what makes them great. Each album is an innovation, not an imitation. Whereas ten years of Nickelback singles sound identical, the difference between “Fake Plastic Trees” and “Paranoid Android” is far-reaching.

Radiohead, of course, isn’t the only band compelled to constantly reinvent its sound. Nor is Thom Yorke the only musician who despises the musical status quo; Igor Stravinsky, Bob Dylan, and others also come to mind. What unites these creative geniuses is their yearning to replace the expected with the unexpected. As Yorke would say, they want to shock the audience.

When viewed from an evolutionary perspective, musical innovation appears odd. It’s obvious why we are motivated to eat, drink and reproduce; the origins of our desire to push musical boundaries, on the other hand, are less clear, especially considering that spending a lifetime crafting songs doesn’t appear to serve any adaptive advantages whatsoever.

In trying to understand why people like Thom Yorke are intrinsically motivated to innovate their craft, it helps to understand why humans enjoy music in the first place. One line of reasoning, which many cognitive scientists endorse, is that our appreciation for music, as well as our ability to create it, is a byproduct of evolution. That is, music is the product of several cognitive mechanisms that are functional outside of their intended purpose. Steven Pinker, for instance, famously called music ‘auditory cheesecake’ to suggest that music stimulates our auditory system in the same way that delicious food stimulates our taste buds.

If music is about auditory pleasure (as a result of a byproduct or otherwise) then good bands write songs that “[stimulate] our senses in novel ways.” Pop music does this especially well. Regardless of your music preference, the catchiness of the latest Rihanna or Lady Gaga single is undeniable. However, Rihanna and Gaga songs illustrate that the pleasure we receive from pop music is usually fleeting. Although pop songs are initially more pleasurable as a function of exposure, they eventually reach a peak and we enjoy them less and less thereafter. In fact, after enough further exposures they can even be annoying - no one has ever rejoiced in having a song stuck in their head. Anyone who listens to music understands this from experience and knows that this pattern is certainly not limited to western pop music.

Great bands and musicians that have transcended time and sustained interest over long periods of time follow a different trajectory. Classics such as “The Rite of Spring” and “Like a Rolling Stone” were bemoaned at first because they were exceedingly novel and complex. Whereas pop singles share many similar components (i.e., length, bpm, time signature and placement of choruses and verses), the work of Dylan, Stravinsky and other musical geniuses typically goes against musical norms by introducing new and more complex sounds. With enough exposure, though, listeners adjust and eventually appreciate the novelty. This is why classic aren’t fleeting: innovative instrumentation and complex sounds give us something different with each listen. That is, we don’t get sick of  “Paranoid Android” because there is something new with every listen; it takes many repeats for overabundance to downgrade its value.

The implication is that great bands and musicians are masters at reverse engineering our cognitive capacities for music in the same way bakers are masters at reverse engineering our taste buds. In both cases, they are taking advantage of what the brain finds pleasurable. Like a good chef, Radiohead’s eminence might be a result of their superior taste. What’s novel to us is stale to them.

The evolutionary mechanics behind Radiohead’s musical aspirations are not completely understood, of course, and we might never fully understand why some musicians and bands spend their entire lives creating music. But it appears that a byproduct of our auditory system (in addition to other distinct cognitive processes) gives us a craving to seek out and create novel sounds. The members of Radiohead likely feed off of this evolutionary quark in a way that motivates them to innovate their music for the better.

• A special thanks to Mark Changizi for helping me out with this post. Check out this paper of his, which informed some of my ideas here.