Modern Art Is Indebted To Descartes 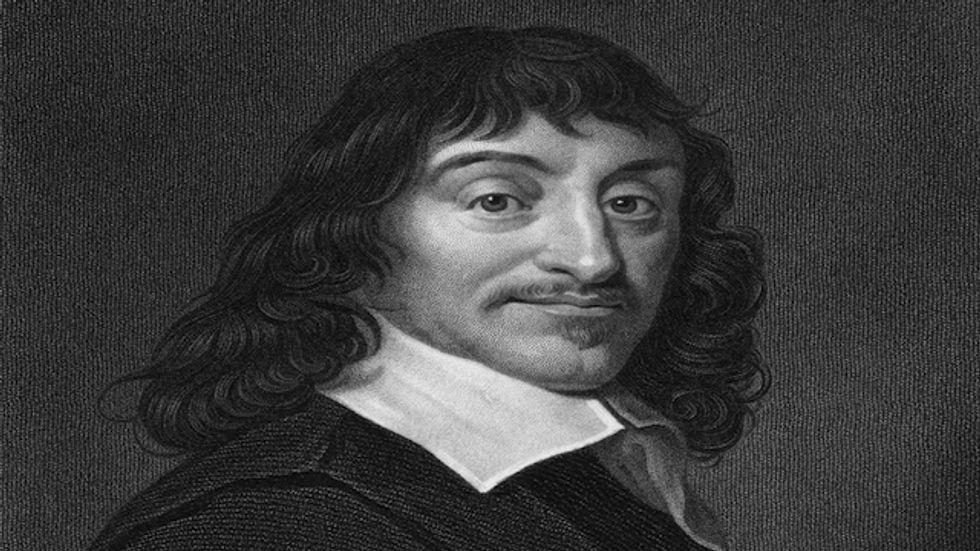 Writers and historians enjoy making the case for one or another thinker as the starting point for an epoch. Did Galileo launch the scientific revolution? Or was it Copernicus? Or Kepler? Did Dante’s poetry kick start the Renaissance? Or was it Poggio Bracciolini’s translation of Lucretius’ On the Nature of Things? The idea that one person or idea changed the course of history is alluring but usually illusionary. Alas, when we look in the rear view mirror, it’s difficult not to see the past as following a series of logical steps, one after another, up to the present.

Rene Descartes’ role as the forefather of modern philosophy is not an exception to this bias. But that is not necessarily a bad thing. He is considered the father of modern philosophy for a number of valid reasons. He valued reason and skepticism (even though he was deeply pious), and by writing Discourse on the Method in the first person, he shifted the focus from God to the individual. Unlike most philosophical texts, Descartes tome is readable; you feel like you’re with him along the way, as he doubts his way to certainty.

Perhaps this was the most important part. Through critical introspection, Descartes spawned the notion of the inner self – the idea that each of us possesses a unique core distinct from objects in the world and that self-knowledge is gained through self-scrutiny. This sounds obvious to us moderns, but it was not back then. There was no need to self-consult because God explained everything.

There’s no doubt these ideas played a pivotal role in the history of philosophy. Slightly overlooked is how Descartes - his speculations and his style - influenced modern art.

Consider contemporary film. When Descartes turned inward and noted that we have the unique ability to think about thinking, he triggered a number of metaphysical brainteasers: Are we living in a simulation? Is what we call “reality” a dream world? Years later, these questions became the basis for The Matrix and Inception.

The 1982 thriller Blade Runner also comes to mind. Rick Deckard (Harrison Ford) is a bounty hunter tasked with “retiring” six escaped androids in a post-apocalyptical Earth (or is he an android?). The Sixth Sense and Fight Club lure you down a path of expectations, building up tension along the way, until the very end an unexpected twist forces a reinterpretation. In the case of these films, that means asking the questions “Who is real?” and “What is identity?

The Truman Show tells the story of Truman Burback (Jim Carrey), who has unknowingly lived in front of cameras his whole life. Could we be living in such a world? These questions kept Descartes up at night.

Cartesian skepticism also shows itself in visual art of the last 150 years, where challenging the status quo to capture a more fundamental truth is a salient theme. Think about the Impressionists rebelling against the Salon, the Post-Impressionists challenging the Impressionists, and so on until people like Jackson Pollock started questioning art itself. The history of visual art, in a sense, parallels the reductionism of Discourse. Both Descartes and modern painters started by calling everything into doubt.

The first person narrative of Discourse is felt in literature. Mrs. Dalloway is famed for its stream of consciousness storytelling, in which the reader exists inside the mind of Clarissa Dalloway for most of Woolf’s masterpiece. James Joyce’s Ulysses, perhaps the hallmark of modern literature, is similar. Both reach widely different conclusions about meaning and existence, yet they are indebted to Descartes’ style.

And then there’s the estranged 19th century French surrealist writer Alfred Jarry. He developed ‘pataphysics (the apostrophe is intentional), or the study of what lies beyond the realm of metaphysics. If ‘pataphysics sounds like the product of a drug induced dorm room bull session, that is probably because it was. Jarry was not a sober fellow (drug and alcohol abuse likely caused a fatal case of tuberculosis), yet he managed to influence numerous 20th century writers including Philip Dick, who wrote the story that inspired Blade Runner, and laid the groundwork for the Theatre of the Absurd movement (Samuel Beckett was an admirer).

Here’s the circuitous problem Descartes ran into: even if we can answer a question like “what caused God?” or “what’s real” we’ll still wonder what caused the cause or if what we call reality is, in fact, real, ad infinitum. Yet where Descartes failed modern art thrived. The erudite French philosopher sparked our metaphysical and epistemological urges to wonder about the Truth and Reality with intense skepticism, setting the stage for filmmakers, writers and artists of the last 150 years to explore this craving with a more creative lens.

They did this because they were in on a secret, even if they didn't realize it: the pleasure of philosophical skepticism is exploring the questions, not answering them. The Matrix doesn't solve Descartes’ worries, it only promises to show you, as Morpheus says to Neo, “how deep the rabbit hole goes.” The ending of Inception similarly leaves the audience in doubt, as Cobb’s reality-testing spinning top continues to spin when the screen goes black.

Philosophers lack these theatrics as evident by the countless careers spent trying to prove, with certainty, a useless metaphysical platitude. Maybe this is because philosophers are easily lured into the false feeling that we can answer the unanswerable. Regardless, writers and filmmakers haven’t taken the bait. They know, as the cliché goes, that it’s the journey and not the destination.

There is a particular wonder one receives from thinking about why there is something rather than nothing, and realizing that if we somehow answered that question, we would just ask the original question all over again. This was Jarry’s insight, and I suspect it has at one point or another infiltrated every mind. If we take a clue from modern artists, it is to sustain that wonder, to explore it, but not solve it. Skepticism, after all, is Descartes’ legacy.