Harnessing relativity, technology can even give us the time to live. 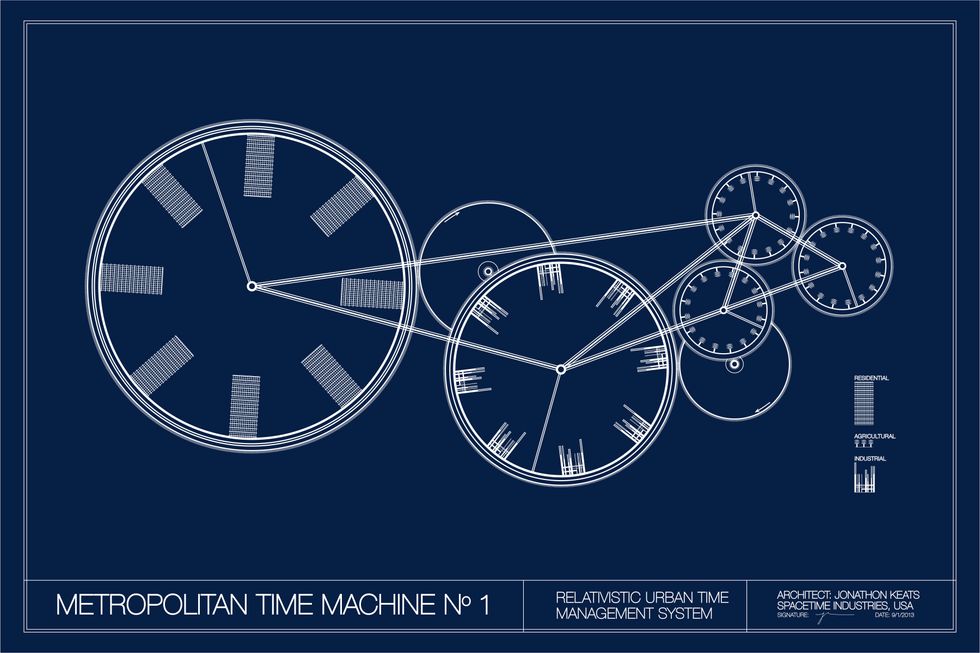 Time management is eternally popular. Tim Ferriss' 4-Hour Workweek is a bestseller. Stephen Covey's 7 Habits of Highly Effective People has sold more than 25 million copies. If Benjamin Franklin were alive today, he'd probably make a good living delivering keynote speeches. But time management has always really been a euphemism for discipline, whether imposed by corporate mandate or insinuated through the American work ethic. It's a psychological trick. That's why I'm developing new systems to manage time itself.

The essential scientific principles have been in place for a century, ever since Albert Einstein developed his theory of relativity. According to relativity, spacetime is the four-dimensional fabric of the universe, and that fabric is warped by gravity. The greater the warping by a massive object such as a star or planet, the more time dilates: A clock on Earth will run slow relative to a clock in the vacuum of space. The same is true of a clock subjected to centripetal force, which is mathematically equivalent to gravity. The faster it's spun inside a centrifuge or on a merry-go-round, the slower the clock will run relative to one that isn't being swiveled. These concepts are so fundamental that they're now taught in high school physics classes, yet they've never been technologically applied to the realm where application is most obvious. You won't read about relativity in Tim Ferriss' books, nor has it been built into any of Franklin Covey's time management tools.

Genuine time management leverages the rate that your clock is running relative to other clocks. And the best way to leverage relativity is as a community. If you build a city on an interconnected set of spinning hubs instead of solid ground, you can zone the fastest-spinning districts as residential neighborhoods and plant farms or build factories in districts that spin more slowly. That way crops will grow quickly and machinery will run efficiently from the perspective of all inhabitants.

In order to encourage this sort of relativistic time sharing, I have produced blueprints for several time-managed cities. All are available for licensing by governments and urban planners, though the technical means of rotating neighborhoods at velocities approaching the speed of light – and physically enduring the gravitational effects – will require refinement by engineers.

Given the technical challenges – and the difficulty of building consensus on anything in the United States – time-managed cities probably still belong to the realm of speculative architecture. That's why I've also developed a product for personal use: a time ingot which can be placed on a desktop or bedstand for temporal micromanagement. The time ingot is gravitational ballast. In other words, the ingot is a high-density alloy that warps the four-dimensional fabric of the universe, dilating time in your immediate vicinity.

The effect is nearly imperceptible. Users can expect a relative time difference of less than one second every billion years, but the maintenance-free simplicity of time ingots should appeal to anyone who values efficiency. Using the same kind of gravitational ballast, I'm now developing relativistic clothing – including a time warp undershirt – that will let the wearer take control of aging. These garments are currently undergoing testing. I'm trying them out myself, and I've already noticed a beneficial side effect: The heaviness makes me move more slowly and deliberately.

Technology doesn't have to make life more frenetic. Harnessing relativity, technology can even give us the time to live.

Jonathon Keats will exhibit his time management systems at Modernism Gallery, 685 Market St., San Francisco, CA. A special launch event will be held on Thursday, September 26th from 5:30 to 8:00 PM. Consultations will be available by appointment through October. More information: www.modernisminc.com.