Finding direct links between Buddhism and Western philosophy is a difficult task, but they do play out in strange loops. 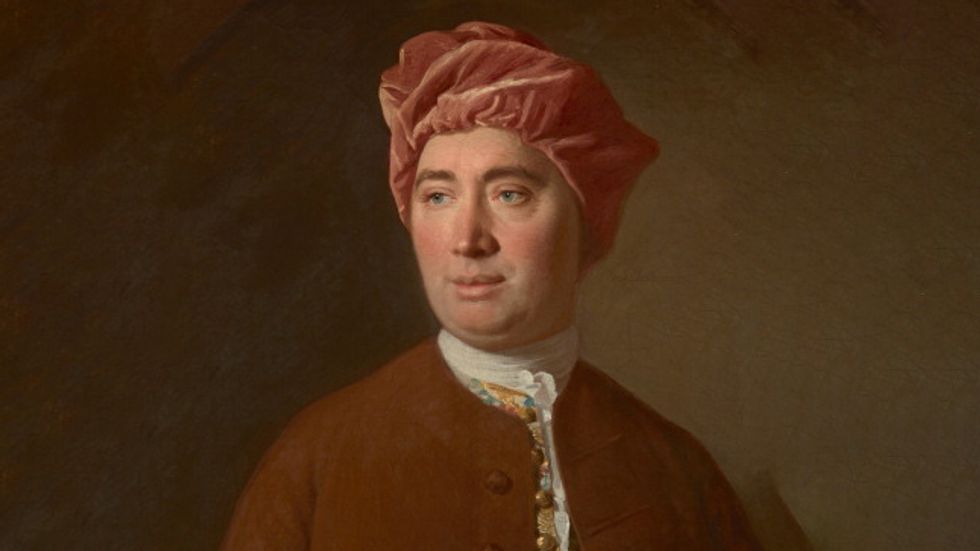 In a fascinating piece in the The Atlantic, UC Berkeley professor Alison Gopnik details her four-year journey out of a mid-life crisis via David Hume and Buddhism. The just-turned-50 Gopnik begins reading Buddhism, connects the religion’s ideas to those of the 18th century philosopher, and then launches an ambitious research project driven by the question of how Hume came up with his philosophy that was “so profoundly at odds with the Western philosophy and religion of his day.”

Hume is most famous for his rejection of the idea of an inherent self. He also had gone through a psychological crisis. To help calm his nerves, he moved to a small town in France and finished what would become one of the most substantial works of Western philosophy — A Treatise of Human Nature. Relying on the hunch that Hume would have had to have known something about Buddhist philosophy in order to write Treatise, Gopnik digs through archives and travels to Europe to discover that the Jesuit priests in that provincial French town had indeed heard of Buddhism and possibly even had copies of certain Tibetan texts. Although she admits that she can’t be certain, she determines that “Hume could indeed have known about Buddhist philosophy” at the time he wrote Treatise.

Finding direct links between Buddhism and Western philosophy is a difficult task, but they do play out in strange loops.

If true, this discovery would be remarkable because it’s widely assumed that Buddhism didn’t make it to the European continent until the 19th century. That said, Buddhism’s contributions to modern Western philosophy and religion have often been downplayed. Friedrich Nietzsche admired the religion’s complex morality while it’s been argued that Martin Heidegger may have been influenced by Zen texts. Even Arthur Schopenhauer playfully called himself, at times, "a Buddhist."

Finding direct links between Buddhism and Western philosophy is a difficult task, but they do play out in strange loops. For example, in 1879 another 50-year-old was in the midst of a personal crisis — Leo Tolstoy. The Russian novelist began reading widely and grew to reject his literary success (he even called Anna Karenina “an abomination” ). He greatly admired Buddhist texts as well as the works of Schopenhauer and began writing Confession, a short book premised on the question, “What is the meaning of life?” He developed meaning in his later years by embracing a hybrid Christianity — even synthesizing the Gospels with Zen-like clarity.

[A]s the Buddha says, “All that we are is a result of all that we’ve thought.”

Tolstoy’s The Gospel in Brief would later have an immense influence on the 20th century philosopher Ludwig Wittgenstein, who carried the book with him in the trenches during World War I. During that time, he began to write another extremely important book in Western thought — Tractatus Logico-Philosophicus. In short, the book argues that the world can be infinitely analyzed and broken into smaller parts to the point of losing perspective of any perceived whole; then at the end, Wittgenstein tells his readers that if they have understood him, they will understand what he has written is rubbish. Or, as the Buddha says, “All that we are is a result of all that we’ve thought.”

The real takeaway from Gopnik’s Atlantic article is not that Hume relied on Buddhism to write Treatise so much as it suggests the implications of the opportunity that he may have had to access it. It is no less impossible that a 25-year-old Scot would encounter Tibetan thought in an obscure French village than it would have been for a 25-year-old Austrian to happen upon Tolstoy in the midst of a world war. We are always more connected than we’d like to believe. There’s even evidence that the early Church’s missions in China attempted to blend Buddhism philosophy with Christian doctrine.

As Christian historian Diarmaid MacCulloch notes in his masterwork Christianity, The First Three Thousand Years, seventh century missionary Bishop Alopen wrote a Christian sutra that seems to be “a real attempt to suggest that the teachings of Buddhism are in a literal sense inspired by the Holy Spirit.” What if some of that thought trickled back into the European continent? Drawing parallels between Buddhism and Western philosophy does not diminish any one writer’s contributions to our culture; rather it opens us up to understanding who we think we are beyond the arbitrary distinctions of East and West.

It's an ongoing dialogue, as Thupten Jinpa explains. Jinpa has been a principal English translator to the Dalai Lama since 1985.