Being Optimistic Is Good. Knowing about Optimism Bias Is Better.

The belief that things will be better in the future is called optimism bias. Being overly optimistic can lead you to miss an important health check up or make bad financial decisions. 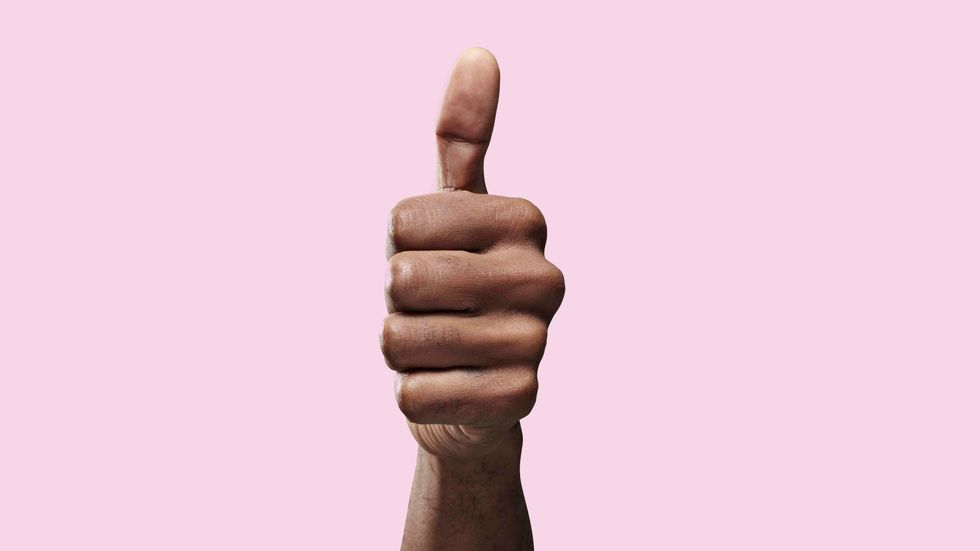 A close up of a hand doing a thumbs-up sign. (Klaus Vedfelt)

Most of us think we are prudent in how we make decisions. We weigh our options and make the best possible choice in any given situation. But the cognitive reality is that people constantly underestimate the likelihood of something bad happening to them and overestimate the chances of positive events. This belief that things will be better in the future is known as optimism bias. Being overly optimistic can lead you to miss an important health check up or make bad financial decisions. There are also larger societal implications.

Recent research by Professor Chris Dawson from UK's University of Bath, published in the Strategic Entrepreneurship Journal, points to the significant effect optimism bias has on the labor market.

The study shows how financial optimism bias is both a necessity and the Achilles's heel of entrepreneurship. Starting your own business is a very forward-looking action but you open yourself up to much uncertainty. And studies have shown that optimism is highest at such moments, especially as the fate of the business is in your hands. Notably, research asserts that optimists are more likely to be attracted to activities that inspire more optimism.

While being your own boss tends to cause greater job satisfaction, there's a downside. For one, according to studies cited by Dr. Dawson, most entrepreneurs don't do well—a few are, statistically speaking, very successful. And with the amount of money people invest in their businesses (70% on average), the return on investment is the same as if they invested in stocks that tracked the market. Too many people go into it than should, he concludes.

Optimism bias also finds its way into sports. A 2015 study of NFL fans and sports reporters found they had overly optimistic expectations of their team's success. When 1,116 fans were asked to predict how many games their team would win, the average prognostication was 9.59. As there are 16 games in total, the average should be 8. The difference, according to the research, is due to optimism bias. Getting passionate about a team makes you think they'll be more successful than can be reasonably expected.

A similar trend held among 32 ESPN reporters studied by the scientists. They were each assigned to one NFL team. When predicting their team's win total, they were also overly positive.

"Previous studies suggest that just following a team intensely can lead to bias, so that is also probably going on here. Fans and experts alike can get focused on improvements or changes for the team that they follow, and don't realize that it's an arms race with other teams who are also improving," said Professor Brad Love from University College London, the study's senior author.

Tali Sharot, a neuroscientist at University College London, wrote a book on the subject where she explores what makes our brain engage in overestimating outcomes. Dr. Sharot works in experimental psychology, exploring how people make decisions. She writes that “our brains aren't just stamped by the past. They are constantly being shaped by the future."

In her 2012 TED talk, Sharot calls optimism bias a “cognitive illusion" which 80% of us have. She also defends it as an inevitable and useful feature of the human experience, giving three reasons for why it's good to be an optimist:

1. “Whatever happens, whether you succeed or you fail, people with high expectations always feel better."

2. “Regardless of the outcome, the pure act of anticipation makes us happy."

3. “[Optimism] changes objective reality. It acts as a self-fulfilling prophecy." Being optimistic has been shown to lead to success and health benefits of reduction in anxiety and stress.

Sharon's larger point in the talk is that as long as we are aware of the our own optimism biases, we can protect our actions from its harms. But this should not ruin the optimism that we often need.

See the full talk below: