Since its 2011 debut, Game of Thrones has sparked controversy over its graphic depictions of violence.

The show is notorious for killing off characters in savagely medieval ways — by sword, lance, knife, poison, molten gold, rats, dogs, crossbow, defenestration — while leaving little to imagination. Some critics have condemned the show’s violence, particularly the scenes involving rape. But others have praised the show for accurately portraying the brutal realities of medieval life.

“First, Game of Thrones has always seemed a TV show, at its core, about presenting a more brutal and realistic vision than similar sword and sorcery epics like Lord of the Rings,” wrote Eric Deggans for NPR.  “This is a series which tries to marry the most realistic vision of Medieval-era life with a fantasy world where dragons are real.”

Critics might be split about the show’s creative decisions, like including explicit rape scenes, having characters discuss key plot elements in the nude (sexposition, as coined by a critic of the show), or showing a pregnant woman getting stabbed in the belly five times. But what’s uncontroversial is the fact that this kind of violence in popular culture is nothing new.

Violence in the works of Shakespeare

For some context, take a look at the history of what’s considered Shakespeare’s most graphic play, Titus Andronicus. The tragedy, loosely based on Roman history, is a vicious cycle of revenge between a queen, Tamora, and a general, Titus, both of whom are bent on killing and torturing each other’s children.

In one scene, Tamora’s sons take Titus’ daughter Lavinia deep into the woods where they rape her, chop off her hands, and cut out her tongue so she won’t be able to reveal what’s happened. Here’s Lavinia begging for a quick death before the scene:

Lavinia: O, keep me from their worse than killing lust

And tumble me into some loathsome pit,

Where never man’s eye may behold my body:

Do this, and be a charitable murderer.

Tamora: So should I rob my sweet sons of their fee?

No, let them satisfy their lust on thee.

Titus Andronicus is traditionally considered one of Shakespeare’s worst plays, with violence so gratuitous that it borders on farce. But Titus was extremely popular when it came out in the late 16th century.

Audiences of this time, between the Elizabethan and Jacobean eras, seemed to have a penchant for tales of revenge, and it was common for productions to feature extreme violence. And this preference wasn’t arbitrary. These plays reflected, at least in exaggeration, what life and society were really like, as theater scholar Jonas Barish wrote in his 1991 essay Shakespearean Violence: A Preliminary Survey:

“As long ago as 1940 (in Elizabethan Revenge Tragedy, 1587-1642) Fredson Bowers cited numerous instances of violent behavior in society at large—of private duels fought in disregard of the laws forbidding them, of grudge assassinations performed by hired ruffians, of the use of lingering poison and other stealthy forms of murder for disposing of one’s enemies—to demonstrate that the playwrights who brought violence onto the stage were not being merely melodramatic, not merely catering to the appetite of their audiences for bloody deeds remote from their experience, but realistic as well.”

Titus eventually fell out of fashion, and it would go largely ignored by production companies for generations. Two centuries later, in 1765, the English writer Samuel Johnson doubted whether a contemporary audience could even stomach the play:

“…the barbarity of the spectacles, and the general massacre which are here exhibited, can scarcely be conceived tolerable to any audience.”

Then in 2006, decades after the play fell somewhat back in favor with critics and historians, a production of Titus at Shakespeare’s Globe theater in the U.K. made headlines after causing some audience members to faint, feel sick and suffer sleepless nights.

Shakespeare’s other plays contain brutal scenes, too. There’s the eye-gouging in King Lear, the beheading in Macbeth, and the stabbing in Julius Caesar. 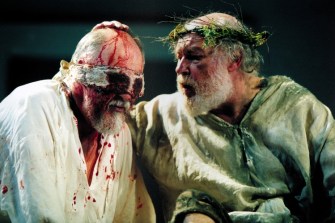 (Michael Cronin as the blinded Gloucester and Timothy West as Lear)

But how exactly does Shakespeare’s violence stack up to Game of Thrones?

The answer depends on how you measure it: qualitatively or quantitatively.

Examining body count alone, Game of Thrones is far and away more violent, as evidenced by this video of every single death in the show, compiled by Digg.

For comparison, here’s a chart showing the body count in Shakespeare’s bloodiest plays: 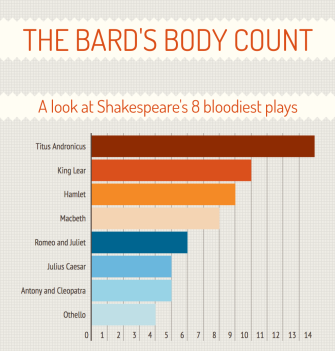 With a body count in the thousands, Game of Thrones is markedly more violent than the plays of Shakespeare. Game of Thrones also probably dispenses with its characters in more ways than Shakespeare does (I’ve listed some of the most notable manners of death above). But that’s not to say that Shakespeare was a one-trick killer, as this breakdown shows: 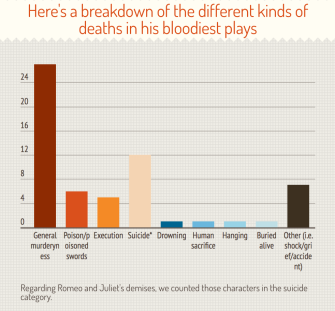 Qualitatively, deciding which set of stories is more violent is a matter of opinion. Are you more affected by the mutilation of Lavinia, or the torture scenes featuring Game of Throne’s Ramsay Bolton?

(I wonder where Reek stands?)

The answer might depend on medium. Is there any marked difference between witnessing violence on a stage versus on a screen?

Researchers plan to monitor the heart rates of 30 audience members during three live performances of Titus Andronicus. Then a second group, similar in age, gender and theater experience, will have their heart rates recorded while watching a screening of the play at a movie theater.

“We want to see how the audience reacts physically to the production,” said Becky Loftus of RSC. “Are people so used to things like (Quentin) Tarantino and Game of Thrones that they’re not shocked anymore by theater magic, or theater blood and gore?”

The results are scheduled to be published in November.

The Bomber Mafia nearly changed the world—and you've likely never heard of them.

Havana syndrome: How a “directed-energy” weapon may be injuring American intelligence operatives

U.S. officials suspect a foreign adversary is targeting American personnel with some form of "directed-energy" weapon.

Why storytelling is a powerful leadership tool

A five-year-old reading a picture book in her pillow fort. A college student and his friends at the midnight matinee. A ninety-year-old watching her soaps. What do they have in […]
Up Next
Big Think+

See the Benefits of Diversity Training Programs in These 4 Videos

Diversity in the workplace is a long-standing issue for many companies. Diversity and inclusion training programs aim to help improve interactions between employees with different backgrounds; however, getting the lessons […]