Having famous friends can be both a blessing and a burden in our oversaturated media age. But about a hundred years ago, it could be quite fun to hang out with brilliant minds and discuss earth-shattering ideas. And no friendship is perhaps any more curious than the one between the legendary American writer Mark Twain and one of the most iconoclastic minds ever – Nikola Tesla.

By many accounts, Mark Twain was fascinated by technology and electricity, in particular. Visiting New York in the 1890s, he became friends with Nikola Tesla, who had an interest in Mark Twain, having read some of his early works when he was recovering from a life-threatening illness in the 1870s. That’s before he emigrated to the United States. The books were instrumental in Tesla’s recovery, according to the scientist himself, who said the stories by Twain were “so captivating as to make me utterly forget my hopeless state.” 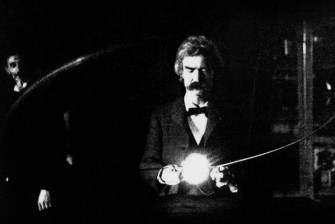 In Tesla’s Lab. 1894. Mark Twain holds Tesla’s vacuum lamp, powered by a loop of wire that gets electromagnetic energy from a Tesla coil. Tesla’s face is in the background.

Tesla got to explain this to Twain 25 years later, when they met, bringing the writer to tears.

While the life-saving power of Twain’s words and their imaginations may have been the secret sauce behind the friendship, another factor that drew them together was simply money. Twain, or Samuel Clemens as was his real name, invested in new tech, including an electrical motor in the 1880s. This fact made Tesla’s name known to Twain, who’d been hearing about the motor Tesla invented for Westinghouse. As historian Juliana Adelman wrote for Irish Times, Tesla actually advised Twain against investing into a motor created by James W. Paige – an advice the famous writer didn’t heed, losing a large sum of money on Paige’s mechanical typesetter.

In the end, Twain did think Tesla’s motor design was superior and was a frequent visitor in the inventor’s lab, even taking part in experiments. A number of photographs are testament to these fascinating interactions. One well-known story about Clemens is that Tesla cured the writer’s constipation. The author of “Tom Sawyer” took part in an experiment where he spent a considerable amount of time on an electromechanical oscillator, which generated high-frequency alternating current and featured a vibrating plate. It was also known as the “earthquake” machine for its shaking and noise.

Tesla believed it could be medically helpful to Twain, who was known to have digestive problems. Vibrations could help with constipation is how some accounts describe Tesla’s reasoning. The writer apparently did enjoy the machine for a few minutes until it started to behave like a laxative, sending him off to the restroom.

The friendship between the two titans also included Twain’s invitations for Tesla to join the Players Club in 1888 and to attend the wedding of Twain’s daughter.

The biggest nuclear blast in history came courtesy of Tsar Bomba. We could make something at least 100 times more powerful.
Strange Maps

An upstart third party is unlikely to dislodge the status quo in the current system.
The Present

Short-termism is both rooted in our most primal instincts and encouraged by runaway technological development. How can we fight it?
Up Next
Starts With A Bang

No, The Laws Of Physics Are Not The Same Forwards And Backwards In Time

A ball in mid-bounce has its past and future trajectories determined by the laws of physics, but time will only flow into the future for us. While Newton’s laws of […]