A Canadian political cartoonist started a firestorm of controversy and lost his jobs with several newspapers after drawing an image of Donald Trump asking two dead migrants if he can “play through.”

The cartoon heard ’round the world.

The image, in case you’ve been under a rock and haven’t seen it, is this: 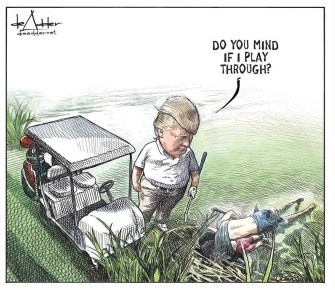 It makes obvious reference to Oscar Alberto Martinez Ramirez and his daughter Valeria who drowned in the Rio Grande after traveling more than 1,000 miles to the United States from El Salvador in search of asylum and a “better life.” It also gives a tacit broadside to President Trump’s frank response to the tragedy — “If they changed the laws you wouldn’t have that.”

So why was the cartoonist canned, exactly?

The cartoon was drawn by Michael de Adder, a popular freelance cartoonist in Canada. He claims that after thousands of people shared the image on Facebook and Twitter that all the major newspapers in the Canadian province of New Brunswick dismissed him.

Many immediately blasted the publications for the this, with more than a few prominent voices drawing the connection between the timing of the firing and the subject matter of the cartoon. The president of the Association of Canadian Cartoonists deemed it “no coincidence” that the cartoonist was fired after lampooning the famously touchy president.

For their part, the newspapers that laid him off, all owned by Brunswick News Inc., claimed they replaced him with another cartoonist who they had been in talks with for some time. They claim they were just the victims of bad timing and not firing him over anything in particular. The second cartoonist in question, Greg Perry, has confirmed this story and has reportedly declined the job offer in the face of backlash against him on social media — he says his character has been “destroyed.”

This seems like a lot of trouble over a comic.

You’d be surprised by how much trouble a political cartoon can bring.

Many people will remember the shooting at Charlie Hebdo’s office over the cartoons it puts on its cover. Some of you may also remember the Jyllands-Posten crisis in Denmark, and the2007 Bangladesh cartoon controversy. All three of these incidents involved violence and threats as a result of the cartoons.

While the worst thing to come out of this event will likely be two cartoonists briefly out of work and some PR damage for a newspaper company, it can remind us that political cartooning has a long and interesting history of informing and influencing public opinion through satire.

Perhaps because of the immediate influence of humor, the history surrounding these caricatures is stippled with controversies and even violence.

Does this firing mean anything then?

With the confirmation of the plan to hire a different cartoonist, the whole incident loses a bit of its meaning. It all comes down to a poorly timed changing of the guard.

On the other hand, it is part of the continuing decline of political cartooning in major newspapers. The number of full-time newspaper cartoonists in the United States is now less than 100, and the decline in their numbers has been steady since the 1950s. Even back then the medium was in trouble — media outlets employed 10 percent of the number of people they had working for them at the dawn of the century.

Politico gives several suggestions for why this has been happening. It concludes that most major newspapers are happy to print non-offending syndicated cartoons and Mr. de Adder’s firing, while potentially unjust, is part of a more significant movement in the industry that would have put his job at risk sooner or later.

Terry Anderson, deputy executive director of Cartoonists Rights Network International, has also drawn attention to the “satire gap,” the perception that cartoonists are all on the left, as a possible factor in his dismissal. The idea is that a focus on being seen as non-partisan can lead to cutbacks in satire over fears that cartoons making fun of conservatives may alienate some readers.

As he told the Independent, “Cartoonists are perceived (wrongly) to be uniformly liberal and their cartoons about Trump in particular are seen (just as wrongly) as uniquely disrespectful and unwarranted.”

With the trouble print media has with keeping readers these days, you can understand why they might want to avoid alienating readers.

While the dismissal of Mr. de Adder may have been a typical, if poorly executed, change in staffing for a large newspaper syndicate, it speaks to the decline of the political cartoon as an art form that an artist was let go the same day he went viral.

However, the controversy around the firing also speaks to how powerful a well-drawn cartoon can be.

Some artifacts drown in shipwrecks, others are taken by the tide. Virtually all will vanish as a result of climate change and rising sea levels.
The Past

Rock art in northern Australia depicts marsupial lions, giant kangaroos, and other megafauna that populated the Land Down Under long ago.
High Culture

What does hell look like? Dutch painter Hieronymus Bosch shows us

Is “The Garden of Earthly Delights” by Hieronymus Bosch a condemnation of sin or a celebration of hedonism? Art historians still aren’t sure.
The Past

How did history’s geniuses make their money?

When you’re a genius, how do you make ends meet?
Up Next
Health