By his mid-30s, Edgar Allan Poe was not only weary by the hardships of poverty, but also regularly intoxicated — by more than just macabre visions. Despite this, the Gothic writer lucidly insisted that there was still a method to his madness when it came to devising poems.

In an essay titled ‘The Philosophy of Composition’, published in 1846 in Graham’s Magazine, Poe divulged how his creative process worked, particularly in regard to his most famous poem: “No one point in [The Raven’s] composition is rerferrible either to accident or intuition… the work proceeded step by step, to its completion with the precision and rigid consequence of a mathematical problem.”

That said, contrary to the popular idea that Edgar Allan Poe penned his poems in single bursts of inspiration, The Raven did not pour out from his quivering quill in one fell swoop. Rather it came about through a calculative process — one that included making some pretty notable changes, even to its avian subject.

As an example of how his mind worked, Poe describes in his essay that the bird that originally flew across the dreary scene immortalized in the poem was actually… a parrot. 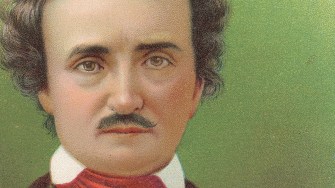 Poe had pondered ways he could have his one word refrain, “nevermore”, continuously repeated throughout the poem. With that aim, he instantly thought of a parrot because it was a creature capable of uttering words. However, as quickly as Poe had found his feathered literary device, he became as concerned with the bird’s flamboyant form as its important function.

And as it turns out, the parrot, a pretty resplendent bird, did not perch so well in Poe’s mind because it didn’t fit the mood he was going for — melancholy, “the most legitimate of all the poetical tones.” In solving this dilemma in terms of imagery, he made adjustments to its plumage, altogether transforming the parrot by bestowing it with a black raiment.

“Very naturally, a parrot, in the first instance, suggested itself, but was superseded forthwith by a Raven, as equally capable of speech, and infinitely more in keeping with the intended tone,” Poe explained in his piece in Graham’s. “I had now gone so far as the conception of a Raven — the bird of ill omen — monotonously repeating the one word, ‘Nevermore,’ at the conclusion of each stanza, in a poem of melancholy tone…”

It was with these aesthetic calculations that Poe ousted the colorful bird that first flew into his mind, and welcomed the darker one that fluttered in:

In there stepped a stately Raven of the saintly days of yore;
Not the least obeisance made he; not a minute stopped or stayed he;
But, with mien of lord or lady, perched above my chamber door—
Perched upon a bust of Pallas just above my chamber door—
Perched, and sat, and nothing more.
Then this ebony bird beguiling my sad fancy into smiling,
By the grave and stern decorum of the countenance it wore…

The details of the poem — including the bird’s appearance — needed to all blend together, like a recipe, to bring out the somber concept he was trying to convey: The descent into madness of a bereaved lover, a man lamenting the loss of a beautiful woman named Lenore. With that in mind, quoth the parrot — “nevermore” just doesn’t have the same grave effect.

If you’d like to read more about Edgar Allan Poe, click here to review how his contemporaries tried to defame him in an attempt to thwart his success.

Tags
booksdeatheducationpoetry
In this article
booksdeatheducationpoetry
Related
Thinking
Creative wisdom from Rick Rubin: embrace your inner gatekeeper
Unlock the full potential of your creativity with holistic detachment. This is the way of the editor.
Thinking
“Give a f***, actually”: The surprising benefits of being grateful for things you dislike
Radical Emotional Acceptance calls on you to celebrate all of life’s emotions — even the negative ones.
Thinking
Visual thinking: How to understand the inner lives of animals
Humans are good visual thinkers, too, but we tend to privilege verbal thinking.
The Present
How circular economics can make us happier and less stressed
Entrenched business wisdom says that community-led economic systems are pure fantasy. Douglas Rushkoff disagrees.
The Learning Curve
The art of asking the right questions
The right questions are those sparked from the joy of discovery.
Up Next
Communication
Accountability isn’t a buzzword. It’s a life raft when projects fail.
Executive coach Alisa Cohn, in her Big Think+ video, “Understand Ownership and Accountability: What It Means to Be In Charge When Things Go Wrong,” uses her experience with a company […]