Every now and then, conservators stumble upon an unseen detail that completely alters the meaning of a centuries-old image. Earlier this week, the Gemäldegalerie Alte Meister in Dresden, Germany unveiled their most recent attempt to restore Girl Reading a Letter in an Open Window, a genre painting created by the Dutch artist Johannes Vermeer in 1657.

Although the painting was once attributed to Rembrandt, it contains numerous elements that are considered characteristic of Vermeer. A drapery is pulled to the side, allowing viewers to glimpse into the private life of a female figure who, depicted in profile, engages in some kind of soft, quiet, and altogether unremarkable everyday activity, in this case, reading a letter.

Even before modern technology allowed conservators to peek underneath layers of paint without damaging them, critics suspected that Girl Reading a Letter was hiding something. Photos taken before the restoration clearly show the darkened outlines of what used to be the shadow cast by a canvas hanging on the wall.

In early 2018, the Gemäldegalerie made the decision to remove this secondary coat and reveal the painting-within-a-painting hidden underneath. The result of this risky and slightly controversial endeavor — which the gallery now advertises as an entirely “new” Vermeer — shed some light on the many mysteries surrounding this famous artwork. 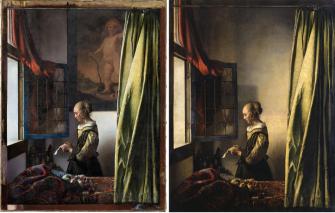 Why was Cupid’s presence in the painting not discovered sooner? One explanation is that Vermeer often incorporated empty backgrounds in his genre paintings. The wall behind The Milkmaid, for example, was left completely naked. Presumably, this was because the negative space helped bring Vermeer’s unsung heroine, the maid, into focus.

In Girl Reading a Letter, this negative space has been removed and the image of Cupid, almost as large as the girl herself, now fills up a large portion of the background. Rather than stealing the spotlight from Vermeer’s main subject, the painting-within-a-painting adds a welcome sense of harmony to what could have previously been considered an imbalanced composition.

But the presence of the love god does more than change the painting’s look and feel; it also alters its meaning. For decades, historians debated what the contents of the letter might be. In his biography of Vermeer, Norbert Schneider interpreted the wide-open window as symbolic for the outside world, arguing the painting depicted the girl’s “longing to extend her domestic sphere.”

Schneider studied the objects Vermeer scattered throughout the painting to test his argument and quickly noticed the bowl of fruit in the foreground. According to Dutch Golden Age iconography, fruit and vegetables represented love, sin, and according to Schneider, even something as specific as “extramarital relations.”

Schneider made this deduction before the painting-within-a-painting was unearthed. Once the X-rays confirmed Vermeer had originally intended to ordain the background with an image of Cupid, the historian concluded the letter was a love letter. And not just any love, but forbidden love: the bittersweet fruits of a 17th century affair.

Though a handful of Vermeer’s most striking portraits from the aforementioned Milkmaid to The Girl with the Pearl Earring were painted against an empty backdrop, the Dutch master frequently incorporated artwork from other painters in his own creations in such a way that the relationships between different images produced subtle statements like the one outlined above.

Who covered up the painting-within-a-painting?

While the Gemäldegalerie’s restoration attempt answers many questions about Girl Reading a Letter, it has also raised new ones: When was the painting-within-a-painting covered up? Who is responsible? And most importantly, why did they do it? Unfortunately, these questions cannot be answered by X-rays and lab tests alone.

Initially, critics simply assumed that Vermeer covered up the painting-within-a-painting himself, perhaps because he wanted its symbolism to be a little less obvious. However, this hypothesis was quickly rejected for a number of reasons, including the fact that the secondary coat of paint had been applied decades after the first one.

While it is possible that Vermeer revisited the painting later in life, it is unlikely he would have made any significant changes. Those familiar with his work know that similar paintings of Cupid can be found in the background of other genre paintings, including Lady Standing at a Virginal, which he completed three years before his death in 1675.

In hindsight, conservators were not all that surprised by their discovery of the painting-within-a-painting as images of Cupid decorate the backgrounds of many original Vermeers, so much so that critics speculate each individual iteration must have been based on a painting by a contemporary artist that Vermeer had in his possession.

With their discovery of a “new” Vermeer, the Gemäldegalerie offers yet another example of how modern technology can enhance our understanding of age-old artwork. A few years ago, Harvard Art Museums used specialized light installations to cover up the wear and tear on a series of murals Mark Rothko had completed in the 1960s.

More recently, the Rijksmuseum made similar strides when it used artificial intelligence software to reconstruct sections of The Night Watch that went missing more than three centuries ago. With the help of neural networks, researchers were able to translate a copy from the style of a contemporary artist into Rembrandt’s own.

Now, it is finally Vermeer’s turn. “The Delft painter’s actual intention becomes recognizable,” museum director Stephan Koja announced in a statement. “Before, we only looked at a vestige. Now, we understand it as a key image in his oeuvre. [Girl Reading a Letter] is a fundamental statement about the nature of love.”

Like some cold poison creeping up our veins, there’s a frisson in the stories and poems of Edgar Allan Poe.
High Culture

The forgotten paintings of ancient Greece and Rome

Paintings played an important role in these ancient civilizations. Unfortunately, pigment is not nearly as durable as marble.
Up Next
Starts With A Bang

The COSMOS-Webb survey will map 0.6 square degrees of the sky — about the area of three full Moons — using the James Webb Space Telescope’s Near Infrared Camera (NIRCam) instrument, while simultaneously mapping […]