Shameless self-promotion and artistic navel-gazing have gotten a scientific boost from an unexpected source. By comparing signatures in auction house transactions of over 400,000 paintings, researchers found that works by narcissistic artists sold for higher prices.

For their study, the research team utilized a Narcissistic Personality Inventory (NPI), a forty point scale which correlates an area-per-letter measure with varying degrees of narcissism. Psychological studies have linked signature sizes to narcissistic personalities since the 1970s. A bigger signature would denote a more narcissistic personality. The research paper stated that “one standard deviation increase in narcissism increases the market price by 16% and both the highest and lowest auction house estimates by about 19%.”

The term “Narcissism” comes from the Roman poet Ovid’s “Metamorphoses”, which tells the story of Narcissus, a beautiful Greek hunter who fell in love with his own reflection. He stared at it until he died.

The data set of the researchers included modern artists like Picasso, Dali and Van Gogh. Interestingly, when compared with a data set of sales by contemporary artists, the price increase was less substantial. The researchers found that “a one standard deviation increase in narcissism increases the market price of art by about 25% for modern artists and by about 13% for contemporary artists. “

Another fascinating conclusion reached by the research team, led by the Florida State University’s finance professor Yi Zhou, is that narcissistic artists did better in other opportunities: they were offered more solo and group exhibitions, and were generally ranked higher by art scholars. More narcissistic artists also tend to date their more works with greater frequency and make larger paintings.

The new paper, titled Narcissism and the art market performance and published in The European Journal of Finance, also includes additional findings on narcissism that pertain to the world of corporate finance. The researchers show that narcissism may be a constructive influence on CEOs whose performance can be singled out from group performance and be rewarded. Winning admiration can be a stimulating factor for CEOs as much as artists.

You can read the paper here. 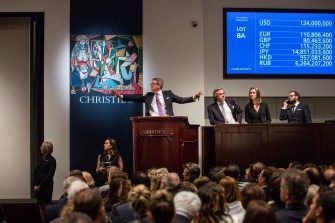 There is no long-term beneficial effect of medication on standardized test scores.
Up Next
Surprising Science

A Quick and Dirty History of Artificial Intelligence

Between Microsoft’s racist chatbot to beating the world GO champion, artificial intelligence has better things to do than whatever we’re afraid of. Here’s a recap of the highlights.