Diane Paulus is the Terrie and Bradley Bloom Artistic Director of the American Repertory Theater (A.R.T.) at Harvard University, and was selected for the 2014 TIME 100, TIME Magazine's annual[…]
Go to Profile 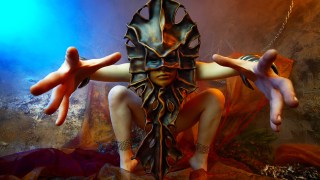 Theaters today seem like hallowed ground, says Harvard's Diane Paulus, but that's not their natural state. Once, they had the same atmosphere as sport: visceral, alive, and indebted to its audience. How can we get back there?
▸
10 min
—
with
Diane Paulus

Diane Paulus does for theatre what Susan Orlean did for orchids; she takes a subject that many think of as niche, uninteresting or eccentric and performs CPR on it through sheer passion and description.

Paulus is the Artistic Director of the American Repertory Theater (ART) at Harvard University, and is the art form’s greatest ambassador, but she isn’t so embedded in the world of theatre that she’s blind to its public perception. She can understand the knee-jerk allergy some people have to it – a hushed room with the house lights down, an invisible audience, and at times a stiff atmosphere. She knows what it’s like to fall asleep in a production better than anyone.

The fact is that theaters aren’t meant to be hallowed ground, and Paulus puts that standard down to the shift towards naturalism that occurred in the early 20th century. The old vaudeville houses were interactive; in gilded opera theatres, the lights used to stay up, the crowd as much of a spectacle and dramatic social circus as the one that was happening on stage.

Paulus likens it to sport; not all games or matches share one quiet, obedient audience. In golf, silence is customary, but in basketball, the crowd brings the energy and participates actively, even swaying the results of the game through their encouragement or distractions. Theater used to be that way too, with a spectrum of audience behaviors to match the tone of each production. The theater experience can rise out of its stagnant reputation, and for Paulus that means focusing on a theater director’s greatest collaborator: the audience.

Diane Paulus: The thing about theater is that it actually only can happen with an audience and that is a defining feature of this art form. You can write a poem, you can paint a painting put it on a wall, you can't write a book; it can exist in the world. But theater really cannot exist except with an audience. And one might say well you've got your play script in your hand, you've got your Penguin Pocket classic addition of a Shakespeare play, that's theater as literature, but live theater not only can only happen with an audience but in many ways it happens inside of the audience's head. So for me as a director I've always felt the audience is the partner. And we think in our profession you think about the writers you work with, the actors, all the people that make the art form, and yet for me the audience completes it.
And that has not always been I think a point of view that has been shared. I think because so people feel that an audience can pollute your artistic intention or bring it down or you can't pander to an audience. And I think especially in the 20th century art there was a move towards a kind of cultural elitism were there was a sense that an audience doesn't really know what they want so you've got to give them something that they may not know what they want. I think for me my roots are in a kind of populism so I have total faith and confidence in an audience and I believe an audience wants to be, yes entertained, but they also want to think; they want to be stretched; they want to feel alive; they want to feel their heart pound that's why we go to the theater.

The great thing about theater is that it is live and even though you've made a thousand decisions when you direct a production and the play has been written or the music has been scored, there is this presence of performance that can change day-to-day and it's what makes our art form so special, it's also what drives us crazy. Being a theater person I remember being in a seminar with a number of film makers and all the theater people looked at the film makers and said oh my God you've got it so easy. You get to that performance on tape and you've got it forever. And in the theater you've got to rehearse it, you've got to re-create it, maybe it happens once, in a rehearsal how do you get that actor to that level the next time when you hit the scene again, let alone eight times a week in a show that's running on Broadway?

And the funny thing is, and I'll never forget this, the filmmakers in that group said but you can change. You can change what you're doing. You can respond. And it was an anecdote that was told about Jacques Tati, a very famous filmmaker, and I've never forgotten this story that he would screen a film and then in between the showings he would go to the control booth and with the scissors try to edit the film because he had learned something from the audience and he was like madly trying to just cut and paste his film to change it based on what he had learned. And I always say to the artist I'm working with, particular actors, we get to respond. The earth is rotated. It's a new day. Events in our lives will impact what an audience is feeling when they come to the theater tonight. The air we're breathing is actually different. And if you can actually embrace that then you will achieve that kind of presents, which you can only get in the theater.

Now having said that, I think we all know we've been to the theater and you don't feel alive. I mean I have done theater all my life and I go to see a lot of theater and I've even felt that myself. You can actually go to a theater event and feel like it's hermetically sealed, like you could be there or not and you're not impacting it. You could, as an audience member, perhaps fall asleep at a show, which I've done. Which you go to any member of shows you've seen you kind of look up and down the theater and maybe somebody is sleeping and it doesn't have an impact. So I think this question of how does an audience actually impact a show is at the heart of what makes theater theater. And I think for me I, in the 21st century where I sit making shows, I want to push that presence of an audience. What do I mean by that? I want an audience to feel entitled and empowered to respond.

I do a lot of Broadway musicals and when I'm in my shows in the audience and I hear people around me singing the lyrics, I love it. I love it that an audience is so connected that they want to sing along. Now, of course, for some other audience members it drives them crazy. They turn around and they're like will you please ask that person to be quiet? I like to push theater because that's what we do in our art form to a place where an audience can express themselves like you would at a great sporting event. I often say the problem with the theater is you say what professions are you in and you say well, I do the theater. And I used to think would you ever say like oh what profession are you in? I do sports. You never say that. And there are codes of etiquette for all different kind of sporting events and you can appreciate that at a golf match, or I was just at the US Open, you have to be quiet or you'll be asked to leave. The serve goes you can't influence, you have to kind of be invisible and that's serving the concentration of the game. You go to a basketball game you're behind the net and it's a foul shot, you're supposed to pick up your foam finger and like to do everything you can to distract the player. That's your job as an audience.

So those are two different audience behaviors all on this continuum of sports and I think we tend to feel that in the theater your job, because most of us have this experience when you go to the theater as an audience, you arrive; you get your program; you might arrive with friends but you then sit in a line in seats bolted to the floor; the lights go out; you're supposed to be quiet. If you talk back to the stage you probably will be asked to leave because that's not good audience behavior. And then the show happens you either are very entertained, you cry, you laugh, maybe you fall asleep; the show ends; you applaud; the usher says please leave. And to me that's not the history of theater. That's one example of a behavior of theater and that behavior was very much defined by a radical turn at the beginning of the 20th century with naturalism. When we were coming out of a time of public spectical theater and Vaudeville houses in America where you talked back and there was this radical movement of like no, the audience should be invisible. You should be a voyeur looking through a peephole. And that's right in the line with Richard Wagner saying, "I can't stand the polluting of the art form. Turn the lights out. Put the audience in the dark."

The audiences weren't in the dark always. The audience was lit in the theater because that was part of the social experience. You went to the theater not only to see a show but you went to the theater to be seen and be seen. A 19th-century opera house with its gold guild ornate balconies and chandeliers was like the modern day nightclub, you know, you were watching an incredibly evocative opera but you were also looking at who was in the box and sort of flirting with them because that's what you did and it was a social space. And it was radical to say put all that aside. That's all distraction. Let's be invisible. Let's just silently watch. And all the art that came out of that, you know, the Stanislavski and Chekhov, that was radical in its time. But I think we've inherited that and we think that's all theater is or can be. And I now believe that if we're going to make the theater vital and necessary we have to return it to its roots where the audience's voice matters.