Halloween is upon us. The leaves are fading in certain parts of the land and nightfall creeps into the day’s domain. It’s the time of the season where spectral guests are afoot and hobgoblins lurk in the shadows. For our horror freaks and fans, Halloween is like the awards season for all things ghoulish, mad and occult.

H.P. Lovecraft is the guest of honor in the halls of horror. Nearly unknown when he was alive, Lovecraft is now regarded as one of the most prolific writers of the 20th century. His unparalleled foresight into the strange expanse of the infinite universe produced something today we now call cosmic horror.

This genre has found its way into popular shows like Stranger Things, where unfathomable inter-dimensional creatures slip in and out of the small fictional town of Hawkins, Indiana.

Many writers inspired by Lovecraft still weave stories into the mythos he created. From the depths of the unknown we bring you some of the scariest monsters from the Lovecraft universe.

To quote from Lovecraft’s grimoire, the Necronomicon:

“Their hand is at your throats, yet ye see Them not; and Their habitation is even one with your guarded threshold.” 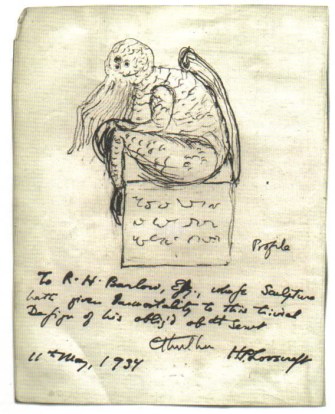 Cthulhu is the quintessential Lovecraftian god monster. It’s what first comes to mind when people think about Lovecraft’s writings. Throughout the years, we’ve been inundated with tremendous amount of grotesque monsters, demons and deities through our television screens. But Cthulhu remains chillingly eery because of what it represents.

The idea that we’re not alone and not only that, the rest of the forces in the cosmos don’t care about us. We are as insignificant as a tick. And just about as helpless against these monstrous forces as well.

Cthulhu embodies this absolute existential horror in the way it affects its followers. They’re not going insane per say, but waking up to the truth of their infinitesimal place in the roaring machinations of an uncaring universe.

Oh yeah and Cthulhu also looks like “a mix of an octopus, dragon, and a human caricature… a monster of vaguely anthropoid outline, but with an octopus-like head whose face was a mass of feelers, a scaly, rubbery-looking body, prodigious claws on hind and fore feet, and long, narrow wings behind. This thing, which seemed instinct with a fearsome and unnatural malignancy, was of a somewhat bloated corpulence..” 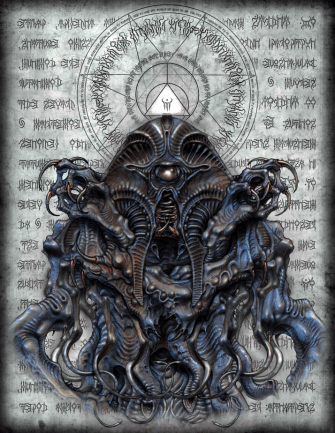 Nyarlathotep is also known as the crawling chaos. It is an evil god that can shapeshift into over a thousand different forms. The character was first found in Lovecraft’s poem titled Nyarlathotep. It was published in 1920 and is part of the original Lovecraftian canon. This being also appeared in a few other stories published throughout the years.

This beast is so scary that like the sight of a basilisk, one glance is enough to drive a man insane. When it assumes the form of a human, it turns into an Egyptian Pharaoh. Under the auspices of humanity, this sinister man reels in followers with his slick tongue and turn of a phrase.

On the subject of the character, Lovecraft remarked:

“I had never heard the name NYARLATHOTEP before, but seemed to understand the allusion. Nyarlathotep was a kind of itinerant showman or lecturer who held forth in public halls and aroused widespread fear and discussion with his exhibitions.” 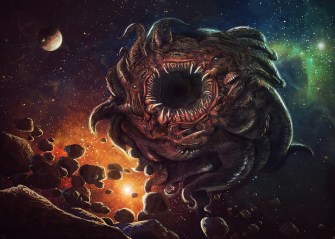 At the source of all of these great beings is Azathoth or “The Blind Idiot God or Nuclear Chaos.” This omnipotent source of energy is like some protoplasm all encompassing singularity. Its first appearance was in Lovecraft’s “The Dream-Quest.”

Azathoth is said to float either in the center of our universe or within some kind of hyperspatial non-entity realm where it is kept in a state of eternal slumber. Less powerful deities lull the god to sleep with cosmic music. It’s said that if Azathoth were to awaken just for a moment, it would destroy the world as we know it for the human race. 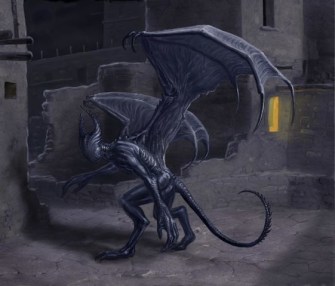 Slithering through the blackened halls of night, Night Gaunts give us the archetypal image of devils and demons. This fictional race of creatures appears in Lovecraft’s poem titled “Night-Gaunts” as well as in his novella, “The Dream Quest of Unknown Kadath.”

Nightgaunts serve many gods and sometimes capture people climbing the mountains in the Dreamlands. They were inspired by nightmares Lovecraft had in his youth.

“Shocking and uncouth black beings with smooth, oily, whale-like surfaces, unpleasant horns that curved inward toward each other, bat-wings whose beating made no sound, ugly prehensile paws, and barbed tails that lashed needlessly and disquietingly. And worst of all, they never spoke or laughed, and never smiled because they had no faces at all to smile with, but only a suggestive blankness where a face ought to be. All they ever did was clutch and fly and tickle; that was the way of night-gaunts.” 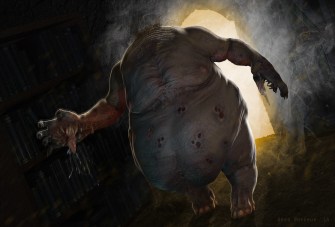 Y’golonac is not a creation of Lovecraft’s, but one from legendary horror writer Ramsay Campbell. Rising from the nebulous netherrealms of the Cthulhu Mythos, Y’golonac is a god of pure evil and gets his kicks from torturing humans.

Just the very utterance of his name summons Y’golonac. He lives around humans and when taking their form he usually appears as a fat man with no head or neck and mouths in the palms of his hands.

“Even the minions of the Cthulhu Mythos dare not utter the sounds that define the name, Y’golonac. For fear of conjuring the great defiler from its abstracted prison of bricks in some nameless place. Once more to walk amongst those who have the capacity for sanity and rational thought. With vile possession it can take any host.With the singular hunger to rape, consume and destroy all that it covets most – but never sought.” 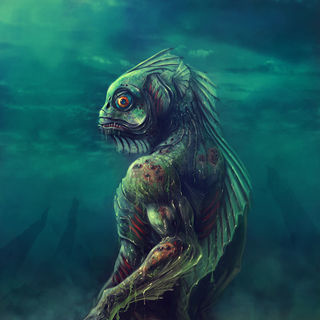 The story “Dagon” was one of the first stories Lovecraft had published as an adult. In Dagon, Lovecraft introduces the core concept of his storytelling. It was the idea that those gods humans believed in were often extraterrestrial or interdimensional entities that didn’t really care all that much for humans.

In this story, Dagon was a fish humanoid creature that crawled up from the depths of the ocean. Historically speaking, Dagon actually was the name of the god of the Philistines.

“Then suddenly I saw it. With only a slight churning to mark its rise to the surface, the thing slid into view above the dark waters. Vast, Polyphemus-like, and loathsome, it darted like a stupendous monster of nightmares to the monolith, about which it flung its gigantic scaly arms, the while it bowed its hideous head and gave vent to certain measured sounds. I think I went mad then.” 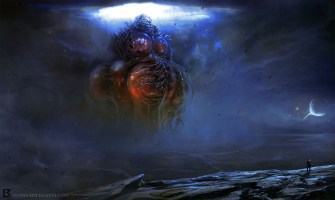 Yog-Sothoth is another incomprehensible being. It defies visualization. Although it does appear to humans usually as a mass of glowing orbs or other strange tendrils reaching out from the abyss. There is an agreement between many writers and fans that Yog-Sothoth is an omniscient being outside of the material realm, meaning that it is ultimately a god that knows all.

If you want to be an authentic person, embrace reality. Don’t try to clamber your way up Maslow’s hierarchy of needs.
Up Next
The Present

The Mega Millions jackpot has soared to a record-setting $1.6 billion after Friday’s drawing yielded no winners. Now, thousands of people are snatching up $2 tickets ahead of Tuesday’s drawing […]