A new report from UCLA’s Center for Scholars and Storytellers focused on values espoused by television programs that were popular with children 8-12 between over half a century, between 1967 to 2017. The researchers looked at how 16 values changed in importance during that span.

The most important value in 2017, the last year the study looked at, was achievement, with self-acceptance, image, popularity, and belonging to a community in the top five.

Why was fame so important in 2007? The scientists tie it to the growth of social media platforms like Facebook (launched in 2004) and YouTube (launched in 2005). Teens quickly adopted these mediums and many content-creators from that first decade of the 2000s made “fame-focused tween shows,” concluded the researchers. These platforms “which for the first time allowed anyone and everyone to seek a large audience, were brand new and seemed an essential part of the zeitgeist,” they wrote in the paper.

Studies have also shown that this rise in fame-seeking corresponded to a rise in narcissism, while empathy decreased. 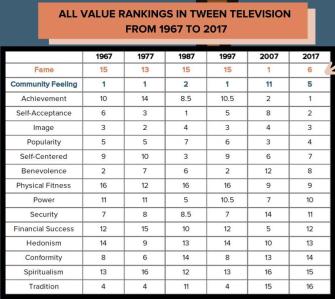 Change in values from tween television.Credit: UCLA Center for Scholars and Storytellers

Other values, like community feeling and benevolence, also fluctuated in significance through the years, according to the study. The changes in value importance were directly correlated to changes in the culture at large. The importance of community was number one or two in four of the decades but fell to 11 in 2007. Being kind and helpful was in the second spot in 1967 and 1997, but only 12th in 2007. Now it’s up to number 8.

Psychology professor Yalda Uhls, the report’s author as well as founder and executive director of the Center for Scholars and Storytellers, remarked on the trends:

“I believe that television reflects the culture, and this half-century of data shows that American culture has changed drastically,” said Uhls. “Media plays an important role as young people are developing a concept of the social world outside of their immediate environment.”

One big value shift the study pointed out has to do with the kinds of messages kids get from reality shows (evaluated since 2007) and fictional shows that are scripted.

The most popular shows among tweens in 2017, based Nielsen ratings, were “America’s Got Talent” and “American Ninja Warrior.” Among scripted shows, the top two were “Thundermans” and “Girl Meets World.” The values conveyed by the scripted shows were self-acceptance, community belonging and being kind. While in reality TV, values like fame, self-centeredness and image were promoted.

Reality shows, which are created for a wide audience, but watched frequently by tweens, tend to center on competition and the value of being the winner at something. They also celebrate tactics like bullying and cheating in order to win. 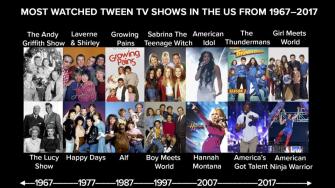 Most watched tween TV shows from 1967-2017 in the U.S.Credit: UCLA Center for Scholars and Storytellers

The report’s lead author, Agnes Varghese, a fellow of the center and a UC Riverside graduate student, explained how shows influence the kids:

“If tweens watch, admire and identify with people who mostly care about fame and winning, these values may become even more important in our culture,” shared Varghese. “Reality television shows continued to reflect the same trend we saw in 2007, with self-focused values such as fame ranking highest.”

Researchers also point out that shows, whether scripted or reality, are misleading in that they don’t really reveal the value of hard work that it takes to achieve fame, especially for an average person. This is a crucial shortcoming, considering that tweens form lifelong belief systems during these years based on what they perceive as desirable to achieve in the future.

Check out the full report here: “The Rise and Fall of Fame: Tracking the Landscape of Values Portrayed on Television from 1967 to 2017” (PDF).

When justice isn’t tempered by something such as mercy, forgiveness, or nonviolence, efforts to make society more equitable often backfire.

You open an app and start scrolling, then suddenly it’s an hour later. Sound familiar?
The Past

Some artifacts drown in shipwrecks, others are taken by the tide. Many others will vanish as a result of climate change and rising sea levels.
Up Next
Neuropsych

Vaccines and the power of positive reinforcement

People may be more willing to get vaccinated when told how popular it is.