What could add almost four and a half years to your life?

Being a woman, according to new data from the World Health Organization, which explores access to and attitudes towards health, as well as how this plays into life expectancy.

More than 141 million children will be born this year, and the boys will live 69.8 years on average, while the girls will clock up 74.2 years – a difference of 4.4 years. Life expectancy at age 60 is also greater for women than men, the data shows.

While the report on uneven access to health is published each year, this is the first time it has been split by gender. And there’s no simple explanation that can inform policy-making, the WHO says, putting the results down to a range of biological differences and gender roles around the world.

“Behind every number in the World Health Statistics is a person, a family, a community or a nation,” says Dr. Tedros Adhanom Ghebreyesus, WHO Director-General. “Our task is to use these data to make evidence-based policy decisions that move us closer to a healthier, safer, fairer world for everyone.” 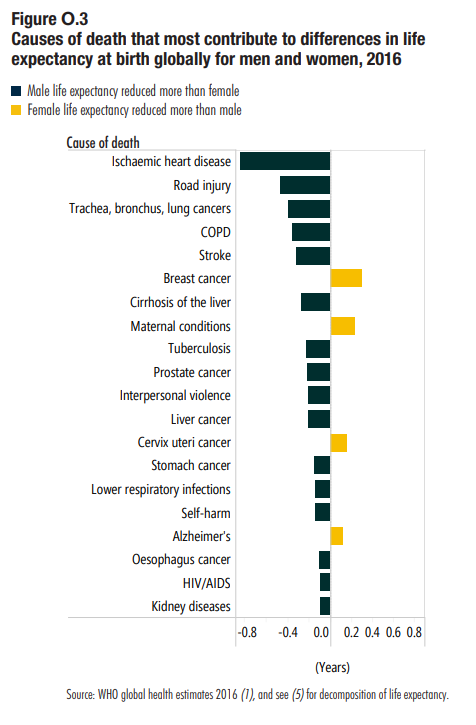 Some of the differences are ascribed to socially constructed gender roles, norms and behaviors. For example, men are more likely to be killed in a road traffic accident, reflecting the fact that — generally — more men drive and more are employed in the transport industry. Heart disease and lung cancers also kill more men.

Other differences are biological. For example, some genetic differences may lead to better survival rates among female children.

“The exact contributions that biological differences and gender roles make to health status are often difficult to determine because they do not operate independently,” the report says. 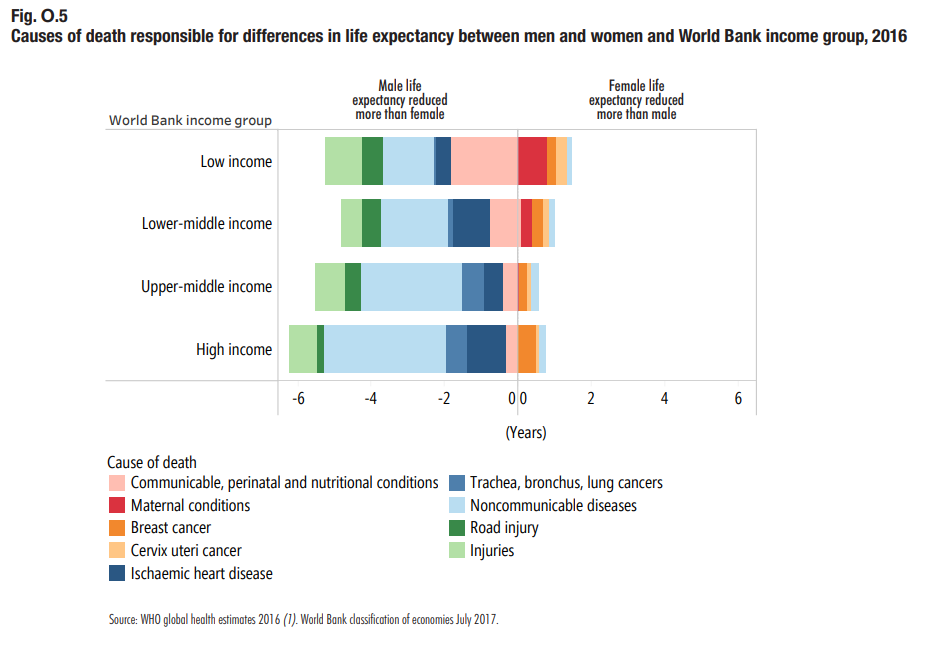 How old? Image: WHO

Differences between the health of men and women are also explored in the World Economic Forum’s Global Gender Gap Report 2018, which looks at variations between countries and shows that the gender gap is smallest in heath, and largest in politics and economic participation.

The health and survival section of the report uses two indicators, one that measures the number of males to every female at birth and aims to capture “missing women” in countries that have a strong son preference, and another that looks at the gap between the number of years women and men can expect to live in good health. 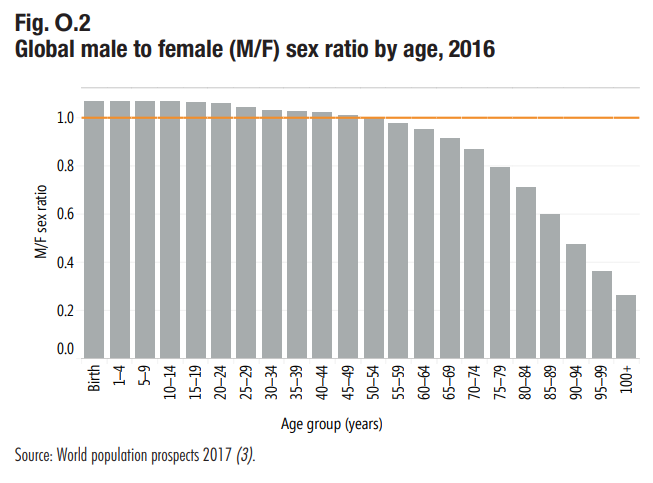 While no country has yet achieved full parity in terms of health, 74 countries have almost closed their gap, and all 149 countries have closed at least 90 percent of their gap. In India, Azerbaijan, Armenia and China, the ratio is lower, as “missing women” and gender-specific gaps on access to healthcare prevail.

“Parity has been essentially achieved in all countries in terms of life expectancy,” the report says. “Women tend to live longer in all countries, except Kuwait, Bhutan and Bahrain, where the ratio is about 99 percent.”

Are you in love? Trust your mother over your brain.
▸
with
Big Think
Up Next
Health

Breakthrough finding discovers cause of insomnia