Dualism has left a marked imprint on modern consciousness. Mind-body is an industry, including a host of philosophical protocols, physical practices, breathing exercises, juice cleanses, crystals, nootropics, and other assorted tchotchkes guaranteed to bridge the divide between brain and limbs. Thing is, that bridge is built into the framework of our animal nature. Our nervous system links everything physical and neurological.

The role of our nervous system isn’t only internal communications. Environment matters equally. Genetics gets us to the first finish line, crossing the amniotic threshold to fresh oxygen. Then we’re introduced to another starting line: nine months of hard work only to discover the work has only just begun.

For most of history, “exercise” didn’t exist. A more appropriate term would be “survival.” Physicality is our birthright. Movement is what we do. The expansive list of technologies we’ve created to offload labor has brought with it previously unthinkable diseases. In eradicating certain ailments thanks to our cognitive prowess — through vaccines, medicines, and proactive best practices — we’ve introduced (or made ourselves more susceptible to) diseases of affluence. Not moving makes us sick.

While in-depth research on how movement affects our brain makes for powerful advertising to the unmotivated, as well as verification that the motivated have reason for their drive, it still falls into the realm of basic common sense. Only a culture that doesn’t move enough would be surprised that moving is good for them.

Yet we live in two cultures, in politics and fitness and much more. On one side, a population addicted to exercise often to the point of obsession (and self-obsession, which poses its own dangers); the other, an obesity epidemic costing the nation $147 billion annually.

There are many previously understood realities we’ve lost touch with. Perhaps our ancestors didn’t possess our intellectual heft, but they knew how to live inside of their environment. They had no choice. Imagination offers an escape, yet you couldn’t dwell there too long; there were duties to attend to and scarier animals to fend off. We’re safer than ever before, and along with that peace of security, we’re also sicker.

Among the many pieces of knowledge we’ve lost, one that keeps appearing is the necessity of understanding circadian rhythm. One recent study found that a simple blood test can reveal your best sleep practices by tapping into your optimal circadian rhythm. Now a new study, published in Cell Biology, reveals another fascinating piece of evidence as to how our bodies interact with our environment: in a resting state we burn more calories in the afternoon than at any time of day.

The study itself would be a nightmare for most of us: seven individuals, locked inside of a windowless, clockless, internetless room for 37 days. They were given a prescribed diet and sleep times. Their job was inactivity. As study coauthor Jeanne Duffy says,

Because they were doing the equivalent of circling the globe every week, their body’s internal clock could not keep up, and so it oscillated at its own pace. This allowed us to measure metabolic rate at all different biological times of day.

The lowest calorie burn was 5 a.m. The highest, 5 p.m. Roughly 130 extra calories were burned in the early evening hours than early in the morning. What this means, practically, is you likely don’t want to roll out of bed and start pushing calories into your mouth. 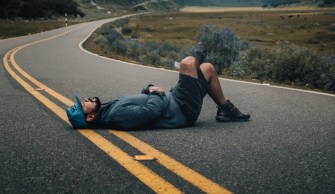 This squares with other recent studies, most notably disturbing research that tracked how many hours per day most people eat: over half the people studied eat over a 15-hour time span. Subtract sleep and they’re basically eating from first thing in the morning until right before going to bed. On the earlier side, this might result in unintended negative consequences. Duffy comments,

As the feeding window research suggests, one of the most powerful means for maintaining optimal weight might be closing the feeding window by about half. Just as eating directly after waking up isn’t a time-honored tradition, neither is continuing to eat until sleep comes.

There is no singular answer as to how we’ve gotten ourselves into such a weird situation with our eating and movement habits. It’s a matter of electricity plus travel plus food storage and transportation plus modern work conditions plus technology draining our attentional capacities and willpower — the list goes on. Yet here we are.

At a time when “connection” is the promise of every emergent technology, we seem to disconnect more and more from our environment. Virtual reality isn’t that fun if Body 1.0 is a mess. The escape into alternative universes might temporarily solve the physical and psychological distress inherent in “reality” due to a rush of good-feeling neurochemicals, but like any addiction the high doesn’t last.

Separating consciousness from our bodies has been a long pursuit. It seems the closer we get, the faster we’re chasing nowhere. We are products of our environment. Our refusal to accept such only causes more pain. We might not honor sun gods any longer, but we can at least take refuge in the profound wisdom offered by following that star’s path. Every other rhythm just throws us off-beat.