Yesterday morning I was discussing body types with my workout partner. I mentioned what it would take for me to put on mass—quite a lot. At 6’3″, I’ve weighed roughly 175 pounds for 25 years. In somatotype terminology, I’m a classic ectomorph: tall and ropey, with broad shoulders (fortunately) and thin legs (unfortunately). My friend is a standard mesomorph, so it’s easier for him to put on mass, though a double-edge sword as that mass can go to his center if he’s not mindful of his diet.

Psychologist William Herbert Sheldon, Jr. dreamed up somatotypes in the 1940s to differentiate male body types. He also stereotyped each somatotype with psychological qualities that didn’t reflect reality in any way, making him a minor laughing stock on the psychology scene. Yet his body typing system remains influential, and for good reason: look around.

With so much emphasis on female bodies in the media, we sometimes forget that males have body issues too. Given the number of men I regularly see pulling up their shirts to stare at their abs in the gym, how they look is of utmost importance. And if they want to optimize their workout and diet, each one has to come to terms with their genetics.

Endomorphs are short and stocky, making it easy for them to put on muscle yet challenging to keep off fat. Mesomorphs are the average of averages, in the 5’9″ to 6’0″ range that can be bulkier or leaner. Finally, ectomorphs are the gangliest of the bunch, though, as with all types, categorization is not destiny; we can bulk up with some work or tone with plenty of lean muscle.

Within each type, Sheldon scored on a one-to-seven scale; it’s quite possible to be short and thin (like many world-class marathon runners) or tall and bulky (NBA and NFL players). Understanding what you’re best suited (or not suited) for helps you devise a plan of action.

According to the trio at Bony to Beastly, short guys are built to throw weights around: lift them above your head, push them away from you, swing them in circles. Denser bone structure supports higher loads, as in bench pressing and squatting. By design, weights are to your advantage, with shorter lever lengths and explosive force coming from thicker musculature:

An endomorph’s muscles respond well to lifting too. According to the research of Dr. Casey Butts, guys with thicker bones are able to build muscle far more easily than those with narrower bones, and ultimately become far more muscular.

By contrast, cardio is tougher; the added density creates more impact force when running. Of course, this would not affect them as much when cycling or swimming, and everyone needs to get their V02 max levels in order.

On the dietary front, BTB recommends foods rich in micronutrients while low in calories. Junk food is not your friend—but really, beyond occasional satiety, when is it? 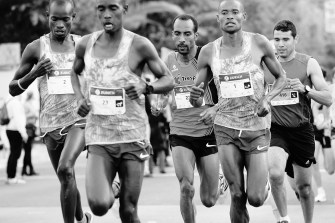 Average height has advantages, such as a tendency to be constructed with leaner middles and better muscle composition. They’re also more coordinated than guys shorter or taller then them. As can be expected, recommended workouts and diet is, well, average. You can pretty much go anywhere with it.

Common sense. They also recommend a 40-30-30 macronutrient guideline, which is the basis of The Zone diet, and where did Barry Sears get us? The problem with diets in general tend to be less on what food we’re consuming and more on what time (and how often) we’re eating. The median timeline for the majority of Americans is 14.75 hours, meaning they eat pretty much from waking to sleeping. That is not a good approach for any type. Of all the types, however, mesomorphs seem most flexible.

Ready to Run: The Secret to Injury-Free Running

Apparently, however, the tallest among us have the least problems keeping weight off—though, as BTB notes, there are plenty of overweight taller people. They advocate for 50-60 percent of calories from carbs, though as I’ve written about extensively, lowering my carb intake cleared up many long-standing problems. I’m not a fan of gorging junk food, the following makes a bit of sense, given how many shorter people I’ve known that eat very little and still cannot lose weight:

Because of our smaller appetites, rampaging metabolisms, higher carb tolerance, and higher calorie tolerance, we don’t need to focus as much on restricting junk food as the other body types. It helps to think about eating more good stuff, not less bad stuff. Otherwise, it’s going to be too hard eat enough to grow bigger, stronger muscles and denser, sturdier bones.

Finally, workouts: big cardio fans they are. Again, you have to look big picture—longer lever lengths make joints less stable. I’ve torn my labrum a few times and have had one knee surgery thanks to running. I generally stick to cycling and HIIT now, along with rowing and the assault bike. Bulking up, well…

While our hearts are strong, our bones and muscles are not. While we can quite literally run a wildebeest into the ground, we may have quite a lot of trouble picking it up afterwards.

To be clear, strength is subjective as well. Are you strong enough to pick yourself up off the ground? Can you move objects pain-free? While a fan of throwing kettlebells around, we also need to stay focused on the goal: living a healthy life. Loading is essential for your bones and muscles, especially as you age, though it’s not the final marker of health. How heavy isn’t the real issue. Sometimes “some” is an appropriate response.

Yet being realistic is important. Goals are important, but if you’re overly ambitious and unrealistic as to your type you’re only going to be disappointed. Instead of focusing on what’s not going to happen, start where you are and see what’s possible. A good roadmap is handy, but it’s never the territory.

Tags
biologyhealthhuman bodyidentitynutritionpsychology
In this article
biologyhealthhuman bodyidentitynutritionpsychology
Related
Health
New blood types are often discovered following medical disasters
New blood types are regularly discovered by an unusual absence or an unusual presence — both of which can result in tragedy.
Neuropsych
How you breathe affects your brain
Your breathing rhythm influences a wide range of behaviors, cognition, and emotion.
Health
What happens when regular porn watchers abstain for a week?
Researchers watched for signs of withdrawal — but didn’t find any.
Thinking
Why you should laugh at yourself, according to Seneca and Nietzsche
“It is more human to laugh at life than to lament it.”
Sponsored
4 misleading personal finance tips
Personal finance advice is often over-simplified and fails to consider economic research or people’s unique circumstances.
Up Next
Neuropsych
If you have this condition, you’re more likely to believe “pseudo-profound bullsh*t”
Researchers find out why some people believe utter BS.