Pretty much anyone can do a disturbingly accurate imitation of the sound of a dentists’s drill at varying speeds as it prepares a tooth cavity for filling. It’s not an experience most people savor, and it takes a special kind of person to choose to spend eight hours a day — except Wednesdays — inside other people’s mouths.

A few years ago, researchers suggested that low doses of a small molecule glycogen synthase kinase (GSK-3) antagonist — in the form of anti-Alzheimer’s drug Tideglusib — applied to a decayed area could stimulate the coronal pulp in a tooth to repair itself. Now scientists at King’s College in London have expanded upon that research and found further evidence that Tideglusib may indeed provide a pathway toward self-healing teeth. The new research is published as a paper in the Journal of Dental Research.

Drilling may still be necessary, unfortunately, to clean decay from the affected area before treatment. 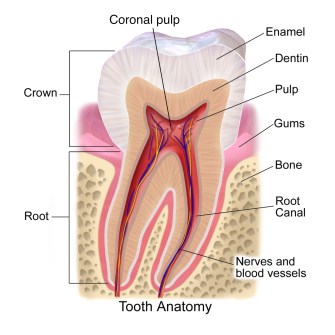 Three layers in a tooth

The are three elements to the structure of a tooth:

When you get a cavity, the outer enamel has a hole in it. With that outer protection breached, infecting bacteria nestle in, causing decay that burrows ever-deeper into the tooth, causing damage to its inner layers. To repair it using traditional methods, a dentist cleans bacteria from out the inside of cavity before filling it with a cement composite that replaces the lost natural dentin. 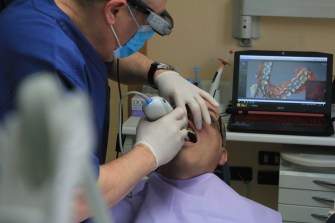 “In the last few years we showed that we can stimulate natural tooth repair by activating resident tooth stem cells. This approach is simple and cost effective. The latest results show further evidence of clinical viability and brings us another step closer to natural tooth repair.” — lead author Paul Sharpe

Share and his colleagues were interested in understanding how large a damaged area could be repaired with Tideglusib, and where, and they hoped to analyze the composition of repaired dentin in comparison to naturally occurring dentin and/or bone.

The researchers confirmed that Tideglusib can cause the generation of sufficient replacement dentin to be of use. The paper asserts that the drug can “fully repair an area of dentin damage up to 10 times larger.” More than enough to be of value.

Second, Sharpe and his team learned that Tideglusib works only on a particular kind of tooth material: the coronal pulp, that region of pulp extending to the crown of the tooth. They also learned that the drug must be applied only to the affected area to be effective, finding that untreated areas of pulp, notably the root pulp, are not adversely affected by treatment, a good thing.

Finally, analyzing repaired dentin using Raman microspectroscopy, the researchers determined that the generated dentin is chemically quite similar to natural dentin, being comprised of a similar ratios of carbonate and phosphate and mineral-to-matrix as natural dentin.

One limiting factor in the use of Tideglusib, therefore, is that the coronal pulp must be exposed in a cavity in order to be treated. Nonetheless, the research stands as confirmation not only of this specific drug’s talent for triggering dentin regeneration, but of something even bigger and more intriguing: That teeth have the ability to repair themselves.

There’s a great deal of investigation these days into the possibilities of humans regenerating body parts much as other animals such as salamanders and axolotls do. How far all of this research will get remains an open question for now, but undoubtedly remains one of the most exciting areas of current medical research.

“Lac-Phe” grants obese mice the benefits of exercise — without exercising. But don’t expect an “exercise pill.”
Up Next
Health

Prevention is always better than waiting .