Cholera is caused by a bacterium called Vibrio cholerae, and along and other disease-causing bacteria, it engages in something called “quorum sensing.” The word “quorum” in this context carries pretty much the same meaning as it does for human organizations where it’s the number of participants required to conduct official business. In bacteria, that means having enough bacteria present, and “business” is causing illness. Quorum sensing, then, is bacteria chemically polling the local environment to find if there are enough of their own kind to get down to making some disease. Scientists have just discovered that some bacteria-infecting viruses, such as the one above, can listen in on this chemical conversation to ascertain the optimal time to start killing the nearby bacterial population. Their research was published this month in the Cell.

“”As scientists, this is just unimaginable to us,” says Squibb Professor of molecular biology Bonnie Bassler of Princeton University. “We were delighted and skeptical at the same time. It was almost too good to be true.”

Waiting on the left, and going for the kill on the right.

The bacteria don’t actually talk, of course. They find each other via the presence of a particular molecule, DPO. If they detect enough DPO molecules nearby, says Bassler, “This tells them they have enough neighbors around to do collective behavior.”

Bassler’s grad student Justin Silpe was looking for other bacteria that perform quorum sensing using DPO when he happened across a virus, VP882, in a DNA repository, that had a receptor for DPO. (VP882 is a member of a bacteria-killing family of bacteriophages, or “phages.”) He proposed to Bassler that VP882 could “listen in” on the bacterial quorum headcount. “There’s never, ever been evidence of a virus listening in on bacterial communication,” Bassler tells NPR. “But what the heck. It’s not my job to shut down people’s creativity.”

That Silpe seemed to be right was shocking. Bassler says, “Quorum sensing is supposed to be about bacteria. But here it was on a viral genome. We were like, ‘What is that virus doing?'”

Short answer: Waiting for the right moment to replicate and burst out of its host bacterium. If the phage makes its move too soon, it’ll be stuck without another host to enter, and be done. “If there are no other hosts nearby, then the virus and all its kin just died,” Bassler tells Princeton University News. If it can wait until there’s lots of neighboring cells, it gains the opportunity to launch hundreds or thousands of offspring that explode out to new hosts. 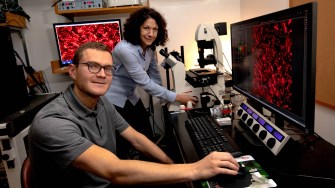 Bassler and Silpe found that when they introduced VP882 into vibrio cholerae without any DPO molecules present, the two organisms coexisted. However, “we clearly noticed that where we added DPO, the cells died,” recalls Silpe. “That was a clear indication the phage was killing them.” As a double-check that it was VP882’s detection of DPO that was triggering its killing of the bacteria, its DPO receptor was taken out of commission and reintroduced. It stopped going after the bacteria. 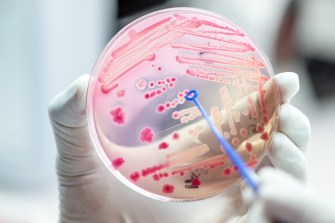 The potential of this discovery

It turns out that it’s not just VP882 that can listen for DPO. Bassler credits Silpe for his initial hunch: “He just started a brand-new field,. The idea that there’s only one example of this cross-domain communication made no sense to us. Justin discovered the first case, and then, with his discovery in hand, he went looking more deeply and he found a whole set of viruses that harbor similar capabilities. They may not all be listening in to this quorum-sensing information, but it is clear that these viruses can listen in to their hosts’ information and then use that information to kill them.”

The hope is that scientists will now be able to deliberately engineer phages to attack illness-causing bacteria. It’s an especially exciting prospect as we seem to be approaching the end of the antibiotics era as those drugs become less and less effective against resistant bugs.

“It’s a dream,” says Bassler, “that other scientists will take this initial discovery and actually make a treatment that’s safe and reliable. I sure hope somebody does that, but it’ll take a long time.”

Tags
bacteriadiscoverygeneticsmedical researchmicrobesmicrobiologyvirus
In this article
bacteriadiscoverygeneticsmedical researchmicrobesmicrobiologyvirus
Related
Life
Strange life forms create an “alien” ecosystem in an abandoned uranium mine
Slimy biofilms made up of bacterial and eukaryotic life forms have taken over an abandoned, flooded uranium mine in Germany.
Life
Scientists use CRISPR to insert an alligator gene into a catfish
Disease kills off 40% of farmed catfish. This gene protects them.
Health
COVID, RSV and the flu: A case of viral interference?
Viruses, it turns out, can block one another and take turns to dominate.
Life
Most of the seafloor is a thick graveyard of ooze
Each year, several trillion pounds of microscopic silicon-based skeletons fall down the water column to pile up into siliceous ooze.
Health
New killer CRISPR system is unlike any scientists have seen
Once activated, the CRISPR-Cas12a2 system goes on a rampage, chopping up DNA and RNA indiscriminately, causing cell death.
Up Next
The Present
“Hi-tech” Russian robot turns out to be a man in a suit
The Russian robot named “Boris”, promoted as hi-tech by state tv, was revealed to be an actor.