Though neurologists have debunked the old conventional wisdom that the human brain is cleanly divided into a right side for creativity and left for analytical thinking, it’s still the case that the two sides have their specialties. In most people the right hemisphere is denser with connections, but a new study of children and adolescents on the autism spectrum (ASD) suggests that the connections in their brains are more evenly distributed across the hemispheres than in others’. 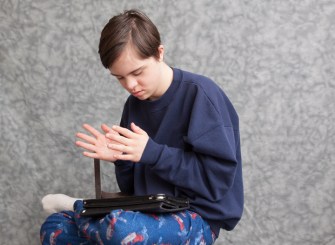 Language processing and speech are primarily handled in the left hemisphere of the brain, which also concerns itself with the processing of fine details. The right, on the other hand, works to integrate these details with other factors, including sensory input, and it’s also where auditory and visual sensory stimuli are processed. It’s assumed that the right hemisphere’s task of processing information from both hemispheres is the reason it has more connections than the left in the typical brain.

Neuropsychologists at San Diego State University’s Brain Development Imaging Lab used magnetic resonance imaging (MRI) diffusion tensor imaging to study the brains of 85 participants: 41 with ASD and 44 without. The were interested in seeing the density of brain connections throughout the brain’s white matter. The results were published in the Journal of the American Academy of Child & Adolescent Psychiatry December issue.

On the other hand, connections were more evenly distributed across the hemispheres of ASD brains. According to Ralph-Axel Müller, one of the study’s authors, “The idea behind asymmetry in the brain is that there is a division of labor between the two hemispheres. It appears this division of labor is reduced in people with autism spectrum disorder.” The study’s other authors are Ruth Carper and Jeffrey Treiber.

In people with ASD, it may be that the hemispheres are less specialized. While more study is needed, it seems like this fits with autistic people’s enhanced skill with details and trouble with integrating these details into a larger picture, referred to as “weak central coherence” in the study.

One of the unresolved questions that will require further study is this: Is the symmetricality of ASD brains the cause of being on the spectrum or the result of autism?

Parents in Spain Are Raging Against the Homework Machine

Spain and the US have very similar compulsory school hours and homework requirements. There’s a good argument for rallying against this trend.