Running seems mindless enough: you lace up, stretch, warm up and go (or so I’ve heard, ahem). Some people look to it as a workout that gives you time to think, away from distractions. Others just love running. And, of course, many runners run with the intention of exercising their bodies. A new study, though, suggests that this seemingly simple activity may also exercise the brain in surprising ways.

A just-published study by researchers at the University of Arizona in Frontiers in Human Neuroscience reveals that runners appear to have an exceptionally high amount of connectivity between areas of the brain associated with higher-level thinking, including those dealing with multitasking and concentration. They also showed less connectivity, or “anti-correlation” — in the brain’s areas associated with daydreaming and unfocused thought.

The study is based on MRI brain scans of 22 college-aged men, half of whom were competitive runners, and half of whom reported that they hadn’t exercised in the last year. (All of the subjects were male in order to avoid the difficulty of controlling for menstrual-cycle effects.) The subjects were scanned in an at-rest state, so the researchers didn’t track brain activity during running, but rather the lasting effects of the exercise — you can’t run in an MRI machine, of course. 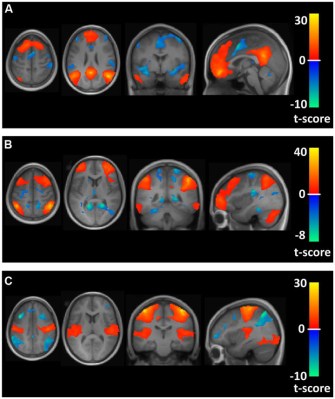 The study proposes the higher connectivity may have to do with the fact that “movement, especially at high speeds, taxes not only motor control, but can also engage executive functions, spatial navigation, and memory abilities.”

Running in the real world is, after all, a never-ending three-dimensional puzzle of constantly moving parts: muscle and other body sensations, changes in the running surface and weather, unexpected obstacles and events, and so on. One of the study’s authors, Gene E. Alexander, a professor of psychology, neurology and physical sciences, spoke about the array of mental skills running engages to the New York Times, “It requires complex navigational skills plus an ability to plan, monitor and respond to the environment, juggle memories of past runs and current conditions, and also continue with all of the sequential motor activities of running, which are, themselves, very complicated.” 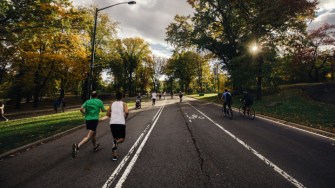 The researchers didn’t draw any conclusions about whether running makes anyone smarter — the scope of their investigation was limited to brain-area connectivity. There’s also some debate in the scientific community about the degree to which conclusions about brain activity can be drawn from at-rest scans. At the same time, the study notes that other recent research has shown that young-adult athletes do, actually, perform better on tests of executive function and processing speed tests.

The researchers’ final conclusion is that the enhanced neuroplasticity they saw in younger athletes may have implications for older adults, and “should be investigated in relation to brain aging and the potential to reduce vulnerability to cognitive aging and the risk for neurodegenerative disease,” especially since there’s already evidence that supports the idea of exercise as a tool for supporting and prolonging mental acuity in the elderly.

While the brain-training effects of other endurance sports like swimming and cycling have yet to be studied — likewise the effect of running on older adults’ brains — the possibilities are clearly intriguing. Want to improve your mind? Lace up, warm up, and go.

Only 2% of Alzheimer’s is 100% genetic. The rest is up to your daily habits.
▸
9 min
—
with
Lisa Genova
Up Next
Starts With A Bang

How the Universe changed in 2016

Galaxies that speed through the intergalactic medium will have their gas and material stripped away, but on a year-by-year basis, the changes are imperceptible. Image credit: NASA, ESA Acknowledgements: Ming […]