Samuel Hahnemann discovered cinchona, Peruvian bark, while translating Scottish physician William Cullen’s book on malaria. The German doctor left a career in medicine because he objected to practices like bloodletting, which he considered ineffectual and barbaric. Upon leaving the establishment Hahnemann supported his family by translating medical textbooks—a linguist, he spoke nine languages. Cullen’s 1789 book, A Treatise on the Materia Medica, set off a light bulb that would forever change the trajectory of Hahnemann’s career.

Inspired by the possibilities of a less dangerous approach to healing, Hahnemann slathered cinchona over his body to induce malaria-like symptoms. It remains unproven that he really developed malaria; an inflammatory reaction is possible. Undaunted, he reasoned that it would be the same for any healthy individual. This experience became the foundation of homeopathy. The idea that “like cures like” was not new, but by being its champion Hahnemann created what would become a multi-billion dollar industry. 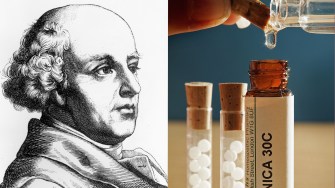 Hahnemann’s method, potentization, remains the basis of homeopathy today. To understand this process, let’s consider the most popular homeopathic flu remedy on the shelves, Oscillococcinum. One of France’s top-selling medicines, it rakes in $20 million a year in America. Yet few people know what it actually is.

Oscillococcinum is based on French physician Joseph Roy’s 1917 discovery of an oscillating bacterium he termed Oscillococcus in the blood of flu victims. Roy speculated that this bacterium was responsible for a host of diseases, ranging from eczema to cancer. Years later he discovered the same bacterium in the blood of a Long Island duckling. Never mind that no one else ever verified its existence; it was likely dust on the microscope slide.

Roy had a vision and stuck with it, evidence be damned. Today the process of potentization to manufacture Oscillococcinum begins with the heart and liver of the Muscovy duck. Technicians mix one part duck heart and liver with one hundred parts sugar in water. Then the process is repeated two hundred times. Well, lactose is continually added in; that one part duck is the only active ingredient blended in at any point.

Dilutions—a proving—for various remedies range in intensity. A homeopathic prescription claiming a potency of 6x means there’s one part active ingredient per million bits of sugar. By the time you get to 6c there is one part in ten trillion. By 13c no parts remain. A typical homeopathic medicine is 30c. Former U.S. Air Force flight surgeon and family physician Harriet Hall points out that at this level you’d need a container thirty times the sizes of the earth just to find one molecule of the initial substance. Oscillococcinum is 200c—pure sugar water.

In homeopathy, the less of an active ingredient, the stronger it is. Skirting the basic precepts of biology, most homeopathic remedies don’t only work because of placebo, they are placebo. Despite the fact that this knowledge hides in plain sight, the FDA continues to turn a blind eye, to the point where the FTC stepped in last year to require stricter regulations of claims being made on homeopathic packaging, which pull in nearly $3 billion per year in America.

Until now, that is. The FDA announced that, in a rare recent instance of consumer protection, it’s cracking down on marketing claims by manufacturers of homeopathic products. Homeopathy has long enjoyed a lack of surveillance, even though these products are legally subject to the same approval and misbranding requirements as pharmaceuticals.

The problem with current regulation is two-fold. First, claiming sugar water is responsible for curing colds or any other ailments is irresponsible. The second is more dangerous: some products do contain active ingredients—ironic, since in homeopathic lore it is a weak proving—which have not been clinically tested.

In recent years, we’ve seen a large uptick in products labeled as homeopathic that are being marketed for a wide array of diseases and conditions, from the common cold to cancer. In many cases, people may be placing their trust and money in therapies that may bring little to no benefit in combating serious ailments, or worse – that may cause significant and even irreparable harm because the products are poorly manufactured, or contain active ingredients that aren’t adequately tested or disclosed to patients.

Most homeopathic products will come through this unscathed, however. The FDA is targeting products with reported safety concerns, containing potentially dangerous ingredients, administered in ways other than oral or topical, marketed for the prevention of life-threatening diseases, aimed at vulnerable populations, or not meeting standards of quality, strength, or purity as those required under the law. 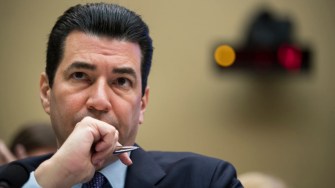 This could lead to serious problems, says Timothy Caulfield, the Canada Research Chair in Health Law and Policy at the University of Alberta and author of Is Gwyneth Paltrow Wrong About Everything? While he’s happy the FDA is finally regulating homeopathy, he says that by overlooking clinically benign products it is inadvertently endorsing their efficacy. As he told me:

Do to resource constraints, they are prioritizing the high risk products. I understand the motivation for this policy. But I fear they are implicitly endorsing the low risk stuff—which is likely most of the homeopathic products. What is a needed is a clear, blanket policy that is built on the reality that homeopathy is science-free nonsense and that any claims of efficacy— at least beyond a placebo effect—are not founded on good evidence.

The rigors and constraints pharmaceuticals have to endure to get to market are for our protection, even if the pharmaceutical industry itself has been devious when extending patents and marketing ineffective products. Homeopathic medicine today in large part thrives due to consumer concern about Big Pharma—homeopathy was nearly decimated until magical thinking made a huge comeback in the 1960s. The response to growing corporate and governmental power created a mindset that anything coming from those camps must be tainted.

That we search for solutions beyond pharmaceuticals is understandable. Yet homeopathic manufacturers are taking advantage of us in similarly criminal ways. We’re literally being sold sugar water to coat the bitter reality of the vitamin aisle’s most ineffective products. As with the rest of the sugar in the market, we gladly pay for it, ignorant of the damage it causes.

Norway Voted to Decriminalize All Drugs. Should America Follow Suit?

Norway’s decision to push drug felons through treatment is a huge step forward.