The Bill & Melinda Gates Foundation plans to pay off the $76 million debt that Nigeria owes Japan for resources used to eradicate polio.

“You might be wondering why we’re spending so much money when there’s only 12 cases,” said Jay Wenger, a medical doctor who leads the Gates Foundation’s polio eradication effort, to CNBC. “We want to be sure we finish it off.”

In the foundation’s 2017 annual letter, Bill Gates was optimistic that the end of polio was near, adding:

“…ending polio will save lives—through the magic of zero. When polio is eradicated, the world can dedicate polio funds to improving child health, and the lessons from polio will lead to better immunization systems for other diseases.” 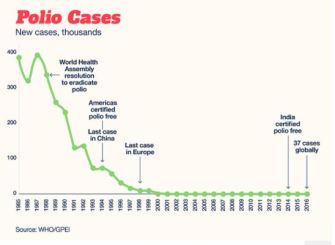 According to Quartz Africa, the Gates Foundation had agreed in 2014 to pay off Nigeria’s debt over a 20-year period if the country could achieve “more than 80% vaccination coverage in at least one round each year in very high risk areas across 80% of the country’s local government areas.”

The efforts seem to have paid off. Nigeria, which accounted for more than half of all polio cases in 2012, reported zero new cases of the infectious disease in 2017. But achieving widespread immunization in the African nation has been difficult.

One major factor that has contributed to the lingering of polio in Nigeria has been cultural opposition to immunization. This sentiment can, in part, be traced back to 2003 when a physician on a Nigerian government committee said Western medicine was “corrupted and tainted by evildoers from America and their Western allies.” 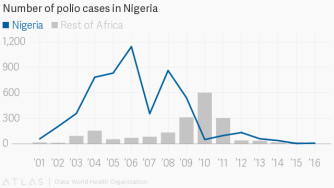 Shehu Sani, an activist and president of the Civil Rights Congress of Nigeria, told The Guardian:

“Polio vaccinations have been controversial. There are religious clerics who believe the specious argument that [the vaccination program] is an attempt to reduce the number of Muslims in northern Nigeria through sterilization. There is a constituency of opinion that has been disseminated to the general population.”

The most violent opposition to the vaccination effort occured in 2013 when a group of gunmen reportedly tied to the militant group Boko Haram shot dead nine women who were administering polio vaccines in the northern city of Kano. Several years later, in 2016, two children in Nigeria contracted polio just before the mark of a two-year streak of zero cases. Members of the Global Polio Eradication Initiative said Boko Haram's refusal to allow medical professionals to administer vaccinations in north Nigeria likely played a role in the outbreak.

Anti-polio movement in the U.S.

The U.S. has been polio-free for nearly four decades, but in the 1950s it paralyzed thousands of American children every year. Although polio is essentially harmless to most people, it’s one of the few infectious diseases that can cripple an otherwise healthy child overnight. It’s the quick-acting nature of the disease, as well as the the visible toll it took on President Franklin Delano Roosevelt, that helped it become one of the most feared infectious diseases of the 20th century.

“People tried to keep their children safe from the potentially paralyzing disease by keeping them out of public places such as pools, parks, and theaters,” said Dr. Anne Schuchat, director of the National Center for Immunization and Respiratory Diseases at the Centers for Disease Control and Prevention.

But in 1952, thanks in part to the donations of millions of Americans, a medical researcher named Jonas Salk and his team at the University of Pittsburgh School of Medicine developed the world’s first effective polio vaccine, and by 1979, the disease became completely eradicated in the U.S. Parents worldwide are now advised to have their children administered polio vaccines several times throughout childhood. This has led to the eradication of the disease in almost every country in the world except Nigeria, Afghanistan, and Pakistan.

Why polio will be eradicated

There’s good reason to believe polio will soon be gone for good.

Unlike many other infectious diseases, polio depends on human hosts for its survival—it can’t live in animals, nor can it survive outside the human body for long periods of time. So what would likely eradicate polio in its three remaining host countries, and therefore the world, would be achieving herd immunity—a robust level of resistance to a disease that occurs when a sufficient amount of a population is immunized. For polio, the herd immunity rate is estimated to be around 80 percent.

In other words, the polio virus will die off forever when it runs out of unvaccinated hosts to infect. The Gates Foundation seems confident this is a goal that can be achieved in the near future—and it's putting its money behind it.

Smallpox was nothing new in 1721.
Strange Maps

How were mRNA vaccines developed? Pfizer’s Dr Bill Gruber explains the science behind this record-breaking achievement and how it was developed without compromising safety.
▸
7 min
—
with
Pfizer
Up Next
Neuropsych

What is the physiological basis of the healing touch?

Around 100 million adults in the United States are affected by chronic pain. What can we do about it?