What makes stem cells so attractive for research is that they start off in an undifferentiated state — they’re capable of becoming anything in the human body. Working with them, scientists can construct organoids: limited-function, synthetic versions of organs or other biological structures for study. (Organoids can’t grow into independent living organisms.) However, the natural mechanism that causes embryonic stem cells to become different cell types remains an area about which not a lot is known.

Now a study identifies a particular growth factor — bone morphogenetic protein 4, or “BMP4″— that appears to be the trigger for a critical event, “symmetry breaking.” It occurs about two weeks after conception via a process called gastrulation, taking place just after an embryo attaches to its mother’s uterus. It’s a pivotal moment at which a clump of cells first begins to separate into upper and lower body regions. “Symmetry breaking drives almost everything that happens during embryonic development,” says Mijo Simunovic, a junior Fellow in the lab that conducted the research. “Our heads don’t look like our feet, and that’s because, at some point, the embryo breaks into two parts, anterior and posterior.”

The researchers’ conclusion regarding BMP4 is just part of what they’ve achieved — the study also validates the unique 3D model, or “embryoid,” they developed as being accurate enough to use in laboratory investigations of other developmental processes.

The research is published in Nature Cell Biology. 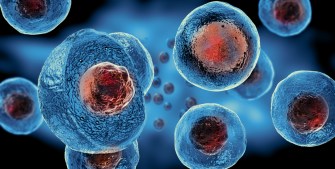 Earlier research using mouse embryoids demonstrated symmetry breaking, and it was observed in human embryonic stem cells a few years ago, leading to the hope that symmetry breaking might also occur in an experimental embryoid if the model emulated the real thing well enough.

By combining bioengineering, physics, and developmental biology, the researchers — Simunovic, Ali H. Brivanlou and Eric D. Siggia — were able to create a new type of 3D model from human embryonic stem cells. It mimics the genetics, shape, and size of a roughly 10-day-old human embryo. (Researchers are prohibited from creating embryoids whose development goes beyond that of a natural 14-day-old.)

To test their embryoid, the researchers exposed it to a range of chemical signals the placenta releases during pregnancy until they got to bone morphogenetic protein. Simunovic recalls, “We added BMP4, and two days later one part of the three-dimensional culture became the future posterior, and the opposite part became the future anterior.” 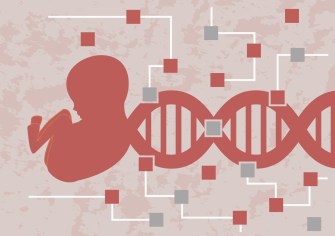 The teams’ work results in the introduction of a new type of 3D model that may lead to better understanding of pregnancy complications, such as why some embryos fail to attach to the uterus successfully. “About 50 to 75 percent of embryos do not attach, creating a huge bottleneck to pregnancy,” says Simunovic. “We don’t know why that is, but using this model we may be able to find out.”

Simunovic says that the model may also be useful in exploring developmentally incurred diseases. He says, “We can create 3D embryonic models of genetic conditions, and follow the developmental process in real time. These models can finally advance the understanding of a wide range of diseases for which we currently have no idea where and when things begin to go wrong.”

Tags
geneticshealthhuman bodyinventionmedical researchpregnancystem cellssynthetic biology
In this article
geneticshealthhuman bodyinventionmedical researchpregnancystem cellssynthetic biology
Related
Health
New blood types are often discovered following medical disasters
New blood types are regularly discovered by an unusual absence or an unusual presence — both of which can result in tragedy.
Neuropsych
How you breathe affects your brain
Your breathing rhythm influences a wide range of behaviors, cognition, and emotion.
Health
COVID, RSV and the flu: A case of viral interference?
Viruses, it turns out, can block one another and take turns to dominate.
Neuropsych
Shopping with your nose: How body odors influence your buying behavior
Sniffing out a deal.
The Past
Ceramics, corn cobs, and other strange things we used before toilet paper
Some objects were softer than others.
Up Next
The Present
Is globalization doomed? Economist Michael O’Sullivan believes so.
Why one expert believes it is knocking on death’s door.