A recent study found that one of the most powerful medieval weapons, the English longbow, was so forceful it could create wounds as bad as from modern gunshots. The bows, revealed a team of archaeologists from the University of Exeter in the UK, could break long bones and were key to military victories like the Battle of Agincourt in 1415.

This news looks to settle the long-standing debate about the impact of these weapons. No longbows from medieval times have made it intact to the present day, making their true strength somewhat of a mystery. It’s also rare to come upon signs of trauma from arrowheads.

Much of what we know about medieval warfare and injuries has come from sites like those linked to the Battle of Visby in Gotland, Sweden in 1361, and the Battle of Towton in North Yorkshire in England in 1461. Experiments have also been performed with replicas based on 16th-century longbow examples but the new paper says they did not give the full picture of how the weapons operated and what damage they could cause. The UK scientists focused their research on osteological or bone-related evidence to arrive at crucial new details. 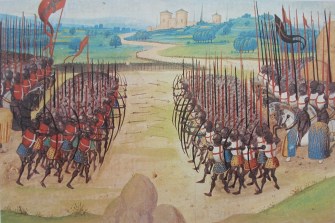 Battle of Agincourt. From an illuminated manuscript of Jean Froissart‘s Chronicles, 14th century.

While drawing upon previous studies of medieval warfare, the archaeological detectives analyzed 22 bone fragments and three teeth from the burial ground of a Dominican friary in Exeter, consecrated in 1259. They discovered a cranium with a puncture wound that started above the right eye and went all the way to the back of the head. By examining the structural elements of the wound, the researchers believe it was caused by an arrow that was spinning clockwise when it slammed into the head.

Another gruesome detail – the shaft of what was likely a diamond-shaped “bodkin” arrow probably fractured the skull even more as it was pulled back through the head on its way out.

While we already had evidence of medieval arrows with fletching, which made them spin for the sake of stability and accuracy, this may be the first finding of arrows being fletched to make them spin clockwise, reports Ars Technica.

This approach is similar to what we find in guns of today, with the researchers, led by Oliver Creighton from the University of Exeter, writing “Notably, gun manufacturers have historically rifled barrels so that bullets spin in the same—clockwise—direction.” 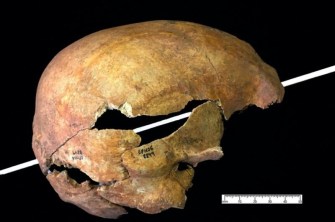 The angle of entry into a cranium found during the excavation at a medieval Dominican friary in Exeter, England.Credit: Oliver Creighton/University of Exeter

The study also analyzed another puncture wound, at the top of a right tibia. It stemmed from an arrow going through a calf and getting stuck in the bone, think the archeologists. Another wound they saw was possibly an arrow glancing off a femur bone.

Trying to reimagine what could have caused the terrible wounds, the authors propose the fatal strike at the scull took place first, with arrows puncturing the legs shortly after, when the victim was already dead. “Although this can only be a matter for speculation, this would probably account for the otherwise off angles of entry, which are hard to explain if the individual was standing up,” they wrote. Another explanation – the person could have been on a horse or standing on something “elevated”.

Highlighting the significance of their research to the site Medievalists.net, Creighton explained “In the medieval world, death caused by an arrow in the eye or the face could have special significance. Clerical writers sometimes saw the injury as a divinely ordained punishment, with the ‘arrow in the eye’ which may or may not have been sustained by King Harold II on the battlefield of Hastings in 1066 the most famous case in point. Our study brings into focus the horrific reality of such an injury.”

Check out the study published in Antiquaries Journal.

Reading between the lines of Dorothy’s adventure to the Emerald City.
Up Next
The Past

The discovery may change what we know about early humans in Europe.