Opioid painkillers are notoriously over-prescribed. In fact, about 20,000 Americans died from prescription opioid overdosing in 2015. Now new research stokes the fires even more by showing that these painkillers may actually prolong pain.

The study by a team from University of Colorado at Boulder was done on rats, but researchers warn that their results very well may have implications for humans. The study showed that morphine treatments administered over a few days actually caused chronic pain that went on for a few months. The pain was made worse because of the release of pain signals from certain immune cells in the spinal cord.

“We are showing for the first time that even a brief exposure to opioids can have long-term negative effects on pain,” said Professor Peter Grace from the CU-Boulder’s Department of Psychology and Neuroscience. “We found the treatment was contributing to the problem.”

The rather gruesome experiment consisted of researchers slicing into rats’ thighs and tying a thread around a major nerve, which swelled over time, but dissolved after 6 weeks. In ten days after injuring them, scientists gave the rats a 5-day treatment of morphine. They then measured the rats’ threshold of pain over the next 3 months by poking their hind paws with stiff nylon hairs that varied in thicknesses. After 6 weeks, morphine-treated rats were still sensitive to pokes with much finer hairs, which meant they were more sensitive to pain. It took them 12 weeks to return to the same level of pain sensitivity as the control rats that took no morphine. 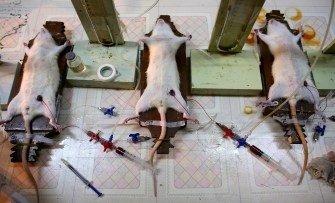 By this, researchers demonstrated that a peripheral nerve injury in rats would send a message from the damaged nerve cell to special spinal cord immune cells called “glial cells”. The first signal of pain would send glial sends into an alert mode, preparing them for more action.

Grace described this as “turning up a dimmer switch on the spinal cord.”

But after five days of treating the injury with opiods, the glial cells triggered a chain reaction, including spinal cord imflammation. As another researcher Professor Linda Watkins explained, the glial cells exploded into action, “making pain neurons go wild.”

Basically, the painkiller was accomplishing the opposite of what it was supposed to. It caused signals that would otherwhise not be there, which increased activity in pain-responsive nerve cells in the spinal cord and brain to such an extent that pain duration lasted several months. After the physical injury was healed, the rats were still in pain!

Watkins concluded that: “The implications for people taking opioids like morphine, oxycodone and methadone are great, since we show the short-term decision to take such opioids can have devastating consequences of making pain worse and longer lasting. This is a very ugly side to opioids that had not been recognized before.”

Does this mean humans should not get opioids for pain relief? Certainly, it’s too early to tell based on the results of this one study. But the study is enough of a wake-up call about the potential dark side of commonly prescribed painkillers that a further human-based study is badly needed. As Professor Grace says: “I hope that it’ll get people to really question what the benefit of long-term opioid therapy might be.”

You can read the full study here in the Proceedings of the National Academy of Sciences.

Cannabidiol (CBD) seems to reduce the unpleasantness of pain, a finding that surprised the researchers behind a new, first-of-its-kind study.
Health

The goal of this large-scale study was to provide actionable information on how to avoid depression or decrease depressive symptoms.
Health

Drugs: What America gets wrong about addiction and policy

Addiction is not a moral failure. It is a learning disorder, and viewing it otherwise stops communities and policy makers from the ultimate goal: harm reduction.
▸
19 min
—
with
Big Think
Health

A breakthrough in chronic pain relief

Researchers at the University of Copenhagen might have discovered a cure.
Up Next
Culture & Religion

Best Friends’ Strategy to Make the U.S. a Nation of No-Kill Shelters