Parental influence on their children happens long before they’re even born. We’ve long known how important a mother’s diet is for the health of her baby; we know well the dangers of smoking and drinking. Classical music might not make your child smarter, although music—such as, it turns out, the Village People—does have an effect on fetuses.

While mothers have been under scrutiny for some time, the father’s role has been less studied. For example, most of the blame for infertility falls on women, yet nearly half of all couples unable to reproduce are due to problems with men.

Wexner Medical Center physiology and cell biology researcher Kristin Stanford has now provided another important clue about infant health: exercise. In a study recently published in the journal, Diabetes, she says that men who exercise within a month of conception produce healthier babies.

The study featured two groups of mice. One group was fed a high-fat diet for three weeks; the other, a more balanced diet. Each group was split into two: one group remained sedentary, the other had plenty of exercise. After their children were born, the infant mice were given regular diets, but remained sedentary. The result:

The researchers report that adult offspring from sires who exercised had improved glucose metabolism, decreased body weight and a decreased fat mass.

Study: Dads Who Exercise Pass the Benefits to Their Children

Incredibly, exercise changes the genetic expression of their offspring. Laurie Goodyear, who co-led the study, says this could have important consequences on children moving forward.

We’re now determining if both parents exercising has even greater effects to improve metabolism and overall health of offspring. If translated to humans, this would be hugely important for the health of the next generation. 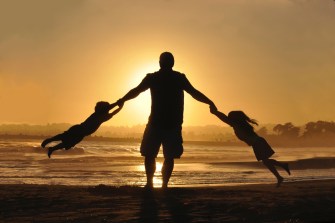 It’s easy to shake our heads at old movies featuring cigarette-smoking mothers—even more so when we see it today—but the influence we have on our children is becoming more important given all the developmental problems occurring due to poor exercise and dietary habits. Early onset diabetes is linked to the microbiome—your genetic expression directly affects your children, and yes, the food you eat matters. Another recent study shows that breastfeeding is not only better for babies, it reduces the risk of various types of cancer, type 2 diabetes, and rheumatoid arthritis in mothers.

With so much focus on the mother, emerging evidence on the father’s role is important. Though the long-standing myth that marijuana use affects fertility rates has been debunked, male obesity, for example, has a profound effect on the health of children. Standford notes,

We know that in adult men obesity impairs testosterone levels, sperm number and motility, and it decreases the number of live births. If we ask someone who’s getting ready to have a child to exercise moderately, even for a month before conception, that could have a strong effect on the health of their sperm and the long-term metabolic health of their children.

Of course, the health of parents should be considered for their own sake first, given the rigors they’ll have to endure during the first few years of their child’s life: lack of sleep, rearranged schedules, a host of lifestyle changes that will challenge them. Yet exercise is never the wrong solution. As it turns out, it plays an essential role in every stage of development, even at the very beginning.

Tags
biologyhealthhuman bodyillnessparentingphysiology
In this article
biologyhealthhuman bodyillnessparentingphysiology
Related
Health
How saliva changes the flavor of food
“It’s a liquid, but it’s not just a liquid.”
Health
New blood types are often discovered following medical disasters
New blood types are regularly discovered by an unusual absence or an unusual presence — both of which can result in tragedy.
Neuropsych
How you breathe affects your brain
Your breathing rhythm influences a wide range of behaviors, cognition, and emotion.
Health
COVID, RSV and the flu: A case of viral interference?
Viruses, it turns out, can block one another and take turns to dominate.
Neuropsych
Shopping with your nose: How body odors influence your buying behavior
Sniffing out a deal.
Up Next
Starts With A Bang
See The Universe Through The Eyes Of ALMA, The World’s Most Complex Telescope
From newborn planets to entire galaxies, we’re seeing the Universe as never before.The idea of a modern telescope is simple: collect light from a distant object, at high resolution, and record […]