Depression can steal your sex drive and leave you feeling the deepest kind of lonely. And yet, sex can not only make you feel connected to another person, but the physical and biological responses our bodies have to sex can actually minimize some of the symptoms of depression.

And then there’s anxiety. When you’re suffering from anxiety, you feel cornered, lost and stuck; not able to take any steps forward. Sex is the last thing on your mind… and yet again—the physical and biological responses our bodies have to sex can minimize those symptoms, too.

Sex might not be a cure-all (wouldn’t it be amazing if it was?) but there is a lot of evidence to prove that sex can have a positive impact on your state of mind, as well as your physical and mental health. 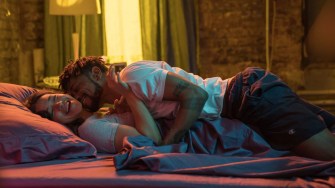 Photo: “Someone Great” via Netflix

What happens in our bodies during sex

To explain this in more detail, let’s talk about what biologically happens within our bodies when we are aroused and have sexual intercourse. This process begins before you have sex (and continues for a while after you have an orgasm), which is how having a healthy sex life can affect your moods, behaviors, and thoughts.

Arousal provokes activity in the “emotions” area of our brains

MRI studies have shown that the first thing to happen when we are aroused is that there is an increase in activity to the part of the brain that controls your emotions—this is called the limbic system.

During this initial arousal stage, a few physical things happen, as well: our blood pressure and blood flow increases, sensitive areas of our body (such as the genitals and breasts) become tender and our hearts beat faster. In general, arousal acts like an “on” switch for our bodies to prepare us for intercourse.

When it comes to having intercourse, there are many complex things happening in our bodies and brains all at once. Along with the increased blood flow that happens when we’re aroused, there is also a surge of nitric oxide released in our bodies while we have sex.

Nitric oxide molecules are essential in terms of our blood vessel health because these molecules relax the inner muscles of the blood vessels, which then causes those vessels to widen. This surge in nitric oxide explains why some areas of our bodies are tender during arousal and intercourse, and why our skin may become flushed when we are aroused.

It’s important to note that some of the side effects of nitric oxide deficiency (which you can read more about here) are irritability, depression, anxiety, insomnia, and less energy.

People who struggle with nitric oxide deficiency often experience symptoms of anxiety and depression—and the reverse is also true: people who have an influx of nitric oxide (let’s say, by having sex) can minimize their symptoms of depression and anxiety. 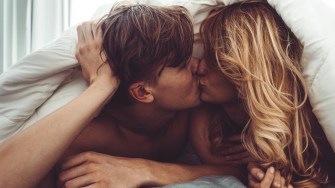 Sexual intercourse releases dopamine and serotonin, the “balancing chemicals” in our brains

An influx in nitric oxide isn’t the only thing that happens in our bodies when we have sex.

Having sexual intercourse releases some other messages from our brain to our body, as well. These messages are called neurotransmitters.

Dopamine is one of those neurotransmitters, and it plays a huge role in how we feel pleasure. Not only that, but dopamine also plays a role in motivating our brains to feel that pleasure again.

When we have sex, our bodies spread the dopamine chemical along the various major pathways of our brains. This happens during many other pleasurable activities (not just sex), and like a car that’s running smoothly until it isn’t, you likely won’t notice your body is doing this unless there is a problem with how your body carries out that function.

Dopamine deficiency can be linked to depression because our dopamine system is critical in transforming the perception of liking a reward into the motivation to seek out that reward.

Anyone who has struggled with this affliction can tell you that motivation and incentive are extremely difficult to find when you’re experiencing depression.

Now, let’s talk about serotonin because there is also an influx in serotonin when we have intercourse. Serotonin and dopamine affect many of the same things in our bodies, just in different ways. Both are equally important in regulating various bodily functions like sleep, emotions, and metabolism.

Researchers have been studying and analyzing the link between serotonin and depression for half a century now and while it was originally believed to be as simple as “low serotonin causes depression”, the reality is far more complex.

In simple terms, low serotonin isn’t a direct cause of clinical depression (as there isn’t just one cause and they are extremely difficult to pinpoint due to our complex systems). However, raising your serotonin levels has proven to be one of the most effective depression treatments.

Why? Because serotonin is known to help regulate your mood, social behaviors, emotions, appetite and digestion, sleep, memory and sex drive. Some of the more prominent symptoms of anxiety and depression include erratic sleep, bad memory, hard-to-manage emotions and mood swings that alter your social behavior.

Taking this information into account, it makes total sense that regulating some of these body functions (by having regular sex and releasing these hormone-balancing chemicals) would help decrease the symptoms of these specific mental health concerns.

We also have to talk about the epinephrine chemical that is released during sexual intercourse. Epinephrine is an adrenaline hormone. This hormone activates our sympathetic nervous system, which makes you feel that “heart pounding in your chest” kind of exhilaration you feel when you’re out for a jog, getting a new tattoo or (you guessed it) having sex.

According to Medical News Today, low levels of epinephrine can often result in physical and mental symptoms such as feeling anxious or depressed.

The “O”s are “orgasm” and “oxytocin”. Orgasms, you (hopefully) have when you have sexual intercourse. Oxytocin is the hormone that is released during orgasm.

Known as the ‘love hormone’, oxytocin is that “let’s be together forever” feeling that plays a vital role in our pleasurable climaxes as well as how our body feels after we’ve reached climax. You get a big dose of oxytocin during an orgasm, but that’s not the only time oxytocin makes an appearance. For women, oxytocin is also released during labor and while breastfeeding, which helps create that motherly bond between herself and her newborn baby.

See, oxytocin doesn’t just make you feel good, and it’s not just about feeling “in love”—but when our bodies experience surges in oxytocin we also begin to feel attachment and trust as a result of this hormone surge.

According to PET scans taken at the moment of orgasm, the reward circuits in our brains light up like fireworks and the center of reasoning and behavior temporarily shut down as you spiral into what can only be described as sexual bliss. You can see a really cool video by Rutgers University of said sexual fireworks shown in the female brain below.

Woman’s BRAIN while having an ORGASM : fMRI Scan

Knowing what we know about anxiety disorders and how easily things are overthought to the point of bringing on a panic attack, that temporary shut off of reasoning can be incredibly helpful for someone who is feeling “stuck” in their own mind.

Tags
braindepressionhappinesshealthhuman bodymental healthmindSex
In this article
braindepressionhappinesshealthhuman bodymental healthmindSex
Related
Health
The scientific highs and lows of cannibinoids
Hundreds of these cannabis-related chemicals now exist, both natural and synthetic, inspiring researchers in search of medical breakthroughs.
The Well
Can we condition ourselves to be heroes?
Neuroscientist Robert Sapolsky on the science of temptation, and the limitations of your brain’s frontal cortex.
▸
6 min
—
with
Robert M Sapolsky
Health
How saliva changes the flavor of food
“It’s a liquid, but it’s not just a liquid.”
Neuropsych
Memory and the benefits of forgetting
Forgetfulness isn’t always a “glitch” in our memories; it can be a tool to help us make sense of the present and plan for the future.
Health
New blood types are often discovered following medical disasters
New blood types are regularly discovered by an unusual absence or an unusual presence — both of which can result in tragedy.
Up Next
Hard Science
Thinking about past generations could help us tackle climate change
Researchers call this “intergenerational reciprocity.”