In his book, “Chemically Imbalanced,” University of Virginia research professor, Joseph E. Davis, questions the 20th century paradigm shift that created the belief that the brain is the last scientific frontier in understanding ourselves and the world. Neuroscience is valuable—that isn’t in dispute. An expectancy that this discipline alone holds the keys to enlightenment is what’s under debate.

Davis warns of the dangers of using biological explanations for social and personal dilemmas—namely, suffering. The entire field of psychiatry has fallen (or rather, been pushed) under the spell of brain chemistry, as I’ve repeatedly written about. Davis writes,

“Many of the claims about the relation of mind and mental states to brain are not really scientific at all and cannot themselves be tested in any empirical way. They rest no so much on a theory as on changed assumptions about human being.”

This doesn’t mean we should abandon the relationship of our brains to our bodies. We just can’t confuse correlation with causation. In some ways, we’ve been sheltering in place for two centuries, thanks to indoor climate control and electricity. This “control of nature” has caused researchers to overlook the importance of the environment on mental health.

What about actual genetic differences in brain composition, however? Are they dependent on environment? This brings us to one of the more contentious debates in biology: genetic differences between men and women. A new study, published in Proceedings of the National Academy of Sciences, is forcing us to again confront that question.

The basis of the study is sound. Armin Raznahan, Chief of the Section on Developmental Neurogenomics at the National Institute of Mental Health, has been studying sex differences since he was a PhD student. He knows the field is filled with landmines. His first study was cited in an argument for same-sex schooling, which served as a wake-up call about the dangers of publishing on the subject.

This sparked the question of the validity of using grey matter to measure social and physical functioning, as this deep dive in Wired details. Raznahan’s research found larger volumes of grey matter in men than women, though previous research has found women are better than men at facial recognition.

Grey matter is often used as evidence of stronger neurological connections. The default example is the famous London taxi driver study, which found that drivers, who have to memorize the entirety of the city to pass a rigorous test, have larger GMV in the brain’s posterior hippocampi (spatial memory and navigation) than non-taxi drivers. This line of argument has also been used by meditation researchers, who have extrapolated from GMV volume to argue that meditation helps increase memory and empathy while decreasing stress.

Back to correlation and causation. Taxi drivers must study street maps for years; mediation is a specific discipline that has measurable effects on the nervous system (beyond grey matter). In both cases, the subjects have changed their relationship to their environment, thus hinting at correlation. If anything, you can argue environmental changes cause changes in GMV.

Raznahan’s study is looking at genetic differences, yet environment still plays a role. The data was pulled from the U.S. and UK, predominantly white, wealthy countries. Comparing that data to other sets in African or Asian countries, for example, could result in a Bell Curve-type controversy—gender studies are already controversial enough. How then do you study biology when everything is polarized? 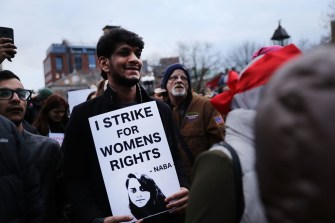 Dozens of women and men attend a rally and march in Washington Square Park for International Women’s Day on March 8, 2018 in New York City. Photo by Spencer Platt/Getty Images

One political party in America grows angry any time a connection between income disparity and ethnicity is made. We seem unable to move beyond this political wedge, especially since it fires up the base, yet it holds the key to freeing scientists to take a holistic approach. You can’t only look at changes in brain function when contemplating social differences. But you can investigate such differences if you’re trying to understand brain disorders—the focus of Raznahan’s work.

The gender question might always be with us. In 2014, Fallon Fox, a transgender MMA fighter, broke Tamikka Brents’s skull during a match. Brents later said she had “never felt the strength that I felt in a fight as I did that night.” There are real biological differences between men and women. Arguing against that is antithetical to good science.

Neuroscience will remain a sticky topic for some time, however. The methods for measuring blood flow and brain volume are, as Davis suggests above, more art than science. Until better measuring sticks are developed for understanding brain functionality, the field will be more speculative than declarative. That’s okay: scientists need to fail in order to grow. In a time when even minor failures result in ostracism, however, that’s a tough line to walk.

Environment always matters. Humans are the products of the spaces they inhabit. Genetic disorders aside, our chemistry is linked to our environment. When neuroscience is able to utilize brain scans in conjunction with sociology, real progress will be possible. Until then, controversies will abound, even where they should be none.

Heart muscle is shaped like a spiral, a mystery that has eluded scientists since 1669. New research has recreated the structure.
The Past

While becoming a monk is an evolutionary dead end for the individual, celibacy reaps benefits for the group as a whole.
Up Next
Life

Big brains come at a big cost, however.