Researchers have tried to pin down what exactly has to happen for schizophrenia to rear its ugly head, but to little avail. We know there are changes in the brain, we know that there’s some genetic component, but the real, root cause of schizophrenia remains mysterious to us.

However, a new study published in the journal Science Advances on February 6 has, at the very least, given us another clue to unraveling the origin of schizophrenia, and it’s a rather unexpected one: the gut. 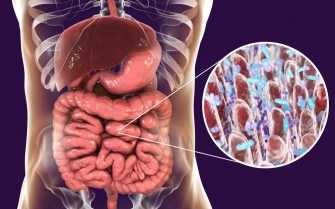 An artist’s depiction of the microbiome. In our guts are trillions of bacteria, each of which does important work for our bodies and minds. Image source: Shutterstock

The brain in your stomach

Why do our guts need these neurons? Well, part of it is that digestion is a complicated procedure, and it’s much easier to outsource that job to a dedicated workforce of neurons. But our gut also does a bit more than simply grind up and digest what’s inside our stomach and intestine. It talks to it.

The bacteria in our gut, collectively known as our microbiomes, do a lot of work for us. They help digest food and fend off disease, and, in return, we give them a home in our dark, warm, and damp interior — perfect for bacteria. So, if we want to be healthy, our microbiome needs to be healthy. When things are going well in our microbiome, we feel normal. The bacteria species in our guts pump out neuroactive chemicals, among them serotonin and dopamine, that get picked up by our peripheral nervous system and sent to our brains. When there’s something wrong in our guts, we feel it in our brains.

Researchers have found that this effect is more profound than one might think. Prior research has shown that anxiety and depression in our brains also have a corresponding change in our guts: anxious and depressed people have different microbiomes. Now, researchers have shown similar findings for schizophrenics.

How schizophrenics have different guts than healthy patients

During the study, Peng Zheng and colleagues examined the fecal matter from a sample of schizophrenics and compared them with those from healthy controls. They found that schizophrenics had strikingly low diversity of bacterial species from the Lachnospiraceae and Ruminococcaceae families, species that are normally found in abundance. In contrast, species from the Veillonellaceae family were increased in schizophrenic patients. This difference is so stark, in fact, that the fecal matter samples alone could be used to predict whether a person was schizophrenic or not.

To extend this finding, Zheng and colleagues took these fecal matter samples and transplanted them in mice — some mice received fecal matter from schizophrenics, and some from the healthy subjects. By receiving fecal matter transplants, the mice also received a dose of the donor’s microbiome.

Altogether, these findings suggest that there is, indeed, a strong link between the gut microbiome and the schizophrenic brain, perhaps even a causal one, although more research is needed to definitively say. However, the researchers do note that events that change the microbiome are associated with schizophrenia, implying a connection does indeed exist:

In the context of these findings, several events shown to influence composition of the gut microbiome, especially during the microbiome’s establishment/dynamic period in infancy — e.g., cesarean versus vaginal birth, breast versus formula feeding, or early life antibiotic treatment — have all been associated, to some degree, with risk or onset of [schizophrenia].

So, is curing schizophrenia a simple matter of fixing the microbiome of its victims? Does the origin of schizophrenia lie within our guts? These questions can only be answered by further research. But nevertheless, the present study represents an exciting direction to explore, and one that will help to treat this terrible disease.

Tags
biologyhealthillnessmicrobespsychology
In this article
biologyhealthillnessmicrobespsychology
Related
Sponsored
What childhood “money story” is shaping your financial behaviors?
Here are the signs that you inherited “money anxiety” from your parents.
How to fix your money trauma
Do you remember feeling “money shame” for the first time?
▸
7 min
—
with
Dr. Brad Klontz
Neuropsych
The most common source of awe might surprise you
It’s us.
Neuropsych
Psychology studies that go viral are likelier to be bogus
A new 20-year analysis of over 14,000 psychology studies finds that a study’s media coverage is negatively linked to its replicability.
The Learning Curve
Why do high IQ people stagnate in their careers? Emotional intelligence
Research suggests that emotional intelligence is more vital for success than IQ.
Up Next
Communication
Unconscious bias: How to recognize first and react second
Just because you have unconscious bias doesn’t mean you’re a bad person. It just makes you human. Amway’s Claire Groen cites the quote that made her feel better about her […]