A fair amount of time during the aging process seems to be dedicated to discussing what one used to be able to do. This is especially true in exercise. I used to run for this long. I used to be able to lift this amount of weight. I used to be this flexible. At some point something changes and the person stops practicing the regimen. The decline seems inevitable, creating a mindset in which people simply give up.

It’s true—bodies age and die. We have different capabilities at various ages dependent upon a variety of biological realities. Yet a new review, written by UMass Amherst biology professor Lawrence M. Schwartz and published in Frontiers in Physiology on January 25, takes the “use it or lose it” mentality to task. In a new understanding of the term, Schwartz writes that it’s really “use it or lose it, until you work at it again.”

Little is predetermined when it comes to our capabilities. Schwartz uses our ability to gain and lose muscle in his argument.

There’s hypertrophy, the process by which a muscle grows. There are a number of ways of causing this, most popularly resistance training and load bearing, but also anabolic steroids. This does not require a gym: move furniture around your apartment or work at a job that requires some amount of lifting on a regular basis and your muscles grow.

Then there’s atrophy, muscle shrinkage. Stop lifting and resisting objects and you lose it. So far, so good. The question is, is it truly lost? That is, is the loss permanent, as the adage is popularly received to mean.

As Schwartz writes, everyone generally agrees that during hypertrophy new nuclei from stem cells help muscles meet the demand of resistance training and loading. The problem is that we often think that when we stop using those muscles, the pre-existing nuclei disappear — the “lose it” aspect. Using two recent models, one rodent, the other insect, Schwartz challenges this assumption.

He points to syncytium, a special type of tissue in which cells are fused extremely close together, so much so that the network appears to be a single cell. The biggest syncytia turn out to be our muscles. Schwartz continues,

“Muscle growth is accompanied by the addition of new nuclei from stem cells to help meet the enhanced synthetic demands of larger muscle cells. This led to the assumption that a given nucleus controls a defined volume of cytoplasm — so that when a muscle shrinks or ‘atrophies’ due to disuse or disease, the number of myonuclei decreases.”

In those animal models, Schwartz points to immobilization, denervation, and sepsis as varying interventions that lead to atrophy. While no one debates the obvious muscle loss during such processes, what is under debate is varying forms of apoptosis, a form of programmed cell death. We all experience some level of it, as each of us loses between 50–70 billion cells every day. Schwartz wanted to know if atrophy causes the myonuclei to completely die during atrophy. Can what is lost ever be regained? 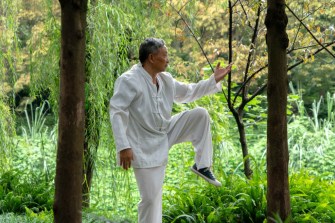 Turns out the answer is yes. Schwartz writes that teenagers “bank” muscle growth potential to help prevent frailty in old age. He states that the “condemned mononuclear cells” destroyed during atrophy reside outside of muscle fiber; the syncytial network inside the fiber is where myonuclei are stored, waiting to be revived at any age.

As he writes, it doesn’t make sense that we’d completely lose the biological catalyst for potential muscle growth at any point in our lives:

“Muscles are subject to extreme perturbations, including disruption of the sarcolemma following intense exercise, so it would be catastrophic if they triggered cell death rather than initiated tissue repair and possibly hypertrophy.”

This, he writes, is programmed into us. Humans long had to grapple with food availability, for example. While fasting is in vogue today, for much of history not eating for longs stretches was a natural course of life. Multicellular organisms would have evolved with a protective mechanism in place to ensure that during periods of extreme fasting, muscle growth was made available once a food source was secured.

What this really means for the average person is: no more excuses. Your body might not be able to tolerate the loading or resistance of your younger years, but that does not imply all is lost. It’s just sitting there waiting for the potential to again be recognized, which is where mindset comes into play. If you think your strength is truly lost, it will be, as you won’t take the steps necessary for maintaining a strong and pliable body. Just don’t think all is lost. It never is.

Here’s what it means for the field.
Up Next
Health

Chemo is our best response to cancer so far. A novel new therapy could render it obsolete.